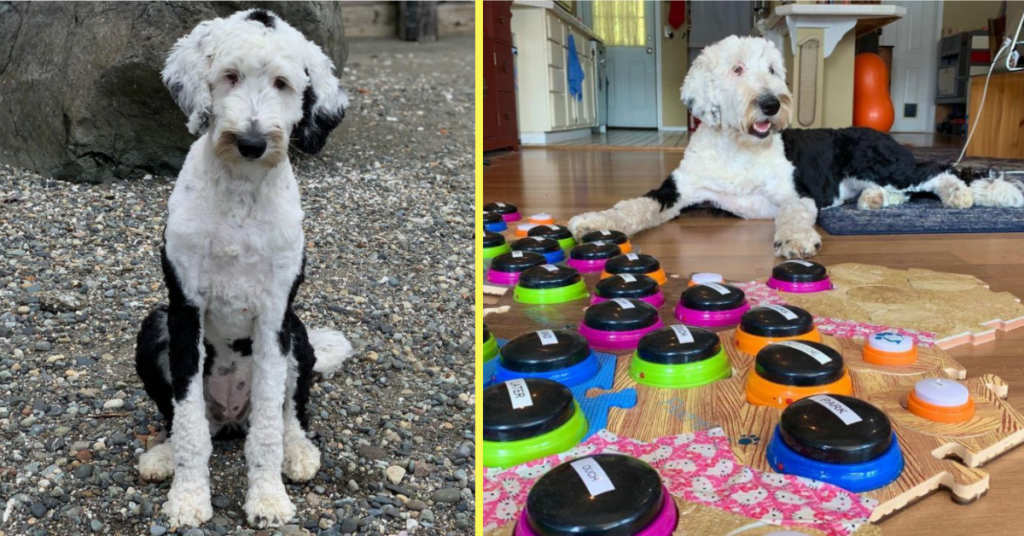 Meet the “Talking” Dog That People Are Pretty Obsessed With

Well, allow me to explain.

Meet Bunny, a Sheepadoodle who is well on her way to becoming famous because her owner has been teaching her to communicate with a system of buttons that have words and phrases on them.

And it seems to be working!

Bunny’s mom, Alexis Devine, has organized over 70 buttons with words and phrases on them into clusters of related language.

“My theory is that she memorizes their place like a keyboard.

Like, you know, pianists can play amazing music without having to look at keys — similar to that. It’s like muscle memory.”

Look at this insane layout of buttons!

The first word Bunny learned was “outside” and she’s now part of a study that’s trying to understand how dogs can understand language at the University of California, San Diego.

Alexis said that Bunny learns the meaning of each button “through a series on thousands of tiny reinforcements.”

Bunny has become a viral hit on TikTok and she now has more than 5 million followers on the platform.

Not too shabby, eh?

Here’s Bunny letting her owners know that it’s just about time to start winding down for the night because it’s getting later into the evening.

And Bunny’s even been learning about the concept of time and appears to be referencing past events.

Isn’t that amazing?!?! Be sure to follow Bunny’s adventures on social media so you can follow her excellent journey.

Can you recommend some other great animals that we should be following on social media?