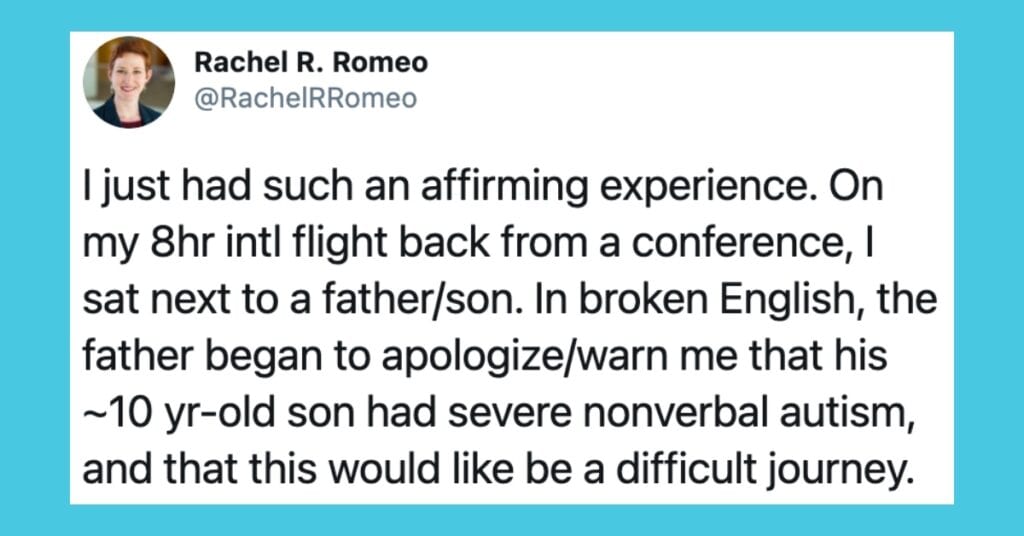 You never really know how a chance encounter might change your perspective in life or provide you with an affirming experience.

And that’s exactly what happened to a woman named Rachel R. Romeo, a speech-language pathologist who had an encounter on a plane that made a big impact on her. Romeo explained in detail what happened that day in a very interesting Twitter thread.

This is how it started.

I just had such an affirming experience. On my 8hr intl flight back from a conference, I sat next to a father/son. In broken English, the father began to apologize/warn me that his ~10 yr-old son had severe nonverbal autism, and that this would like be a difficult journey. 1/

Romeo then explained that she actually worked as a speech-language pathologist. But the flight did not start on a good note.

I told him not to worry, I was a speech-language pathologist with lots of experience with minimally verbal kiddos. Challenging behaviors began even before take off: screaming, hitting me, and grabbing for my things. The father repeatedly apologized, but did little else. 2/

Romeo then offered to try to connect with the boy and his father agreed.

I asked him how his son preferred to communicate. He didn’t seem to understand. Perhaps this was a language barrier, but I think instead the child had very little experience with communication therapy. I put away the talk I was working on & asked if I could try. He nodded. 3/

The boy was not a fan of screens, so Romeo had to improvise.

I tried to see if he was stimulable for a communication board. I started by pulling up some standard images for basic nouns on my computer but I could tell that screens really bothered him. So I summoned my god-awful drawing skills and tried to create a (very!) low-tech board. 4/

She then realized that it was working and she was connecting with the little boy! And they had plenty of time to work on it together.

And by god, it clicked. I made symbols for the things he was grabbing, for his favorite stuffed penguin, and for his dad. He took to it very quickly. I introduced way more symbols that I normally would, but hey, how often do we get an 8-hour session?! 5/

Romeo made a lot of progress with the boy during the 8-hour flight and she gave the boy’s father a paper that he would be able to use in the future to help his son.

By the end of the flight, he had made several requests, initiated several times, & his behaviors had reduced quite a bit. The father was astounded – clearly no one had ever tried an AAC approach with him. I gave him the paper & showed him how to use it, and he nearly cried. 6/

All the boy wanted to do was to be able to communicate and Romeo made that happen.

This was the human desire for communication, pure and simple. To connect with another person and share a thought. Communication is a basic human right, and I was overjoyed to help someone find it. What a privilege and a gift. 7/

Romeo realized that the experience was not only good for the young boy, but also for her as she continues on her path in the speech-language therapy field.

As I face the upcoming job cycle and the nearly endless imposter syndrome of academia, this was precisely the reminder I needed about why I love studying language/communication development. It was a good day to be an #SLP! 8/8

That is quite a story! Imagine being able to make such a difference in a short period of time!

Now we want to hear from you. Have you ever been helped by a stranger like this and it was truly life-changing?

If so, please tell us about it in the comments. We’d love to hear from you.