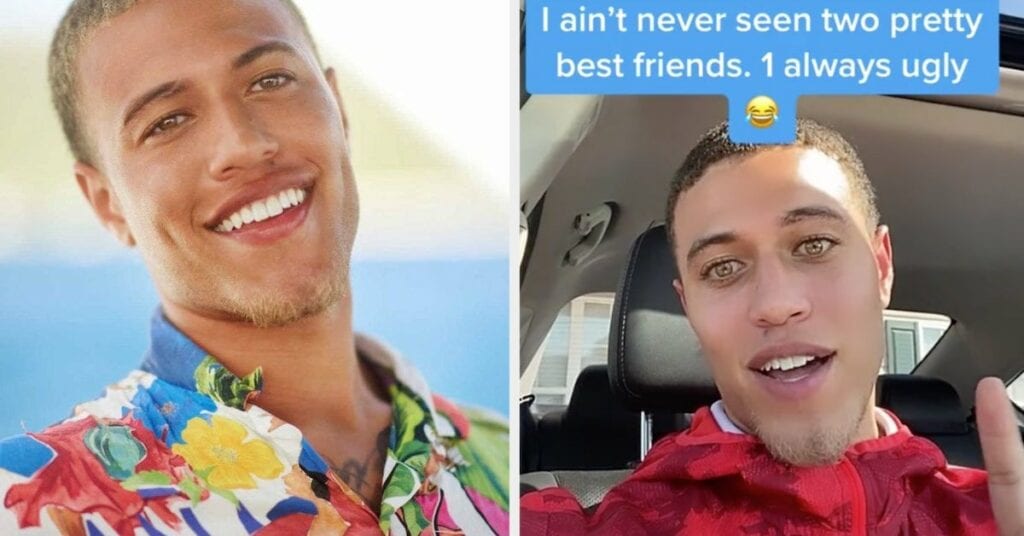 Do you ever wonder something but refrain from saying it out loud?
I sensor myself a lot.

Well maybe that’s the reason I haven’t gone viral. Because when one TikTok’r claimed that one out of every two best friends is ugly, social media went crazy.

Last October, Jordon Scott, a 24-year-old model, made exactly that audacious claim in what he thought was a run-of-the-mill TikTok video.

Most of his videos tended to be personal observations about his past failed relationships, and he gathered a huge following.

One of his highest viewed videos was just him goofing around with a filter:

He started the account to gain followers and notoriety to one day launch his modeling career in LA.

And he often demonstrates a self-deprecating humor that is hard not to like, as in this teasing video about the Super Bowl:

But last year, in a moment that he couldn’t have imaged would blow up the way it did, he said:

“I ain’t never seen two pretty best friends. It’s always one of them gotta be ugly.”

The next thing he knew, the small-town South Carolinian was going viral.

Not only did his video attract lots of likes and views (to date the video has been viewed almost 9 million times!), but in true TikTok fashion, people started using the audio clip in their own videos of the day.

Some people have been offended by the suggestion, but he’s not too worried.

When asked about the famous TikTok video, Scott said…

“I mean, have you ever seen two pretty best friends?”

“I think about the response as, all women are queens regardless… Besides, I’m not perfect by any means, but I do not let that hinder me from trying [to] create content.

You only have one life to live, so why worry about what someone else has to say when they do not have to wake up in your shoes every day?”

That same laid-back attitude shows through in many of his posts, like this one, where he poked fun at himself while riffing on the original video with his little sister:

Sometimes, though, he gets a little more serious.

And a few of his most highly rated videos touch on current events, like this response to the Covid relief bill:

Or this one, where he joked about Prince Harry leaving the royal family:

But even with the variety of videos that he’s made, the “two pretty best friends” one is still his favorite, and he hopes that it will help open more doors for him in the future.

Check it out and see what you think:

why y’all never choose another equal to be y’all best friend?? I hate when the ugly one call the pretty 1 “twin” if ur best friend bad as u tag her rn

What do you think about this guy’s POV?

Share your comments with us! We’d love to read them.