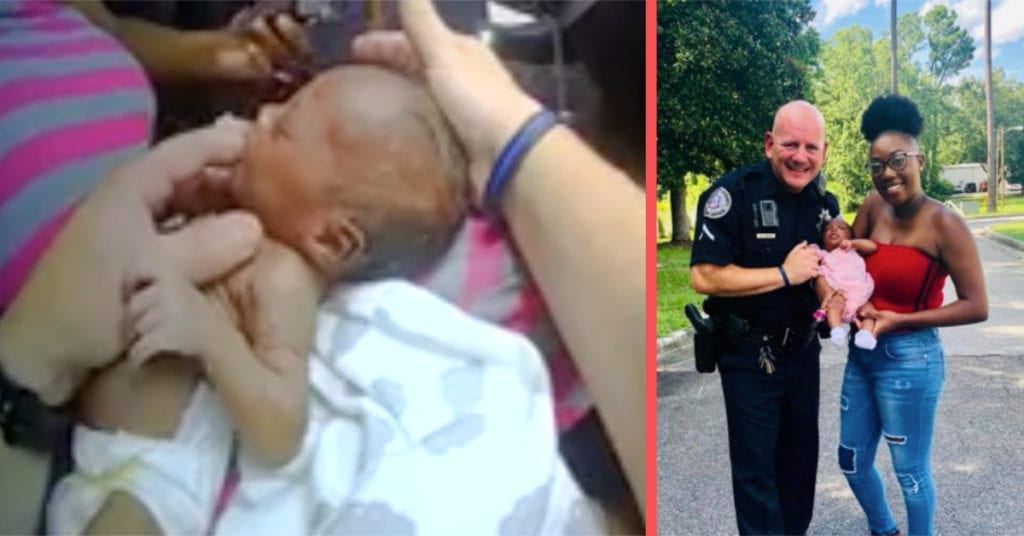 The South Carolina mom had just given birth to her baby, Ryleigh, 12 days earlier. But on that fateful day, Boyd’s daughter nearly died if not for the heroic actions of Will Kimbro.

A year later, Boyd made a heartwarming offer to the Berkeley County Sheriff’s Office deputy that would tie the two together forever.

So what happened on that scary June day a year ago?

Kimbro pulled Boyd over for speeding. Only he realized very quickly that this was more than a routine traffic stop.

The distressed mother rushed out of the car and alerted the deputy that her baby was not breathing after drinking from a bottle.

When we wear the uniform and badge, we become what someone needs at that moment. For one Deputy that meant he needed to become the line between life and death for one young child.On June 11, a Deputy was conducting routine patrol in the unincorporated Summerville area of Berkeley County when he stopped a vehicle for speeding. What happens next was all captured on his department-issued body camera.Upon stopping the vehicle, the driver immediately exited the car and exclaimed that the baby in her vehicle had stopped breathing. Deputy W. Kimbro knew he needed to act immediately to save the baby’s life. Deputy Kimbro made contact with the 12-day-old baby and her mother in the vehicle. The mother told the Deputy the baby stopped breathing after drinking a bottle. Deputy Kimbro took the baby’s limp and cyanotic body and performed lifesaving first aid. As a result, he was able to get the baby to breathe again until EMS could arrive. Because of Deputy Kimbro’s steadfast, professional and heroic response, the 12-day old baby was able to live. Please join us in congratulating Deputy Kimbro for his gallant actions that prolonged human life. He was awarded the “Life-Saving Medal” from Sheriff Lewis for his heroic actions that day. Well done!

Thankfully, Ryleigh did indeed breathe again and has been healthy ever since.

Interestingly, Kimbro and his wife, Carole, have stayed close with Boyd and her baby. The mom even attended a proclamation ceremony for her savior.

Today Officer Kimbro was presented a proclamation to honor what happened on June 11 2019. We love you Officer Will Kimbro! 💜🤞🏾

And the week after Ryleigh turned 1, Boyd ensured that the bond will never be broken.

When Kimbro and his wife came by to see the new mom, Boyd handed Kimbro and Carole scratch-off cards and a penny.

What the deputy found underneath will truly make your heart melt.

“Will you be my godfather?”

The couple immediately said yes, as Kimbro reflected on the impact of that June 11 encounter.

“[I] always asked myself, what was the reason I went down that street?

There were five, six, seven other streets I could have gone down before going down that particular road.

I could never answer that question. I just stopped trying. God works in mysterious ways.”

It just goes to show how a single moment can turn into a life-changing miracle.

Have you ever been in a life-saving situation? How did you handle the moment?

Tell us your story in the comments below!