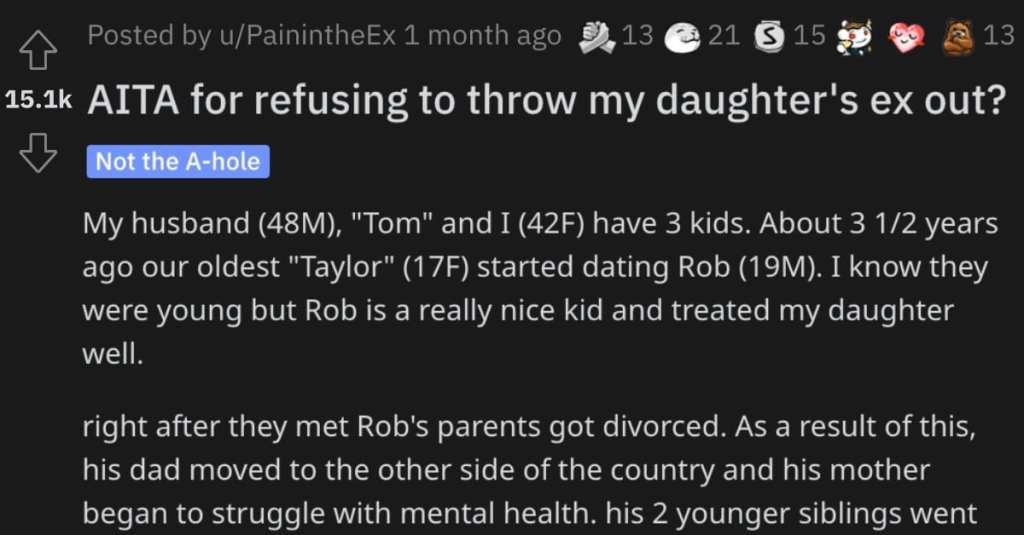 Mom Refuses to Throw Her Daughter’s Ex Out. Is She a Jerk?

Family relationships sure are complicated, don’t you think?

And we’re about to hear a story that has an unusual twist when it comes to parent-child relationships.

A mother shared a story about a sticky situation she’s now in with her daughter and her ex-boyfriend.

AITA for refusing to throw my daughter’s ex out?

right after they met Rob’s parents got divorced. As a result of this, his dad moved to the other side of the country and his mother began to struggle with mental health. his 2 younger siblings went to live with grandparents but they did not have room for Rob so he was going to go to live with his dad. He was devastated to leave his hometown, Taylor, and his friends.

Taylor and Rob asked us if Rob could move into our in-law apartment. We spoke with Taylor privately and asked if Rob was pressuring her into allowing him to move in and she said no it was her idea.

We also told her to think really hard about it because once we agreed to take him in, we would be responsible for him and that would mean he would be staying as long as he needed. She thought about it for a few days and then said it would be okay no matter what.

She is usually a level-headed kid so we thought we had made the consequences of this decision clear. We thought it over for a bit and after setting some ground rules agreed to allow him to live in the apartment.

The apartment is a fully separate unit with its own utilities and kitchen, bathroom. The unit is separate but does have hotel-style adjoining rooms set of doors. We decided not to charge Rob any rent or utilities in exchange for following a certain set of rules.

In the beginning, Rob was not allowed to have guests to the apartment, including Taylor. We did not let him set up the living space and instead they would have to use the main part of the house to hang out together. Rob was always welcome to have meals with us and we treated him like another member of our family.

Rob is now finishing up his first year of a local college and Taylor is a senior in high school. 5 months ago Taylor and Rob broke up and she starting dating “Joe” (18M) almost immediately. Since the breakup, Rob usually stays in his place and only occasionally comes over to help my husband with various household chores.

A week ago Taylor came to us and told us that Rob’s presence is making Joe uncomfortable and that we need to ask him to leave. We said no to kicking him out but we said we would set up some new rules that would make everyone more comfortable.

We said that from now on Rob would use the living space in the apartment and would have to call before coming over. Taylor said Joe is still unhappy about this and the only thing that will make him happy is for Rob to be gone.

I might be TA because I told Taylor that this was obviously between her and her boyfriend and the solution is not tossing someone out on the street.

She got even more upset with me and said I was ruining her senior year and she might end up dateless for prom if Joe breaks up with her.”

Now this sounds like a sticky situation to me…let’s see how people responded.

This reader doesn’t think the woman has done anything wrong, but they opined that maybe the kid should have more access to the common spaces in the home. 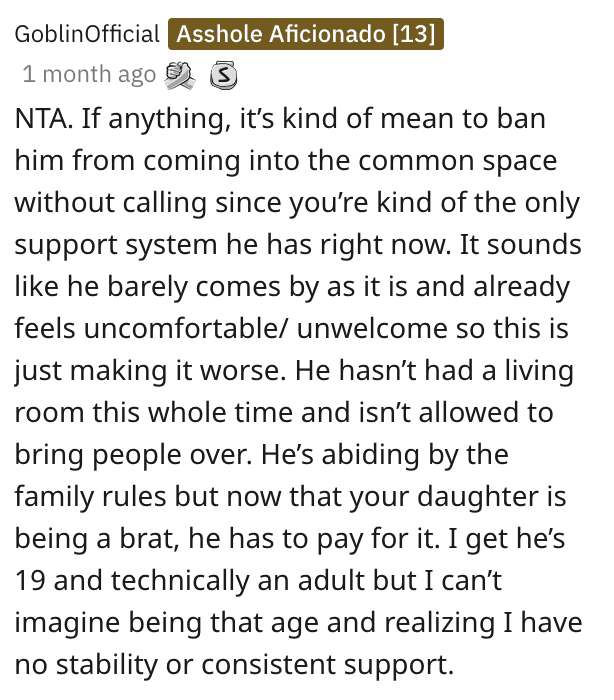 This reader said that the daughter is worked up because of her new boyfriend, not because of the living situation.

And they added that the daughter just isn’t acting rationally. 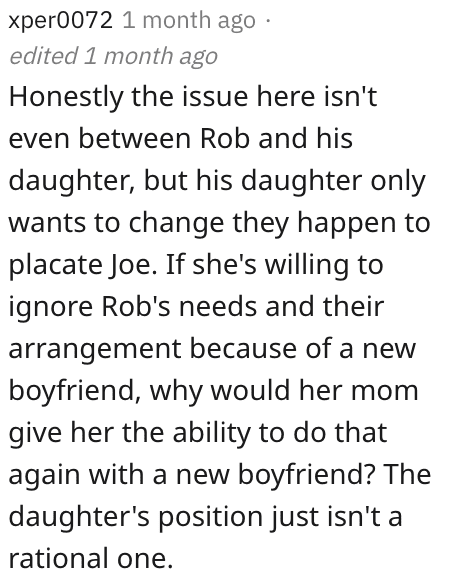 Another individual said that the family is helping this poor kid out and agreements so made. So it looks like Rob isn’t going anywhere.

Finally, this reader could relate to Rob’s situation because she went through some similar things when she was a teenager.

She has a lot of good advice for this family regarding their situation. 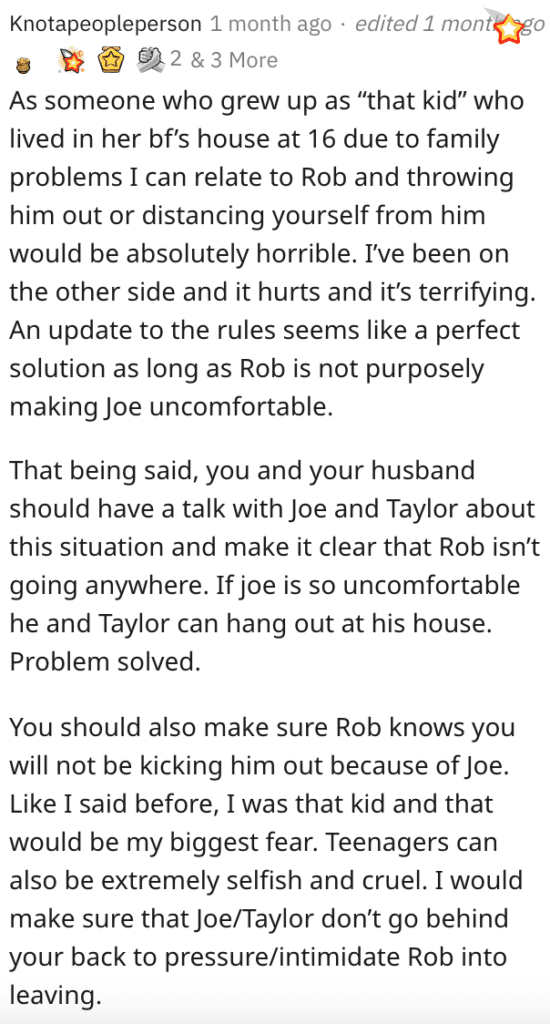 Do you think this woman is acting unreasonably?