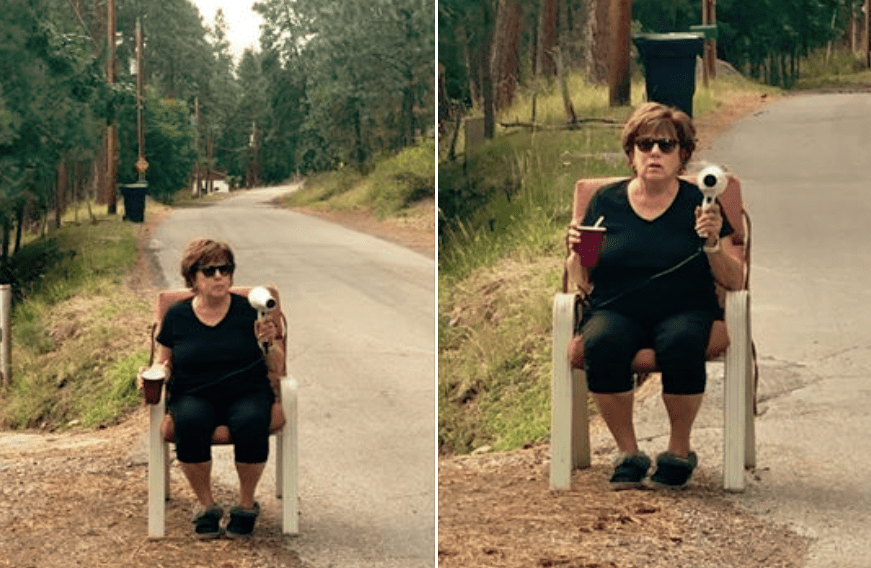 In Montana, a grandmother wanted to slow down speeders, so she grabbed her hair dryer and posted herself next to the roadway.

Patti Baumgartner was desperate to stop speeding in her neighborhood. She told KPAX,

“We were talking about maybe something would slow the cars down. So, we decided to put me in a chair and I guess use the hair dryer as a speed thing.”

Trooper Noah Pesola saw the photo of her doing her best to keep her neighborhood safe for kids and pets. He was so impressed he found Baumgartner and gave her a sticker badge and campaign hat, making her an honorary trooper.

I was able to find Ms. Patti.

She was made an honorary Trooper with a campaign hat and sticker badge for her work to keep her grandkids safe. #SlowDown#KidsCrossing#KeepOurKidsSafe https://t.co/M2EYlDQlku pic.twitter.com/eaAh4s1It2

“I thought it was hilarious. I think that we have a speed issue in Montana, and I thought it was a great creative idea for the public to try and combat that a little bit without making people too upset.”

Hard to tell if Baumgartner’s haird ryer actually deterred speeding, but she said she’d do it again the next time she wants to blowdry her point across. SLOW DOWN, people!