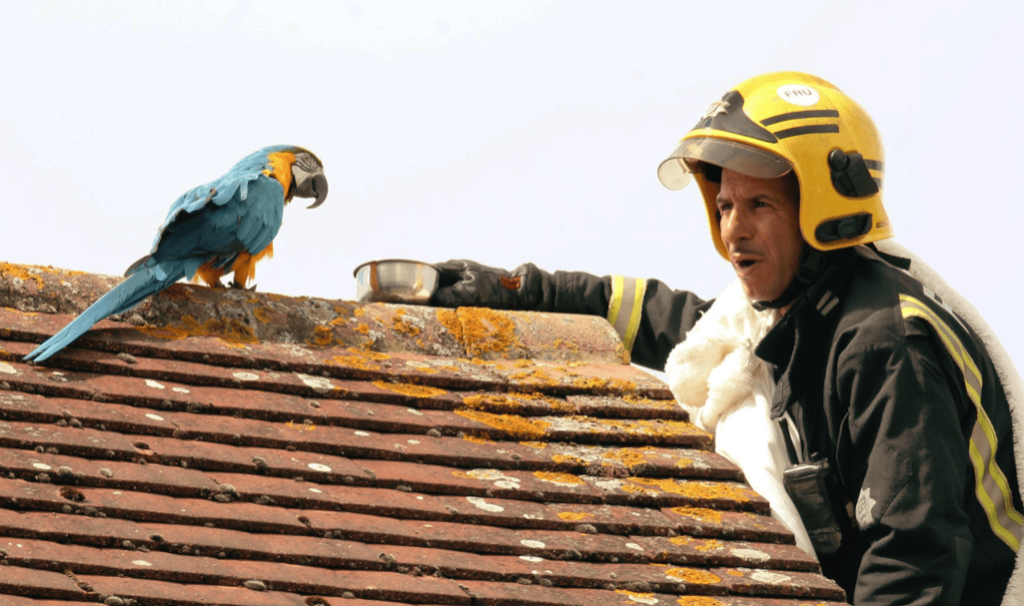 Parrot Needing Rescue from Roof Tells Firefighters to “F” Off

Firefighters perform heroics on a daily basis for grateful citizens everywhere. Some of the animals they save, on the other hand, aren’t so thankful. One macaw in London made herself a real bird-en to her rescuers.

Jessie is a macaw parrot who found herself on a roof top, unable to come down. Understandably, she was in a fowl mood.

So she took her frustrations out on the brave firefighters called to bring her down.

The colorful bird’s owner advised the brigade members to tell her, “I love you,” to help them bond with her and gain her trust.

But Jessie is a bad girl with poor manners. She literally told her rescuer to “F” off – swearing over and over again.

To be fair, she had been on the roof for three days, and her owner was concerned she’d hurt herself and was unable to come down on her own.

Jessie the parrot in now home safe & sound with her owner and she had this to say to the firefighters who came to help her in #Edmonton https://t.co/Th2nlVCq7I pic.twitter.com/3ABkzH2nHY

She definitely wasn’t interested in bonding, getting rescued or being nice. She flew off, in fact, to a neighboring roof, then to a tree. So much for being injured.

Fortunately, the bird and her owner were eventually reunited. But Jessie could’ve given the hard working brigade better tweetment.

Are we sure she’s a macaw? Sounds more like a mockingbird.