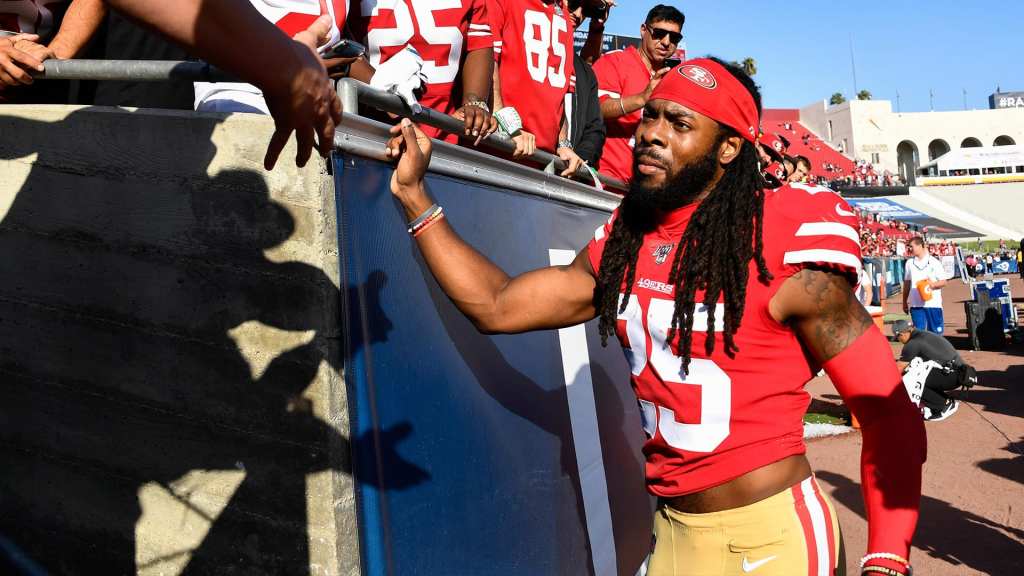 Since entering the NFL as a little-known fifth-round draft pick in 2011, Richard Sherman has developed into one of the league’s most recognizable stars. Blessed with a unique combination of length and ball skills, the San Francisco 49ers cornerback has dominated opposing receivers for nearly a decade while totaling more than $65 million in career earnings.

Despite all of his personal accomplishments, it is Sherman’s continued dedication to helping those in need that stands out the most. The former Stanford student-athlete showed why he earned the NFL Player Association’s Week 11 Community MVP Award by spending $27,000 to clear schools’ cafeteria debt.

Sherman recently gave Principal Stan Garber of Cabrillo Middle School a personal check for $7,491.27 to clear the school’s outstanding cafeteria debt. Garber followed up by posing for a photo with the local star and posting the following message on the school’s website:

“Richard’s gesture created such goodwill for the 49ers that they went on to sack Aaron Roger’s and the Green Bay Packers the next day on national TV by a score of 37-8.

Garber praised the 49ers organization for its strong charity work in the community and expressed tremendous gratification for Sherman’s selfless donation that will benefit about 60 kids.

Surprisingly, that was not even the largest contribution Sherman made to help school systems. In October, he wrote a check for more than $20,000 to the Tacoma Public Schools in Tacoma, Washington to wipe out students’ lunch debt.

Giving back is second nature for the four-time Pro Bowl selection. While establishing a reputation as one of the NFL’s most outspoken stars as a member of the Seattle Seahawks, Sherman became actively involved in charity work. Eventually, he set up two organizations: Richard Sherman Family Foundation and Blanket Coverage Foundation.

.@RSherman_25 made a $6k donation to the Sincerely Royal foundation to help w/ computers for the academic center & scholarship a less fortunate athlete in our program for training, 7v7, college visits, & mentorship! An athlete that uses his platform to change lives! Thanks fam!✊? pic.twitter.com/83hMueqtv2

Since 2013, he has raised more than $1.5 million and helped thousands of students from low-income communities by providing school supplies and clothing in order to help them be successful. Sherman’s latest charitable contribution is just another example of the powerful platform professional athletes possess.

While many of us get caught up in what happens on the field, Sherman is a testament to making a true difference off of it.