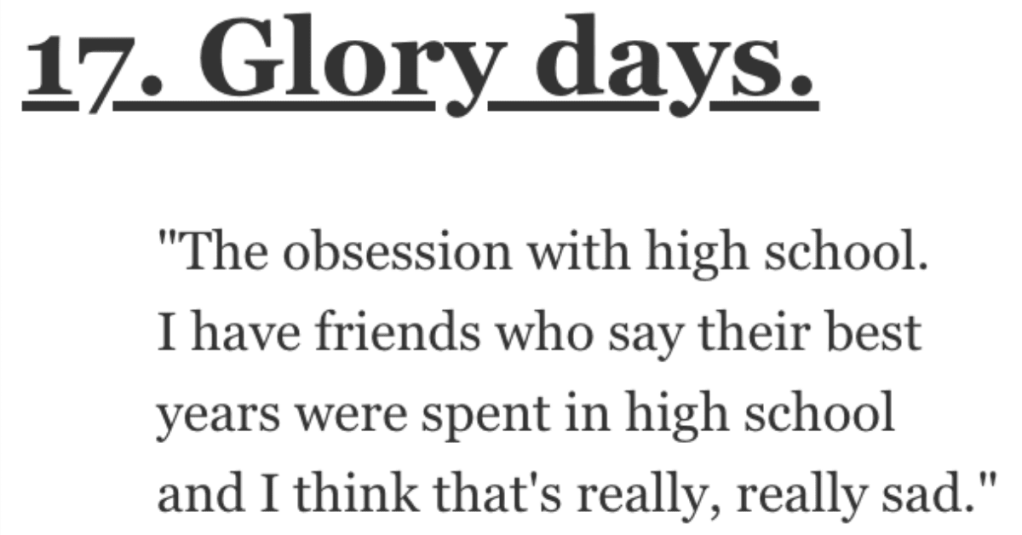 Non-Americans, What Confuses You About the USA? Here’s What People Said.

The United States is pretty much the center of the world when it comes to pop culture…and that’s a fact, Jack!

People love to watch our movies and TV shows, listen to our music, worship our sports stars, and mimic our fashion trends.

But you better believe that Non-Americans think there are some weird things about our culture, too.

What do you think is strange about America?

“After traveling around the globe, I found out many things about society. One thing is true, Americans have large portions.

But another rings true and that’s cost. Food is cheap and plentiful in the US. And many places have amazing tasting food.

I often times will have my meal at the restaurant, then the leftovers for dinner that night, and finally finish it off for lunch the following day.”

“How difficult it is to get around if you don’t have a car.

Not everywhere, but there are some places that are just impossible.

“How big some things are.

“TV is hyper commercialized to the point of being completely unwatchable.

Even the news programs report and discuss stories on Starbucks announcing their autumn drinks menu two weeks ahead of schedule.

“People have lunch on their desks. And usually it’s just a snack.

Where I come from, lunch is the most complete meal of the day.”

Mainly the bounty hunters, that’s some cowboy s**t right there.”

“How tipping is expected no matter what.

Over in the UK you tip for exceptional or good service, it’s something extra.

“That you have extremely v**lent shows on daytime TV, but you sensor nudity.

How will a b**b harm you, but st**bing and blood splashing is normal?”

“The fact that swearing is such a big deal and you bleep out everything is so weird.”

“Not getting proper holiday time.

More workers need to be in Unions. I joined one a few years ago and I can say they would never put up with that bulls**t.

If the boss tried that, we’d all go on strike and shut the whole operation down.

Once they start hemorrhaging cash, their attitude changes really quickly.”

“The extreme polarization in politics.

I’m used to having many parties, which gives more nuances. In the US it seems politics became a team sport, and you end up with the “you’re either with us or against us” mentality a lot easier.

I think that is very detrimental for the country, but I guess there’s no realistic way out of that, nor any will from either of your leading parties to do so.”

“The more credit you take the better for your credit score…

Here in Germany your credit score will suffer the more credit you take. Even if you pay it back on time.”

“Employers are always trying to get us to do as much work as humanly possible, and then do a little more.

Don’t have a desk, but my boss is always trying to get me to just eat something quick at my workplace rather than taking an actual lunch break.”

“Never listing the country name when they say a US place name, even if they’re talking to a non-American who might not know what the US states’ names are.

I remember working in Asia and colleagues tell me that always messes them up, unless it’s a famous state like California, Florida, Texas, or something like that.

Otherwise, they might not have a clue whether it’s a state or a city.”

“The doors on public bathrooms have a gap on each side. So not completely private.

I find that weird.”

“The obsession with high school.

I have friends who say their best years were spent in high school and I think that’s really, really sad.”

“Being afraid to go to hospital because of the bill. I am a type one diabetic and as a young teen I OD’d on insulin because I wasnt well.

I was in intensive care for a week and general ward for 3. I cant imagine my parents being scared about paying for that.”

“Parents demanding rent or any money from their kids who keep living at home after age 18.

In my country adult kids who live at home will spontaneously contribute to the extent that they can, but most parents will do A LOT to avoid accepting those contributions: allowing your kid to focus on studies/their early career and saving is a point of pride.

“You need to earn it!!!” Does not apply to (reasonable) parental support.”

“All the things you can do at younger ages than you can have a drink.

You can get into life-long debt with a mortgage or university fees, you can drive a car, you can buy a f**king g**, you can have kids, you can join the army and k**l people, you can get married.

But at the wedding, even having done all of the above, when the father of the bride makes his speech and ends with a toast you’re sat at the kids table raising a glass of orange juice because you’re not allowed champagne!

Also you can’t just drink a few warm-up beers as you walk to a night out, enjoy a few cold ones on the beach or in a park on a hot day. For a country that prides itself on its freedom you guys sure are touchy about casual drinking.”

“I think the fact that you have to use a car to get anywhere and the fact that most people have a car so you don’t need to build things close together has looped you into a vicious cycle.”

“The amount of sugar that Americans consume.

My cousins live in USA, and it makes my nauseous when I see how they drink coffee (4,5 teaspoons of sugar. We drink 3,4,5 cups of coffee a day, so do the math ).”

Frankly I would be wary of anyone who organizes or enters a child in one of those things.”

“I’m from Northern Europe, where everyone is very distant to strangers.

Since I live in the US, I’ve gotten used to chatting with everyone on the street, getting random compliments on my hair or outfit, etc. It is SO NICE.

In Europe we often describe this behavior as ‘fake’, but how about just being nice and lighten up someone’s day at no expense?

“I’m a Russian who has been living in America for many years.

I could go on and on about the things I had found odd here — the level of respect for laws and rules, tolerance for people who are different, believing and trusting the authorities by default, acting friendly to complete strangers, leaving things unlocked and unwatched, food which looked appetizing but tasted utterly flavorless, drinking water available from any random faucet, eating out at restaurants every day, ice in everything…

But the one weirdest thing for me was the number of dysfunctional families. It seemed almost expected for children to rebel against parents. For parents to not know what the children were doing. For families to spend a whole day without talking together.

For grandparents to be removed out of sight to a retirement home. For mocking relatives behind their back. For divorces over trivial things. For Thanksgiving dinners, the one(!!!) time per a year when the whole extended family gathers around a table, to be awkward and unwelcome events.

I think it has to do with how easy life is in America: without a viciously hostile environment that would crush those who are alone, there is no pressure forcing family members to learn how to live and work together.

What confuses YOU about America?