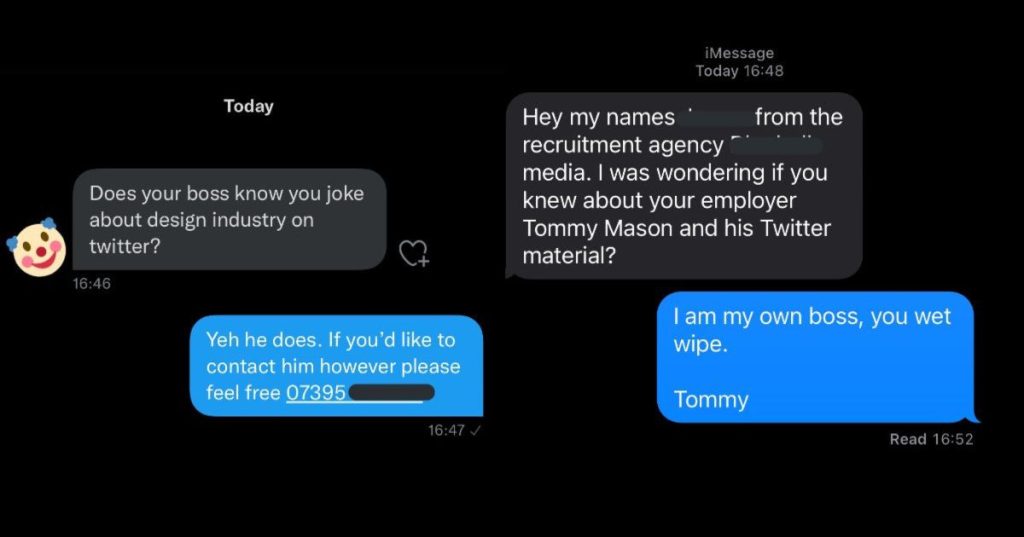 One Man’s Legendary Takedown Of A Meddling Job Recruiter

Anyone searching for a job these day is probably at least a little bit worried about their social media accounts. Those are personal, of course, and reflect personal views, but that doesn’t stop potential employers from snooping – and maybe denying people jobs – because of what they find.

This person ran across a job recruiter who was doing just that (even though he wasn’t applying for a job). And not only was he going to not going to hire OP (not that he was asking), he was going to snitch to his current boss, as well.

Me every-time I find a nice font I want to use ? pic.twitter.com/lxW3W3LIIw

The man didn’t like the fact that OP was posting memes on Twitter joking about his job. The horror!

My social media strategy to grow your following

1. Rip the piss out of a recruiter
2. Post a shark mixed with a horse
3. Repeat

The fact that he’s responsible for his own brand will be important later.

Part of that brand is using social media to critique the design community that he is a part of, and the people who follow him expect him to have no filter.

Somehow, a job recruiter managed to not only see Tommy’s tweets, but to take offense at them, as well.

“Does your boss know you joke about design industry on Twitter?”

Tommy decided to have a little fun with the guy (who was being a jerk), and replied in earnest.

He shared his “boss’s” phone number and watched, probably a bit floored, as the man actually texted to tattle.

“I was wondering if you knew about your employer Tommy Mason and his Twitter material?”

Here’s the thing: Tommy is a freelancer, which means he’s his own boss and therefore received the text himself.

Everyone pretty much loved Tommy’s handling of the situation, though some wished he wouldn’t have protected the identity of the recruiter in the first place.

I hope this guy has learned a lesson that most of us learned in elementary school, which is that no one likes a snitch.