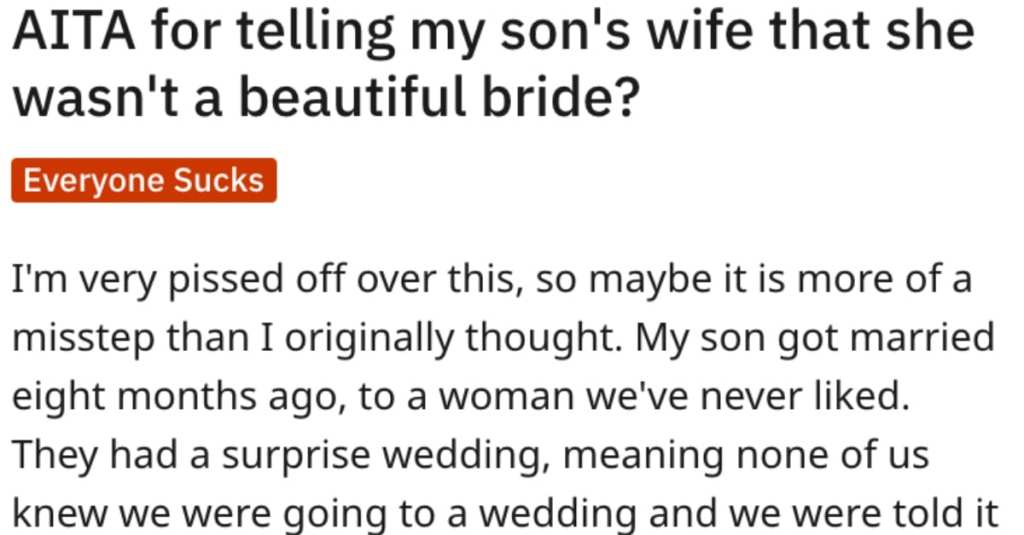 Parent Wants to Know if They Made a Mistake by Telling Their Son’s Wife She Wasn’t a Beautiful Bride. People Weighed In.

I’m sure you already know how fragile women can be on their wedding day.

And the LAST thing you probably want to do is tell them that they don’t look absolutely stunning in their dress on their big day.

But that’s what happened with this man and they shared his story on Reddit’s “Am I the *sshole” page to get some feedback about what went down.

AITA for telling my son’s wife that she wasn’t a beautiful bride?

“I’m very p*ssed off over this, so maybe it is more of a misstep than I originally thought. My son got married eight months ago, to a woman we’ve never liked.

They had a surprise wedding, meaning none of us knew we were going to a wedding and we were told it was just a cocktail party. My wife wore white, now that I think of it my wife wears a lot of white and that makes DIL even more of a dumb*ss for never warning us.

Well for eight months she has been trying to spin it to make my wife look like some crazed MIL who showed up in a wedding dress. She had a wedding picture on social media and when someone commented who wore white, she wrote back “that’s my mother in law, she doesn’t like me” and a laughing emoji.

My wife called her out on it and she played the victim and whined about my wife trying to upstage her. She has made a couple snide comments, and told people who weren’t at the wedding that it was intentional.

My son knew how much this was p*ssing me off, and pulled me aside. He said that she is insecure because when she showed the wedding pictures to her best friend, who couldn’t make it, the friend immediately commented that my wife is gorgeous.

I guess her mom said something too. My wife used to model and not to be an *ss, but she draws your eye much more than DIL. He said that she is insecure, and she has always felt insecure around my wife. Also we are hispanic and she is white, and I guess her own mom was telling her she should tan and she was going to look pasty compared to everyone.

I don’t really care. I have a 15 year old daughter, so i certainly get that woman struggle with body issues, but you don’t get to take that out on someone else and spread lies.

She made another comment recently, about the picture being proof that she is the innocent one in the relationship, and I snapped at her that I am sick of hearing about the white dress, and that maybe if she put more effort into her own appearance she would have been a beautiful bride and people wouldn’t be looking at her MIL.

She stormed off and my son is mad. He actually said his mom has great self esteem (she doesn’t) so we should take the high road.”

This reader made it pretty clear: this guy is an *sshole.

Another person remarked that the father was also wrong for his actions. 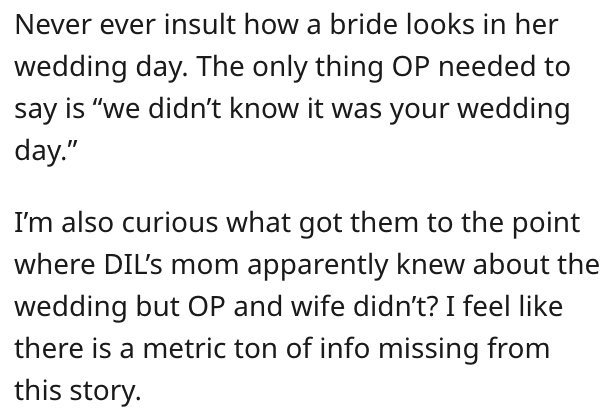 This individual believes that the dad is definitely in the wrong here and that he was cruel on purpose.

This person thinks everyone involved in the story is pretty bad…and that they’re all kind of *ssholes. 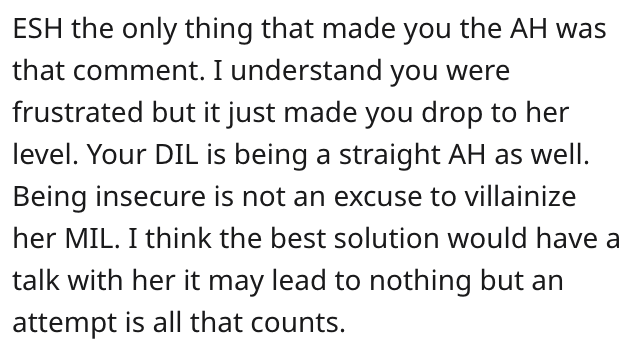 Finally, this reader made a good point: you should always take the high road and not resort to insults. 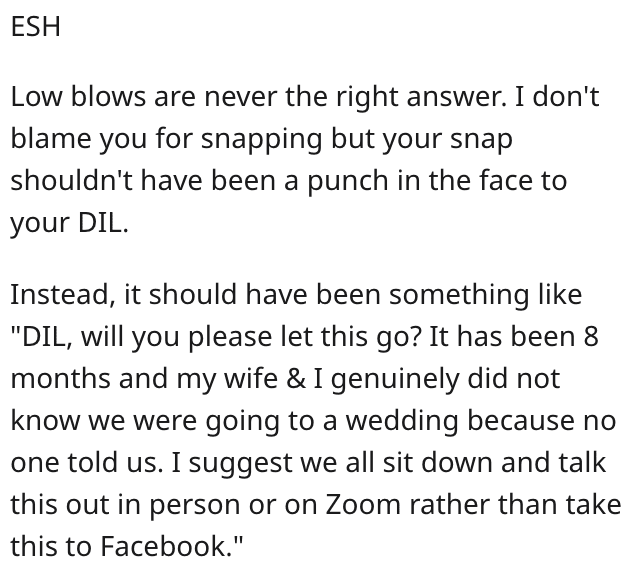 Tell us what you think about this situation in the comments.