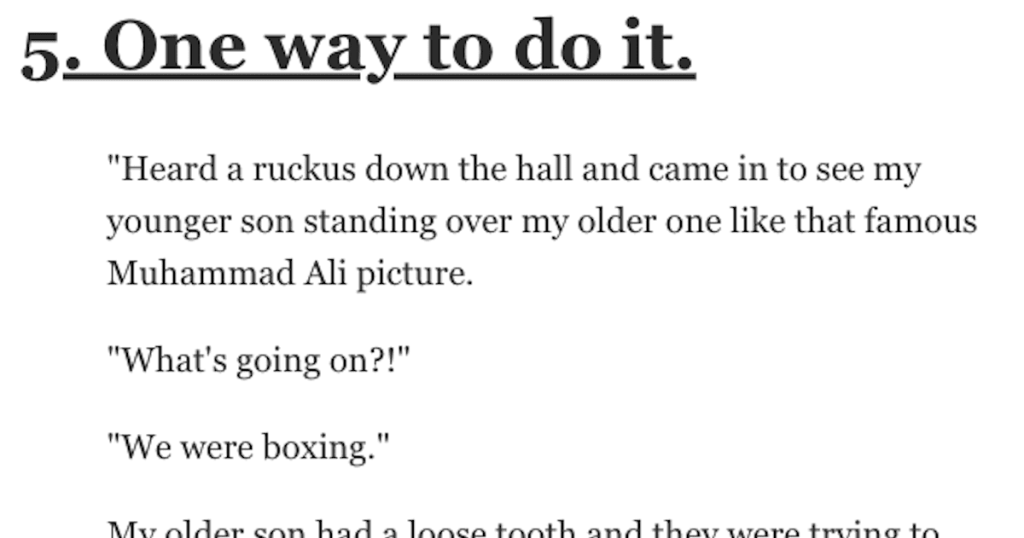 Parenting is funny: on one hand, you’re always trying to set a good example for your kids, and on the other hand, you sometimes get secretly impressed when they do things that you know are wrong…but are also pretty impressive.

You know you do it!

Hey, all parents do!

Let’s check out some funny stories from parents on AskReddit.

“My ex wife decided that my son (15) is no longer allowed to date this year, despite the fact that it was never a problem before.

This coincided with him starting to date a girl down the street who’s parents hate my ex wife, though she claims that had nothing to do with it. She claims it is to ensure he gets good grades, though he has yet to have a problem in that area as a A/B student.

Instead of sneaking out and around, or getting mad, he went directly to the gir’ls father and offered to work for him in his shop (guy runs a machine shop on his property), cleaning up, sweeping floors, organizing. So he got his first part time job, which his mother was ok with, and in turn gets 3 nights a week where he is “working” where he gets paid to go out with the daughter.

It was sneaky and underhanded, and perfectly orchestrated between my son and this guys daughter and I am extremely proud of him.”

“When my kid was 8, we were having some “behavioral problems” with her to put it mildly. Went to a therapist who talked to each of us individually, and figured out the root of the problems.

She was playing us off of each other. Despite being only 8, she had our number, and was – unintentionally for the most part – winding her mother and I up over some minor thing, then watching with glee as we fought over what she wanted us to fight over.

The therapist suggested we try an experiment. The next time we caught ourselves being manipulated, we were supposed to lock ourselves in the bedroom and refuse to engage with our little hellion.

Her reaction was at once disturbing and enlightening. She tried to bash down the door to the bedroom. Starting with the vacuum cleaner, and when that didn’t work she went to the kitchen, got the pizza cutter out of the drawer, and tried to saw her way into our bedroom in order to keep the fight going.”

“For Christmas one year my then 18-month-old nephew got a set of trucks.

His 6-month-old cousin got her hands on one and was playing contentedly. Nephew noticed, stood over her for a moment and very deliberately dropped a different toy a few inches from Niece, who dropped the truck to pick up the new toy.

Nephew snatched up the truck and scurried away. Niece realized she’d just lost a toy and gave him a sad look. Nephew hesitated, slowly walked back towards her holding out the truck… and grabbed the new toy out of her hands and ran off with both toys.

He’s not great at sharing, but the boy does strategize quite well.”

“In 5th grade, my kid’s teacher would let the students retake any quiz if they got lower than a certain grade. But she gave the same quiz.

My kid was deliberately tanking the first quiz, finding out what the answers were, and scoring 100 on the retake.”

“Heard a ruckus down the hall and came in to see my younger son standing over my older one like that famous Muhammad Ali picture.

My older son had a loose tooth and they were trying to
knock it out. Older son gets up, tooth is on the ground.

High fives all around.

Turns out the tooth he knocked out wasn’t the loose one they were after, but a different one. Oh well.”

“Malicious compliance and finding every loophole to a rule (and now he’s a lawyer).

Book report? He’ll do it on a 1st grade book (in 6th grade) and analyze the living sh*t out of it. Can only get up to sharpen pencils? He saved his pencils from every other class to sharpen like 10 pencils a day in her class and take the most circuitous route to the sharpener.

New rule you have to walk straight to the sharpener and back? Didn’t say you couldn’t walk at 1/2 mph and sharpen in slo-mo.”

He’s always really sneaky about reading after “lights out” and although I have to foil his plans and tell him to go to bed, part of me is proud of him for liking reading that much.”

“I told my 7 year old she could pick out some candy at the gas station. She came up with 2 small Kit Kat bars and I said “no, you can have ONE”.

I watched her go put those back and grab the king sized one instead. Well played, kid.”

“This actually just happened last night. My six year old daughter had youtube taken off her tablet after I caught her watching a ” Live at home birth” .

She is allowed one hour a night on her tablet. She came into my bedroom around three am… Her: Mom , how do you spell Taylor Swift Me: ” Why are you out of bed and what are you doing?” Her: I couldn’t sleep , so I pushed the kitchen chair up to the fridge and grabbed my tablet , I downloaded youtube back on again and I wanted to watch a music video.

I wanted to be angry but this took a lot of follow through at 3am.”

“My older two were playing on the trampoline with the kids from next door. I was playing nearby with my youngest son and was keeping an eye on the kids.

No idea where he pulled that one from. He’s my only kid that appears to have a potty mouth and we don’t even curse in the house. I thought it was pretty funny, but had to correct him while trying not to laugh.”

“At my kids’ school, they have a process to recognize achievements that the children make outside of school.

So, the kid does something good – maybe gets a ballet certificate, or wins a trophy in a sporting club – and they take evidence of this to the Head of the Junior School. The Head listens to their story, gives them big kudos, and the achievement is written up on a board, with all the others.

My daughter is clearly thinking it’s been too long since she’s been able to get this kind of attention, so she looks around herself to see what she can turn into an achievement.

She finds a “#1 dancer” medal, given to her at her recent birthday party. She is a terrible dancer. Nevertheless, she takes the medal to the Head, who does the whole “congratulations” routine, and writes up the “achievement” on the board. She tells us none of this.

One day, I’m walking past the board. I usually give it a quick scan to see if there’s anything interesting on it. Well, unexpectedly seeing my child’s name along with “Awarded #1 Dancer Medal” certainly fell into that category.

I had a word with her about it. I told her that I was very proud of her for her problem-solving, but that if she did it again, I would make her go to the Head and explain the ruse.”

“My three year old wanted to take a bath the other day.

But my wife told him no, it’s not bath time.

So he asks for juice and my wife gets him juice.

When she comes back he has rubbed mud in our 1 year olds hair, just covered.

Okay, moms and dads, now we want to hear from you.

In the comments, tell us about times when your kids did something wrong…but it still impressed you…