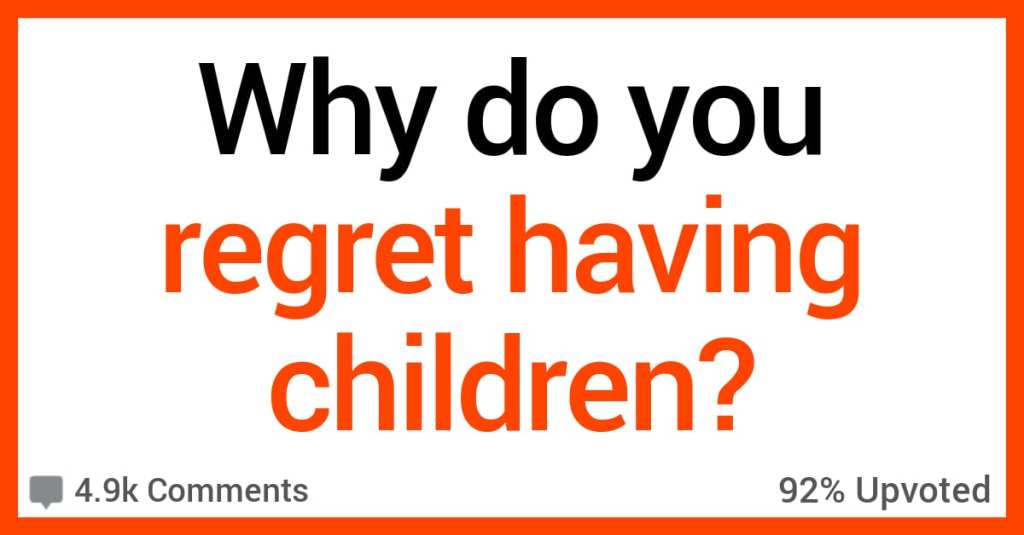 I’ve sometimes wondered if there are some parents out there who regret having children.

Well, now I have my answer: yes, some of them do feel that way.

Which is kind of surprising, but I guess there are bound to be some moms and dads out there that aren’t exactly thrilled with having kids…

People who regret having kids opened up on AskReddit. Let’s see what they had to say.

“I have two kids and they’re an endless series of PTSD triggers.

If I had known the extent and nature of my mental health situation I would have never had children.

“I love my kid more than anything, she’s the light of my life and my delight, but:

(1) Life is just easier when you don’t have a kid. You have more freedom, more options, fewer responsibilities, and so much time. You can take risks, jump on opportunities, do stuff, that just is so much more difficult if you have parental responsibilities.

I’m not talking about partying or living irresponsibly. I mean things like being able to take a job doing humanitarian work in Africa without having to worry about the safety of your family.

(2) In the world as it is, with so much uncertainty and such a bleak outlook, I worry about her future.

I am very much aware of the downsides and I think people who choose not to have children are probably making a wise choice in current circumstances.”

“I don’t regret my daughter; she’s a smart, healthy and beautiful little girl, we could not be more blessed with her.

What I regret is motherhood. I’m not an eager mother, I don’t enjoy the mundane grind of school pickups, park visits, watching Frozen 6,000 times, drawing stick figures, etc. I get no joy from it.

I’m a good mom, I’m attentive and ever present, I do ALL the things and am extremely responsible, but I’m running on a constant state of “over it” and that poor little girl deserves so much better.”

“I caved when my wife got baby fever entirely too soon after our first.

My oldest son had just been diagnosed with autism and I just kind of thought that everyone with very young children were miserable until they were 4 or 5 years old. I repeatedly told her that not at all ready to have another child but gave in. We weren’t doing well financially or personally but I just wanted to make her happy.

She asked for a divorce soon after our youngest turned 1. It’s becoming more and more obvious just how self-centered and selfish my ex-wife has always been.

I’m trying not to be bitter but I hate a lot of being a single dad of two young children without any help. I eat what I’d like to say often because I realize it wouldn’t be productive. I grew up with parents who had a terrible divorce and I’m trying to make sure my kids don’t live the same fate.

I’m lonely and terribly depressed, it feels like my life consists entirely of working and being a dad. It feels like no one will ever love me again and everything about dating sucks.

I don’t blame my children. I love them more than they might ever know. My life would be infinitely easier without kids but I hope they’ll never know how I feel.”

“I regret what I unknowingly passed on to them.

If I would’ve have known the severity of the mental illness that exists in my bloodline, I would’ve never have had kids. Being moderately mentally ill myself (Depression/Anxiety), I never thought that mine was severe enough to go on to affect my children in different ways/severities, that it did.

However, I found out 10 years into a fight between life and death with my then 15 year old son, mental illness is sadly very real in the family and my family kept it from me. They sat silent while my son suffered since 5 years old with voices, suicidal attempts, cutting (all before he turned 9!).

I feel guilty everyday I brought children into world never really knowing they would go on to suffer from mild symptoms to very severe. My son could’ve been helped many years before he finally was had I known earlier, but thanks to my family, I almost lost him 4 times before his 16th birthday.”

“My son has autism and I sometimes regret having him.

I still love him to death but when I see that he’s not like other kids and doesn’t really socially interact, it breaks my heart. I worry for his future and what would happen when my husband and I die.

Will he be independent and takes care of himself? I worry a lot.”

“When I had my kids I was stable and when I got my divorce, my ex wife never wanted to work still and still does not work.

To this day I send all my money to them (while still paying my bills and surviving of course) just so they can eat, go to school with everything they need, and be able to have a good child hood.

I just wish I waited to have them with a better woman.”

“Because they deserve more than I can give them.

Financially, emotionally, and mentally I am just not equipped to have children. Most days, my kids are more functional than I am. My kids are 21, 14, and 11. I’ve been a single parent for most of their lives.

I love them and they are my motivation to better myself. But it’s hard when you live in the USA and have to choose between rent/food and buying medication.”

All the time running around, shouting, doing stuff they’re not supposed to do, making loud noises on tv’s or other devices. “Daddy I wanna do this, daddy I wanna do that, daddy I wanna buy this, cry cry cry I fell off the couch after you told me hundred times not to jump off couches, no daddy I don’t want to take a bath I will physically resist, daddy are you tired man f*ck that I wanna play football.”

Almost every time my daughter is with me I get a burn out, I lose the feeling in my legs and it takes a lot of effort to rise up from my couch or bed.”

“I was lied to about birth control and forced to be a parent against my will.

It ruined my life, the kid’s life, and the life of the other person.

This should not happen to anyone.”

“Due to how hard parenting is, I’m almost certain I will never do this again. So… my son will be an only child. This also brings me guilt because I’d like to give him someone to grow up with.

If you’re on the fence about having a baby, don’t. If you aren’t ready to give up your freedom and sacrifice your life to raise another one, don’t have baby. People take being a mother/father too lightly.

You will never be the same. Your life will be changed forever and will not be just yours anymore. Think hard before you commit… because once you’re in, you can never, ever get out.”

Do you regret having children?

Or maybe you regret NOT having children?

Tell us your stories in the comments!