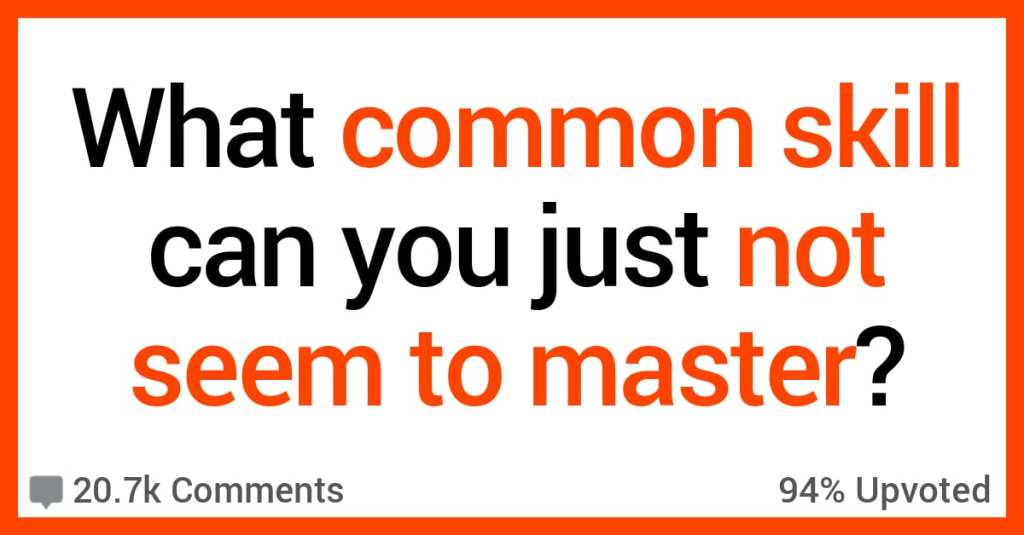 People Admit the Common Skills That They Just Can’t Master

I’m talking about all kinds of things that other people seem to pick up easily that you just can’t get the hang of.

You have some of these things in your life, right?

AskReddit users went on the record and shared the common skills they can’t seem to master.

I’m fine with people I already know, or have lots in common with, can talk for 10 hours a day about nothing. But when it comes to strangers…

What the hell is going on? Why are you talking to me, what do you want? Please just be direct.

“Winning an argument with my husband.

The more worked up I get, the calmer he gets, it’s pretty maddening.”

I can look someone in the eyes, while they’re arm’s length from me, and not hear what they’re saying because there’s a loud noise 100 feet away that my brain latches onto.

I frequently have to ask people to repeat themselves at work, where there’s a few continuous background noises, and while I can distinguish those noises from each other, I can’t f*cking hear people.

I know it’s not a physical issue, because I’ve been cleaning my ears out several times a week just to make sure.”

Me: “Maybe I was thinking of your other son. ”

Them: “My other child is a daughter. ”

Me: ” Nevermind, you must have just been standing next to another kid or something. ”

“Knowing my left from my right.

Or simple math. I can visualize big things, but the simple things elude me.”

I’m not shy, not anxious or anything like that but my parents never told me that eyecontact is normal and only in my teenage years did I discover that eye contact is normal.

I always look a mess no matter how hard I try compared to literally every other girl I know.”

“I can’t use scissors.

The majority of the time I can’t get scissors to cut bags and paper smoothly. I have to call my wife in so that she can cut it for me while making endless mockeries of me.

She says it has something to do with the part of the blade I’m using to make contact with the surface of what I’m trying to cut. Been trying to improve the last 3 years we’ve been married and I’m not better.”

9. Please stay off the road.

I wanted to believe I could learn, and everyone tried to tell me it was so easy but I’m really losing hope. I just don’t think I’m capable. Even my driving instructor is sick of me. She was so nice before, now she just yells at me and thinks I’m not trying when I am.

I can’t focus, my mind constantly wanders and I have little slips in attention all the time no matter how much I try to just focus on driving, sometimes only being snapped out of it when someone yells at me or something dangerous is about to happen (like almost drifting into a semi in the other lane…..) I constantly miss things.

I can’t remember road rules or recall them the moment I need them, my reaction time is slow and by the time someone else would already be reacting I’m noticing the thing to react to and haven’t acted yet… I’ve been compared to a drunk driver. Honestly the drunk driver probably drives better than me.

There’s so much input at once and you’re supposed to just take it all in and act accordingly but I can’t even begin to process any of it, and certainly not as quickly as I need to in a driving environment so I just shut down, and then panic because I have no idea what to do. This is especially common at intersections.

I need time to analyze the situation and think through things carefully before deciding on a course of action but quite frankly when driving that time is not there, I can’t just sit there and think it through before every action.

So I get to an intersection and while I’m trying to figure out what to do I get yelled at because of course I haven’t figured it out fast enough and I’m expected to do something NOW NOW NOW.

There’s way too much to focus on and it’s overwhelming… There also is no consistency in driving, the driving environment is always changing which stresses me and confuses me immensely. You’re constantly having to adapt to something new.

My spacial awareness is atrocious and I have no idea where the car is in relation to other objects or if I’m centered in my lane. The view out the mirrors doesn’t really help me fully “get” what’s actually going on behind me. Even though I can see where a car is behind me in the mirror, I can’t actually conceptualize where the car is on the road unless I turn my head and look back.

Speaking of which, shoulder checks are scary, I hate taking my eyes off of what’s in front of the vehicle. Apparently when I shoulder check I turn my whole body, but sure how to stop doing that. When I try to park on the side of the road I end up several feet from the curb.

It messes me up even more that you’re not centered in a vehicle—if the drivers seat + steering was centered in the vehicle like a bicycle or an atv it would be so much easier and less confusing, but no, we get this far left side bullsh*t that screws everything up. Who the f*ck designed vehicles that way? Whyyyyyyyyyy????

The concept of “scanning” is too vague. Where do I put my eyes? How long do you look in each spot? Do you just keep looking randomly around and hope you’re watching the right things? Is there a specific method for where you move your eyes and is it the same each time or does it change depending on environment? How long do you keep your gaze on one spot?

Are you really supposed to trust your peripherals that much? Half the time I don’t even notice if something is at the edge of my vision, the focus stays on what’s in front of me. How does anyone keep sustained attention for an entire drive without zoning out anyway? How does every drive not exhaust people to the point where you feel burnt out the rest of the day for the effort?

How do you just ignore the fact that one little mistake could kill you, or someone else? And how could you not be expected to make mistakes when learning something new? People when I ask are just like “don’t crash” yeah, thanks, you think anyone ever does it on purpose?

It’s bizzare that we just people who are just learning in the middle of traffic and expect them to “just learn” and that nobody will ever make deadly mistakes. Driving accidents are among the top causes of death in the Western world, driving is extremely dangerous no matter how you look at it. People will say “oh but you can’t worry about the inevitable.” It’s not unpreventable or unpredictable.

If I don’t drive I won’t get in a car crash. But you say: “well if you’re in someone else’s car you could still be in an accident as a passenger.” Yes. But considering the above, it’s much more likely to happen if I drive.

And yet, some part of me still longs to learn because getting rides all the time f*cking sucks and I just want the normal ability to drive like everyone else… ? FML.”

I’m a reasonably skilled cook. I know my way around a kitchen and I cook almost all of the meals for my house.

But for some reason I am incapable of making simple boxed Mac & Cheese that’s anything remotely palatable. I follow the instructions on the box and it comes out runny and soupy. I eyeball the ingredients and it’s just a mushy paste.

I’ve narrowed the point of failure down to the mixing of the Butter/Milk/Cheese Powder so at this point if that’s what I’m making then I just boil the noodles and call my S/O in to do the final steps by working whatever Alchemical affront to the natural order she uses to make it work.

Then I add pepper…”

Are there some common skills that you can’t seem to figure out?

If so, please share with us in the comments.