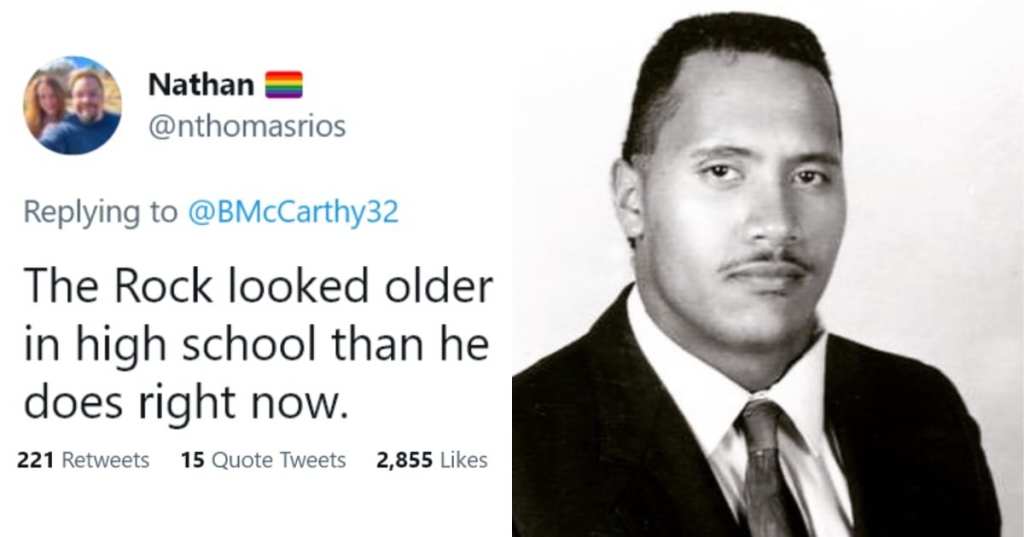 Ok, so, hear me out: everybody is ageing differently than they used to.

I mean, we’re all still ageing. And we used to be too. That’s why we are now. Because the past brought us here, which is later than then. But NOW we’re noticing that then, the folks who’d had more then than some of us did, they were SHOWING all the then to now on their faces more than the we-us of now are. You know what I mean?

Ok, probably not. Let’s let Twitter step in and explain all of this a little better. Please take note of our evidentiary exhibits below.

Brandon McCarthy is onto something, even though he doubts himself here.

this is nonsense but did people in the past look older when they were younger?

I mean, it’s not that he looks bad, but 24?! This man CLEARLY has a reverse mortgage.

Somebody get him in here, I have questions that need answered.

The Rock looked older in high school than he does right now. pic.twitter.com/QS2yM7z4gH

7. Everybody knows your name

George Wendt was THIRTY THREE in the first season of Cheers. John Ratzenberger was 34! pic.twitter.com/s239yApKOl

Things are different when you’re flying that high in the sky.

Larry Bird (pictured age 25-30 probably) looked like he ran his own plumbing business for 30 years and played basketball at the local gym in the evenings to stay young and active pic.twitter.com/LqAadr4NjP

Ooooh, so THAT’s the secret!

Pick up ANY of them you can find, it’s ABSOLUTELY true.

Absolutely. Look at any high school yearbook from the ‘50s. The seniors look like they have a middle management position, two kids, and a mortgage.

He looks like he has a grandson who’s a senior in high school.

Well, that would explain…me…I guess.

Cigarettes and cheap booze aged a lot of young people back then.

1. And then there’s Maude

No doubt. For instance. I’m 44, the same age (give or take a year) as the t.v. character Maude when the series started. I do NOT look like her, even on my very worst day. This was a bad day. (My 29-year-old cat was a few hours from dying.) pic.twitter.com/Hv1aMfhbrP

Alright, well, after that cat revelation I have a whole new rabbit hole to dive down.

What do you make of all this?

Tell us your analysis in the comments.