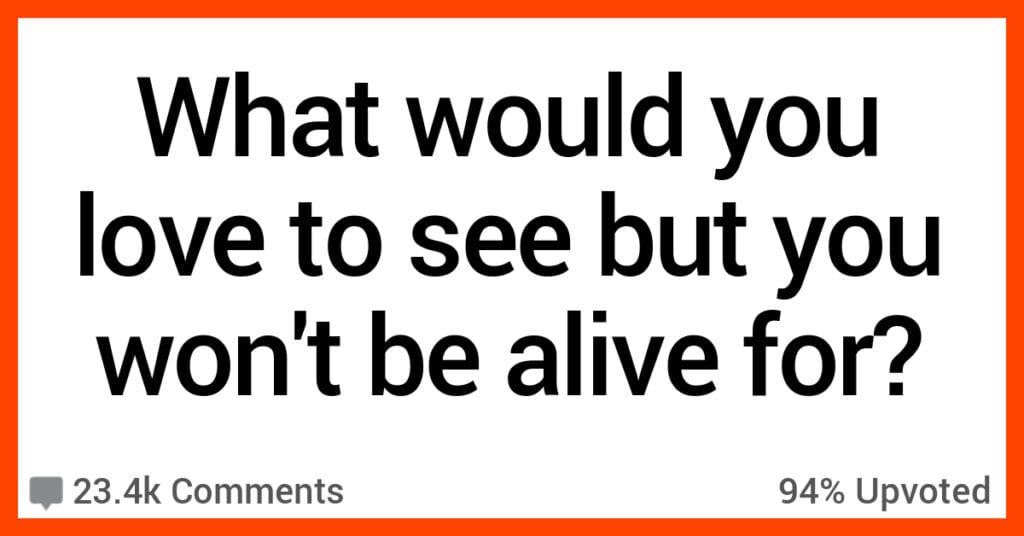 It’s pretty exciting to think about what’s next in terms of technology and medical advancements.

Will people live to be 150? Will humans colonize Mars? Are there going to be cars that are truly self-driving?

It’s fun to think about, even though we most likely won’t be around for any of it.

AskReddit users talked about what they’d like to see but they don’t think they’ll be alive for.

Projected next viewing in 4380.

“Autoimmune diseases (among other things) being eradicated once the gut microbiome is better understood.”

“George RR Martin finishing the “A Song of Ice and Fire” series.”

5. That would be awesome.

“Human teleportation as the standard means of travel.”

Maybe I’ll get to be a tourist and see earth from above, but I won’t ever get to just travel through space.”

I know it’s supposed to happen in the next 10-15 years but that’s ridiculous.

To have a fully functioning base on Mars will take at least 100 years, probably more, and some people will grow up with that being normal.”

“Travel that is faster than light.

At the moment it’s impossible but previously unbreakable laws of physics have already been broken several times in the last 200 years.

We will find a way to do it eventually because we want to. Might take a thousand years of more but we will do it.”

I mean cybernetics, bioforming, altering your body into whatever shape you wish it to be.

The gender changing procedures we have today are low hanging fruit.”

“All the countries of the world realizing that literally every country – has-been and will-be – was built on the decimation and displacement of whoever was there before them.

And we all need to put our collective baggage down and figure out what’s best for us all as a global community.”

I have a feeling it’s coming this century. I’d love to be transplanted in a lab-grown body after this one stops being useful.

I don’t know how many times I’d do it though.”

“I wanted to live thousands of years.

To see what we would become, to the stars. To see if we were worthy. To join the galactic civilizations.

I love the futurist Sci-fi novels about wormholes and infinite minds and bodies.

I wish to see what is possible, then be surprised by what is even more possible.

I may live to see Mars colonized or I may not.

Here’s hoping that humanity doesn’t implode on itself in the next twenty years.”

In the comments, tell us what you’d like to see but you won’t be alive for.

We can’t wait to see what you come up with!