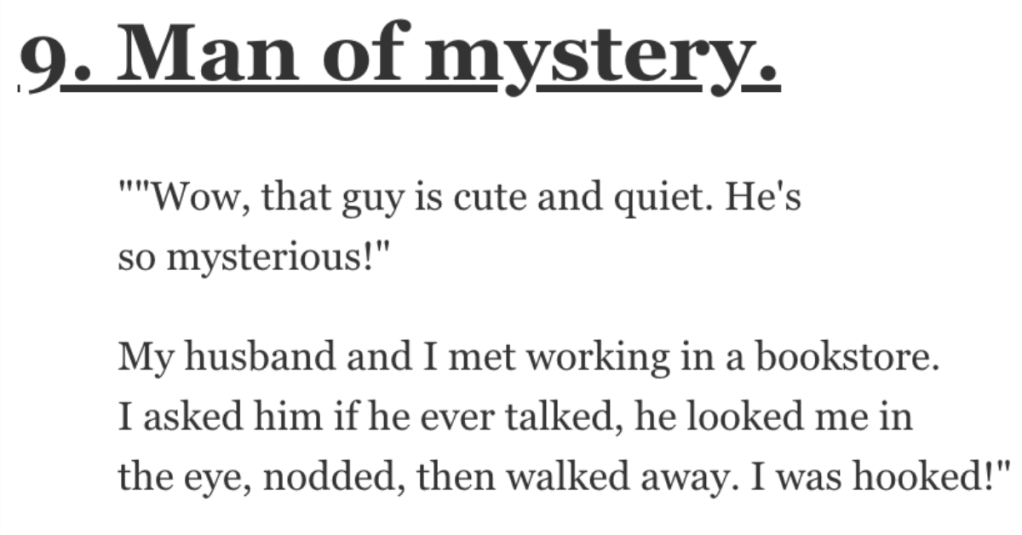 What Was Your First Impression of Your Spouse? Here’s How Married Folks Responded.

I’m not married, but I definitely remember my first impression of some of the girlfriends I’ve had over the years.

Some of them were really good and some…well, let’s just say it wasn’t love at first sight.

Do you remember your first impression of your spouse?

These folks on AskReddit sure do!

“We found each other on Tinder.

I ran into him on the way to the restaurant we were supposed to meet at and the first thing I thought was “Wow, he looks so much better than his profile pics. Thank God he can’t use a camera well or else he’d probably be snatched up already.””

“She has beautiful eyes and she was so pretty (still very much so).

I was so nervous, I went to bathroom and gave myself double finger guns and said don’t screw this up.

“I thought he was an ex-convict.

He’s super muscular, tattoos covering every inch of his body; all around just a very threatening looking guy. He came up to me and told me “I think you’re adorable. Can I have your number?”

I was petrified because I have never dated or attracted anyone of this type. But he charmed me. Turns out he’s a huge softy with a goofy personality.

He cracks up at the smallest things, he loves sweets like a little kid, getting tucked in at night and is scared of the dark. I love him to bits!”

For context, it was my first day at my first (student) job, and my boss was showing me around and introducing me to everyone by going to all office rooms, one after the other.

My now-husband was in the very last room, and I was “warned” that that team was a bit “special”, mainly because of their very direct and sometimes weird/harsh sense of humor. What surprised me was his hair color, as my now husband was the only one in this department of ~50 people with brightly colored hair.

So while I didn’t get to talk to him much that day, I remembered him for his hair color alone. It took us a few more weeks getting into contact and to eventually start dating, last weekend was our ten year anniversary (and third wedding anniversary), and he still rocks his brightly colored hair.”

“I thought he was so cool.

We had talked online for a few days but it wasn’t until I saw him walking towards me when we met for our first date that I realized he was way out of my league.

Luckily he thought the same thing about me.”

“I was a bartender and he was one of the first to get a drink from me that day.

So I didn’t think much, I was still trying to screw my head on and jump into the shift. He kept coming back tho, not always to get a drink sometimes just to stand near my bar while I made drinks. His friend brought him there for his birthday, yet he spent most of his time with me.

Once I noticed him, I thought he was a lovable dork. I needed to a have a conversation with him where I could be myself and not in working mode”

I was wasted and have absolutely no recollection of meeting her at all. Her first impression of me however was that I was obnoxious and probably gay.

I guess first impressions aren’t always the most important.”

“”Wow, that guy is cute and quiet. He’s so mysterious!”

My husband and I met working in a bookstore.

I asked him if he ever talked, he looked me in the eye, nodded, then walked away. I was hooked!”

“Electric blue eyes that you can see from across the room, wicked good sense of humor, confident, so attractive, love his freckles.

I felt drawn to him like a magnet, and literally had an almost overwhelming urge to rub my face on him like a cat, which totally freaked me right out. I immediately texted my sister and asked if that had ever happened to her because I felt like such a weirdo.

She screenshotted the convo and saved it; now she sends it to me every year on that date.”

11. You better thank that guy.

“Met my wife on a blind date.

First impression was that the guy who set us up did me a total solid.

“When I first saw her I thought she’s hot and way out of my league.

After mutual flirting and going on a date I thought she was smart, funny, attractive, and still out of my league. Been married for five years.

Nothing has changed, I still think she’s out of my league.”

What was YOUR first impression of your spouse?