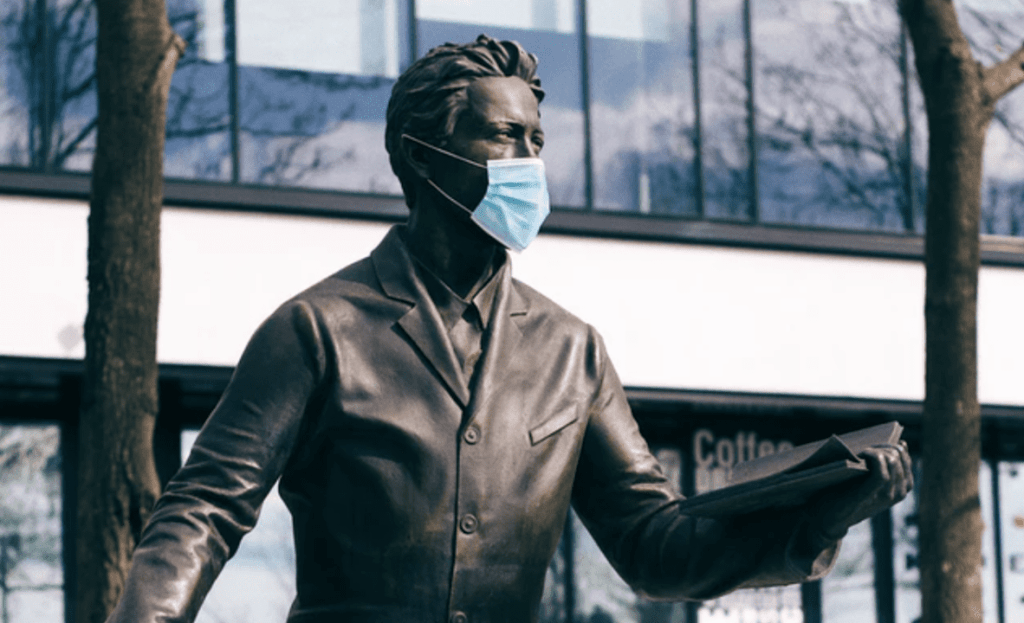 We’re only halfway through 2020 so far and it’s been a rough year.

A worldwide health crisis, riots and protests in the street, and too many other bad things to even get into here.

How will people talk about this year 50 years down the road?

AskReddit users weighed in on this question.

“Son, have i ever told you why i appreciate the outdoors so much, and why you should too?

Dad, you’ve told me this a thousan-

Well I’ll tell you. Back in the year 2020, there was a global pandemic, everyone had to stay inside, I’d be inside for up to a week at a time!

Da, can we go inside for fu-

This lockdown, it went on for a few months, people couldn’t see eachother the same way we are now.

Dad, can i atleast go put my robot arm on charge, i got it off wish, it’s a hunk of shi-

Fresh air for some people was un-heard of for a time.

Can we talk about ANYTHING ELSE?!

Alright alright! Christ child you have no patience. So before we had implantable air filters, we wore these white face masks, to keep the virus away, but only when we went outs-

son’s eyes roll back and he spasms finally, my cy-uber is here, bye dad!

Alright im on my way!

Pulls pully cord from hip, drives inside with tracks for legs.”

“It started out so terribly but we learned from a lot of our mistakes for once and made some progress as a world.”

“That humanity can achieve great things even during the worst of times.

Light up the darkness.”

4. Some things to consider.

“I hope we can tell them stories of an ancient culture of people who hated other people for how they looked. The beginning may be an angering story of race wars and police brutality but hopefully the end will be how goodness prevailed and people started loving other people.

Treating fellow humans with respect no matter how different they looked.

This is the story I want to tell my grandkids.”

“It was the year of fire…

…the year of destruction…

…the year we took back what was ours.

It was the year of rebirth…

…the year of great sadness…

…the year of pain…

It was the end of history.

It was the year everything changed.”

So there was this time in 2020 where the humans got so panicked about a virus in China spreading that they stole all the TP.

I saw opportunity and created the Toiletpaperinator that would ration the amount of TP used. Of course there were a few minor issues with it and ended up throwing a TP party instead.”

“I’ll be long dead by then. But maybe i’ll write them a letter explaining how I was blamed for a lot of it by being a boomer, even though I was a democrat and liberal. And how I voted every time I could and to the best candidate I could.

And that I was truly frustrated and angered in (and before) 2020 by what seems to be the U.S. turning into a country that denies basic common sense, science and logic.

“The whole year was fucked up. Even the first half. Instead of my dreams coming true, my nightmares came true instead.

January: WW3 almost breaks out, Kobe and Gigi die, and the Australian bushfires.

February: Mr. Peanut dies, but it was still arguably the chillest month of 2020.

March: Pandemic, all sports cancelled, toilet paper shortage, and our livelihoods get taken away.

May (the scariest one yet): Murder Hornets, Florian loses his battle with cancer, Brian May has a heart attack, parallel universe, George Lloyd protests, riots, racism, and SpaceX.

“I survived Coronavirus, Murder Hornets, flying snakes and spiders… AND YOUR COMPLAINING ABOUT A BOY?!

Be quiet and get over it.”

“Hopefully that it was the year racism was truly stamped out and no longer tolerated in positions of authority.

Everyone is mean to him and out to get him and he refuses to take any responsibility.”

“Oh we don’t call it that anymore.

“The first American made rocket, with American astronauts launched from America in 30 yrs from a private company paving way to private space flight and colonization.”

“Nothing that they will remember.

If people didn’t remember 1918, flu virus, california race riots, history, then they sure aren’t going to remember 2020. Like do you even what happened 10, 20 years ago, let alone 50 years.

“Now this is a story all about how

Our lives got flipped,turned upside down

Just pour me some Hennie

And I’ll tell you what happened in the year 2020

In January most of Australia was razed

Then virus spread further, sweat dripped down many a dome

So everybody nonessential had to say “home sweet home!”

So people were cooped up, day after day

with panic and hysteria rising along the way

Everybody panic buying to fill their pantries and cabinets

While politicians went “it ain’t that bad”

“Get back to work and off your ass”

Can you how they themselves were responding?

Blaming others and insider trading

It was a horrid year I wish could forget

But it could get worse than that, you bet?

In the comments, please tell us what you’ll remember most from this tumultuous year.