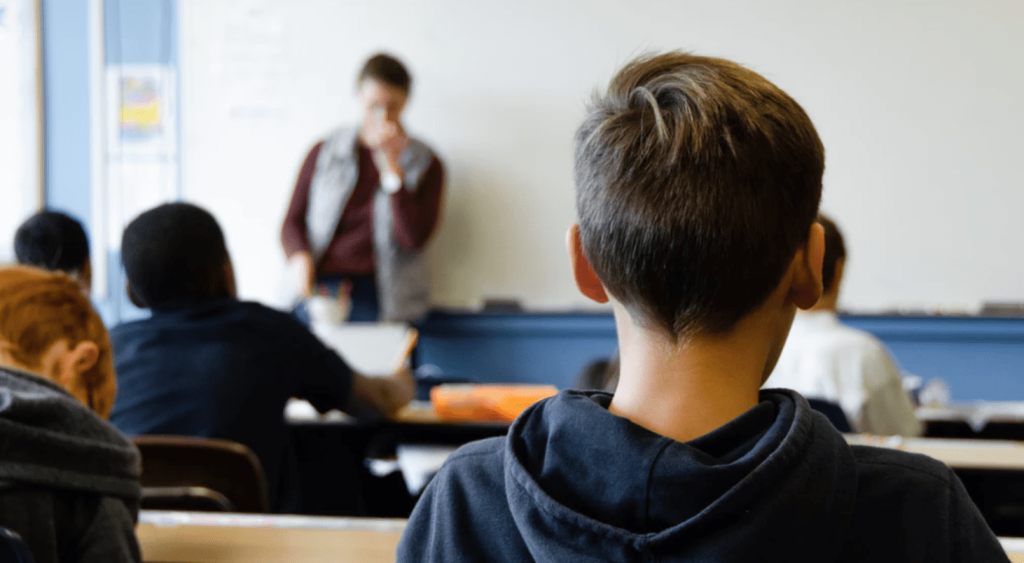 Looking back on it, I guess some of my teachers definitely did tell us some tall tales just to keep us from doing certain things or to get us to do stuff in school.

Hey, parents do it all the time, so why not teachers, right? Right!

In this article, people recall things teachers lied about to keep the kids in line. And some of the people are even the teachers themselves.

Let’s take a look at what AskReddit users had to say.

“I tell the kids to be careful around the Bunsen Burner because I taught a class once where a kid bumped one over and it caused the classroom to catch on fire.

Also I exaggerated because I only lit the curtains on fire not the whole classroom. We didn’t even evacuate, the teacher put it out so quickly.

I hope one day if any of my students become teachers it will become the science teacher equivalent of the chair rocking story.”

2. In the jailhouse now.

“I teach at a pre-k daycare and had one little boy who was constantly hitting, biting, and whacking at other kids – especially the girls. So we told him that boys who hit girls go to jail.

I said that another little boy was arrested for hitting girls a few weeks ago and we have to visit him in jail now.

“On snowy days I would tell my elementary students that the more they talked, the less it would snow and the lower the chance we’d have for getting out early.

They didn’t believe me.

I told them to put their hands in front of their mouths and breathe….feel that warm air? Well all of your warm air is going to melt that snow!

Yep, they believed me then, so they’d be quiet. I’d keep an eye out the window and when it would start snowing harder, I’d whisper, “look you guys! It’s working!””

“A co-worker of mine who teaches microbiology (college) tells her students that she will put their phones in the autoclave to be sterilized if she sees them out in class, for safety.

She swears every semester that she actually did it to a student a few semesters ago. It’s a lie but it works and the rumor has been passed around as truth. It keeps the students safe so we all also swear to it’s truth if asked about it too.”

5. That should do the trick.

“In Elementary school, there were problems with kids on the buses opening windows and sticking their hands out as the buses were moving.

Our Vice Principal gathered all the kindergarteners into the auditorium and told us a story about how a girl stuck her hand out of a bus window to wave to someone; she told us the bus drove past a stop sign, the girls arm hit it and got cut off.

I doubt it was a true story, but it scared the hell out of every six year old in the auditorium.”

“I came into a class halfway through the semester because the old teacher quit. Students were notoriously bad.

So I told them I was a retired military drill sergeant, and I must have done a good acting job because after I yelled a couple times, those kids were quite obedient.”

“I told my student on fire drills if we don’t get out fast enough the principal would give us a 5 hour out of school seminar on safety.”

“I teach 2nd grade. I tell my students every year that I can tell if they are lying by looking at their tongue. Then, when a kid lies they won’t stick out their tongues. I catch a kid in a pretty obvious lie at the beginning of the year to prove my point. It has worked for 8 years now.”

“Teacher here. I have a ton of stories, but the one that comes first to mind is the “escalator incident”.

I hate untied shoes, see, and I have told more than one sloppily-shod student that it’s because I once saw a guy lose his leg to the exit teeth of an escalator because his shoes were untied.”

“As a science teacher, I make up all kinds of shit that “could happen” when you mess with the chemicals ranging from going blind to amputating bits of your body off. Deadpan delivery.

Eye contact that goes on for way too long.”

“My boyfriend is a teacher, and he tells kids that he’s deaf in his left ear so they have to be quiet while someone is asking a question so he can hear them.

“2nd Grade: I have a thousand stories.

Best one lately: When I am sick. I have written in my plans. At 10:43 take out your phone and then choose a student to stop talking. Then I tell them to say that they just got a text message from me saying that I’m watching on the camera that I’ve hidden somewhere in my classroom., and that I caught them misbehaving.

The kids always ask me where the camera is and I say that I can’t tell them until they’re in middle school.”

“These are the stories that my teachers made up while I was in 1st grade.

The first one was about a reckless boy who played with the paper plane against his mother’s will and it ended with his mom dying of lethal trauma from a paper plane hitting her in the temple.

And the second one was about a girl who put a power plug into the socket without her parents supervision and she were thrown away from electric shock burst-wave with her hair and hands burned.

The fact that I remember it ti this day says a lot.”

“Our Boy Scout leaders told us that a swimming pool was treated with a chemical that turns red when in contact with pee so if anyone pees in the pool, everyone will know.”

Those teachers were lying to us all along!

Do you remember any funny examples of this from your own life?