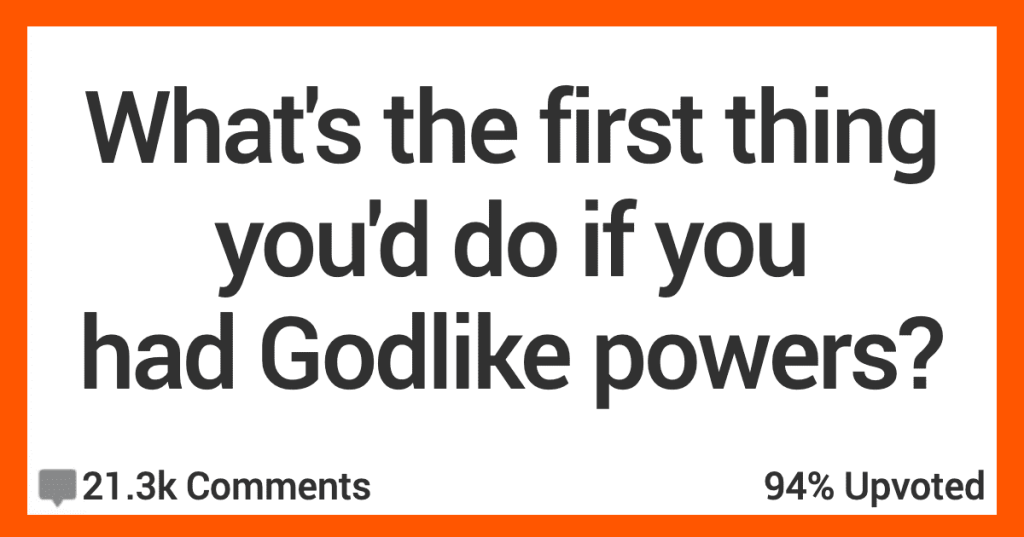 If you had Godlike powers, what would you do first…?

Don’t lie to me! I know you’ve thought about it before!

And today we’re gonna hear what AskReddit users said about this.

Leave earth and just wander around the infinite void know as space.”

“People now have unlimited teeth. As in, they will grow back if taken out.

Imagine going to the dentist and their only job is to remove the tooth and pat you on the back.”

“Sort my knees out.

I’m in my mid-twenties, and I’m not thrilled by the prospect of having to go the rest of my life on this dodgy pair.”

“Ask my cat if she likes me.

“Have the ability to talk to my dog and him understand me so I can tell him to calm down and explain that I just want cuddles sometimes.”

“Modify my own behavior/psychology to be more resistant to corruption by the power, more wise, and immune to insanity induced by the huge amounts of time and boredom.

Basically I would get rid of all my human instincts that were born of evolution in a limited-resource and entropy-prone world without sacrificing compassion and understanding of the fact that other humans still have those instincts.”

“Learn everything I can.

From that work out what needs intervention and what needs to be left to people to solve, then act on that.”

“Crank humanity’s empathy and patience up a little. Reduce the aggression down a notch.

Give people conscious control over reproduction– no woman gets pregnant unless she wants to, no man fathers a child he doesn’t want. And, uh, seriously overhaul women’s parts, nobody deserves cramping this bad…

Make sustainable and green fuels and resources easier and more profitable to manage.

Nudge science in the right direction for undoing environmental damage.

Un-extinct some species– and make profitable body parts toxic, but only to humans. Like, rhino horn makes your v**lently sick and gives you epic s**ts.

Anytime a person gets greedy or power hungry, they glow orange so we know they’re acting only for themselves.”

“The first thing I would do is stop time for the whole universe (myself excluded) so I would have more time to think about what to do and avoid catastrophic unintended consequences.

Hopefully I remember to resume time before I leave this dimension to some other reality….”

What would you do?