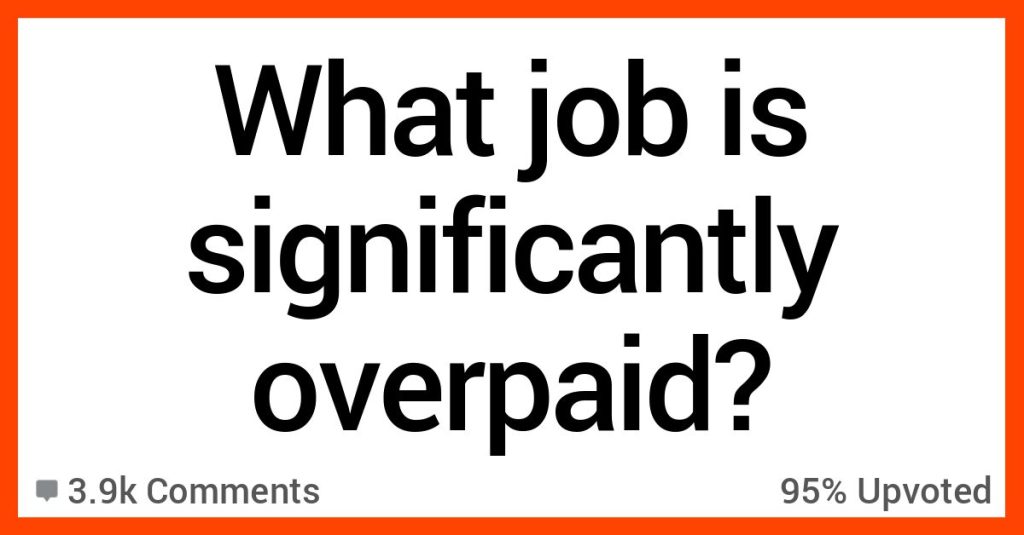 People Reveal the Jobs That Might Be Way Overpaid

As people around the world fight for a living wage, that fight is made all the more frustrating by having a look at those toward the top of the income ladder and saying “Really? You get paid THAT much for doing THAT?!”

What job/profession is over paid? from AskReddit

Let’s see who Reddit thinks needs taking down a peg.

I’ve been trying to rent a house (UK) for 5 months now, during which time I’ve spoken to over 50 estate agents.

Years ago I installed satellite tv in a mega church preacher’s new mansion when he moved in. We were upselling soundbars at the time for $500 each. I had set up a demo and he listened to it for 30 seconds before buying 2 without looking up from his phone.

A couple years later there were bad floods in the area and they locked the doors of both of their churches to all of their displaced parishioners. I think they even claimed FEMA money afterwards.

The highest paid state employee in Michigan is the University of Michigan’s football coach.

I’m willing to coach the team to a loss against Ohio State every year for half that.

I don’t know how true it is but I’ve been told that printer/copier technicians make pretty good money for what is mechanically as difficult as an oil change, but cleanse correct me if I’m wrong

We also needed a realtor to sell and ours was extremely pushy with us. After only a few days, we had an offer 5k under asking.

She pushed so hard for us to take it. I just said no.

We ended up getting 3k over after one week on the market.

By the end of our business together, there was no fake sugar interactions. She knew I didn’t like her

She didn’t ask for a review but I left one anyway.

I’m a physician and hear people complaining about how much doctors get paid all the time.

And I just assume that they must have no idea how much the administrators make.

Home inspectors charge hundreds, sometimes thousands of dollars to miss obvious flaws in the home you’re about to purchase.

Worthless as t**s on a boar.

In a way. Many are presenting a completely false lifestyle. I had a conversation with someone who wanted to be an influencer. Had a moderate following and may well have been able to grow it to decent numbers with a bit of work, but they were totally delusional about the commercials of the whole thing.

Fact is, apart from a small few at the top, the vast majority of influencer stuff is peppered with “promotion for exposure”, sh**ty CPA stuff and grimy white labelling. The person I was speaking to was adamant that “brands just approach you” without having any understanding of how marketplaces work.

I’m not sure ruin my own private life to squeeze a few quid from an unsustainable business in the hope I get incredibly lucky and make it to the top.

I should be paid a livable wage by my boss, but no, I just kiss a** to rich people and make $500 a night to literally destroy lives.

Have it your way society.

I make $36.21 an hour to sit there and occasionally grind something with an angle grinder. I also unpack and pack up tools at the start and end of the day. That’s pretty well my entire job.

One day last year I got paid over $1,600 to do absolutely nothing. No on call. No “maybe something will need to get done later”. Just sit on your phone for 12 straight hours

Don’t get me wrong, the stuff they do is important to ensuring successfully run businesses.

But it’s not “99% of the company’s adjusted salary and benefits payments go to these 7 people” important.

I’ve scrolled down quite a way, and I can’t believe nobody has nominated liability attorneys.

They collect huge hourly fees or commissions and don’t do anything productive.

They just move money from one party to another. –

Every one I’ve worked with pretty much just sends out emails, attends meetings, and throws out a “Hmmm, yes, this seems very important” with a serious look on their face. Like they’re supposed to “guide” the company but most of the time that realistically looks like them asking other smarter people for advice, signing off on it, and then getting people who actually know wtf they’re doing to apply that advice.

It’s weird how much CEOs are idolized and paid in American society for how little value they actually add to a company compared to the people doing all the technical work.

I’m sorry but I just don’t see why anyone needs to earn 25million+ for two months worth of work.

And I’ve worked in both film and theatre and understand all that goes on to make productions, just seems crazy to me.

Great work if you can get it.

15. Whatever This Guy Does

I have been working for three years and I’m not entirely sure what I do.

Sometimes I write code. Mostly I sit in meetings where I say nothing. But I work for the government so I’m pretty safe from being fired or let go.

Definitely the most I’ve ever been paid for the least work.

So if you’re looking for a career change, maybe one of those will do?

What job do you think is overpaid?