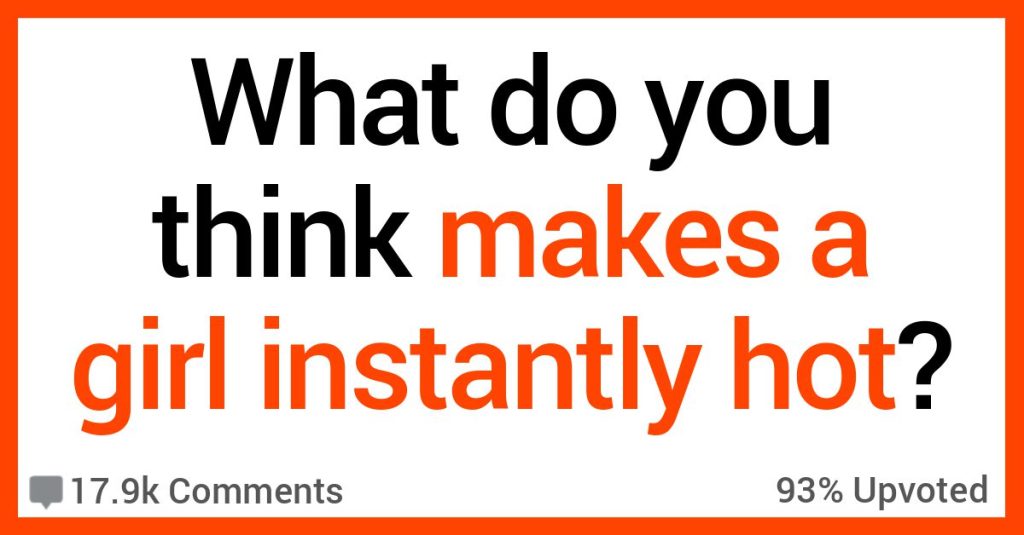 13 People Share What They Think Instantly Makes a Woman Hot

Whatever floats your boat.

Well, we’re about to hear what floats the boats of all kinds of folks today! And I’m excited about it!

What do you think makes a woman instantly hot?

AskReddit users shared their thoughts on the matter.

“Being oddly passionate about a really niche hobby.

Knew a girl who was oddly interested in mushrooms. As in, she’d drive across state lines to really mountainous areas to go mushroom foraging and would invite me along. She knew all the science and s**t that went into finding and identifying them and everything.

Idk. Seeing that kind of passion about something you know few other people would have any interest in is hot af to me.”

Being kind to others.

“For some reason, whenever a girl wears a clothing item of mine (can be a sweater, a shirt, jeans, anything), she becomes 100 times s**ier.

I´m not saying this is something that happens often to me but the few times it did happen, it was magical.”

“Having artistic traits is a huuuge turn on for me.

I can’t really explain but I’ve fallen in love with artists since I can remember.”

“A sense of humor. I used to be a waiter and I was serving a girl and her mom. This girl was kind of pretty but not really my type.

By the end of me waiting on her, from all her jokes and everything, I thought she was insanely attractive.”

Something about genuine, unadulterated happiness that really makes me feel for them.”

“For me it’s a girl who is willing to take charge and isn’t afraid of both her masculine and feminine traits.

Ironically, I think that’s something men should aspire to as well. My partner is very much like that though – loves camping and getting dirty, doesn’t mind cursing like a sailor, but is also an amazing preschool teacher and is tender with individuals who deserve it.”

“I think its the confidence.

I read a quote once that said “she acted confident and He forgot who he was looking at” and this has stuck with me since then!!

Sometimes we see a woman that is deemed average but all the men are absolutely crazy about her and we’re like umm what?? ITS ALL IN THE CONFIDENCE.”

“She loves life more than social norms and teachings.

My wife taught me to care for bees, spiders, and all living life. I wave to the trees that wave at me.

She taught me to listen to nature and put my feet in the dirt.”

“When it comes to personality, a girl that is nurturing, has a good heart, and does the right thing even when no one knows she did it and doesn’t want anything out of it.”

“Doesn’t talk about people behind their backs and will tell those that are doing it about others to stop.

Also doesn’t judge anyone by their looks, lifestyle, circumstances or past…

I’ve never met a woman as interested in film as I am so I have to go to subreddits to get the conversation I crave.

If I met a woman who was into old classic cinema, I might propose on the first date.”

“An even mix of logic and humility.

By humility, I don’t mean submissive either, I mean a real capacity for introspective learning.

And now it’s your turn…

In the comments, tell us what you think makes a woman instantly hot.