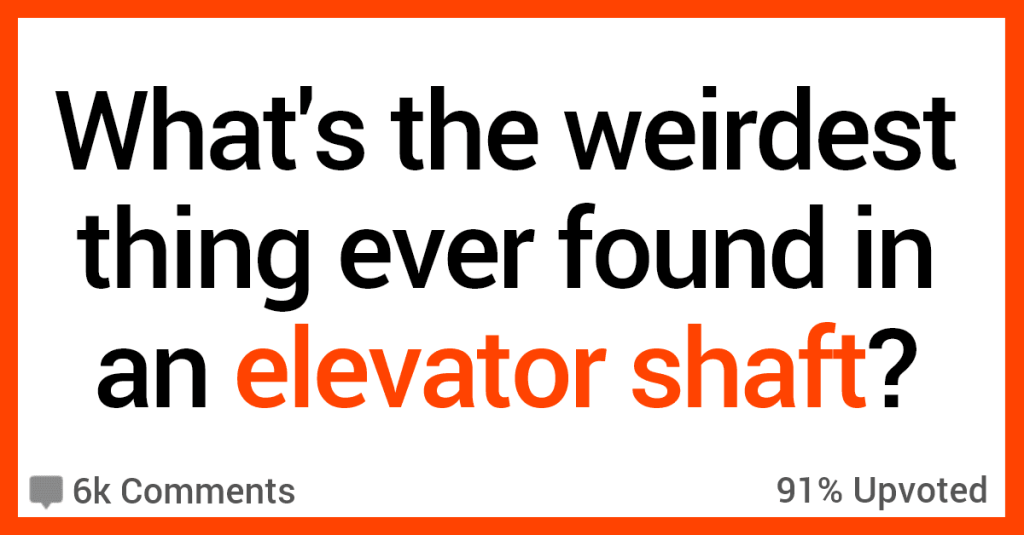 People Reveal the Weirdest Things Ever Found in an Elevator Shaft

It’s hard to overstate just how important elevators are to modern architecture.

They’re really the only thing that allows for high-rise buildings to exist. Without elevators, we couldn’t have skyscrapers, and the whole of our cities would be very different.

Which is something I hope technicians remind themselves of as they’re discovering poop and stuff.

Elevator-maintenance folks, what is the weirdest thing you have found at the bottom of the elevator chamber? from AskReddit

Reddit has a surprising number of stories about this.

Pest control tech here, Snakes had gotten into the pit and were climbing up and dropping down on people as they rode the elevator.

My dad was an elevator mechanic for about 15 years.

He had a very dark sense of humour and would come home with some of the craziest stories. (For example, any time he was in an elevator, he would shake it a little or tap on the displays or buttons and go ‘Yep. Total piece of crap. Inferior piece of crap.’ and I think he mostly did it to freak people out.) One of my favourites:

My dad saved it and gave it to the building manager to see if it belonged to anyone in the building.

It was the one time he ever told us a story that involved him saving an animal instead of finding dead ones.

Not a technician, but do work at a large hotel.

A few years ago one of our elevators stopped working. Turned out when they opened it up they found a 3-ft pile of guest folios that were never delivered to the rooms.

Later when we looked on the camera we found it was a security guard that got tired of delivering them to the rooms and instead dropped them down the elevator shaft. He did this for months until he was caught.

Worked security in a large department store, we routinely had to pop it open to retrieve dropped keys, wallets, and phones.

Recovered a $2500 gold necklace covered in poop.. a would be shoplifter darted out of our jewelry department and “suitcased” the necklace while in the elevator. When he realized we were waiting for him at the exit level he went back up a floor, removed it, and dropped it down the shaft.

We arrested him anyway, much to his surprise.

At a place where my wife used to work: a body.

There was a crash from the elevator area. The boss went to see what it was, came back white as a sheet, and said “Do not go out there.” Two maintenance guys had been working on the elevator, one was in the bottom of the shaft, and the other one made one small error…

Not an elevator technician, but I can tell you some dude, at some point is going to find a kindle at the bottom of a shaft in a Toronto hotel elevator.

Rules to remember: Rule #1: Always check that you zipped your carry-on and didn’t leave a gap in the bottom Rule #2: Kindles fit through small carry-on bag zipper gaps and elevator shaft gaps

I worked as a phlebotomist in a hospital and had just drawn an elderly male patient.

As I pushed my little cart into the elevator to go back down to the lab, his blood vials rolled off and both went right down the gap into the shaft. I felt so bad and went immediately back to tell him I had to redraw him. He was thrilled! Said he was excited his blood would be down the shaft for eternity.

Such a funny guy.

Not elevator maintenance but one time I dropped a set of wheels for a cart in the crack. Im sure some maintenance man is going to be concerned to find loose wheels in the elevator of a nursing home.

Like some elder person is walking around with a wheel less walker.

“In 1988, the same bones were rediscovered when a new elevator shaft near the south parking lot on Elm Street was excavated. At that time, 11 skulls and 88 pounds of bones were found on one day, followed by 119 more pounds of bones. The Enquirer reported that they were being stored at the morgue.”

A few months ago we had a floridly psychotic patient (think staring into space, can’t form a coherent sentence, etc) brought into hospital. There was a fire alarm at an apartment building and when fire went in, they somehow found this guy living in an elevator shaft. He had evidently been there for some period of time.

Most of his delusions that he was talking about for me (that I could understand) were about time travel and Jesus, so we were joking a bit that he wasn’t actually psychotic and was just time travelling Jesus.

The company where I worked had an old heavy-duty freight elevator that was semi-abandoned. It was more like an automotive lift with giant pistons embedded in the ground, but installed in an elevator shaft.

When they needed to move something huge, they would fill the hydraulics with oil. It took hundreds of gallons to top off the system, including the giant pistons, and then they would use it for a day. A few months later they would try to use it again and find the oil gone.

Once, they planned to use it the following day, so maintenance pumped in the oil to get ready. The next day – no oil. They refilled it the morning of the move and got one lift out of it before it stopped.

The company knew it was spilling hydraulic oil into the ground under the plant and just did not give a s**t. The finally abandoned it for good when the maintenance guys threatened to report the illegal oil dumping.

My dad has been an elevator repair man for almost 30 year now. His best find to date was a $12,000 yellow diamond engagement ring!

Tried for a while to find the owner, but eventually he got to keep it.

I am not an elevator maintenance person, but I have been in dozens of elevator shafts for work. I’m a Bomb tech, and when I was in the Army I did a lot of POTUS/VIP missions in conjunction with the secret service. They don’t have a bomb squad, so they steal us. It’s a great gig, you get to travel all over and stay in some insanely nice hotels.

Anyway, the elevator shafts must be cleared to ensure that there aren’t any explosive devices. Basically, any place that POTUS or the VIP will go needs to be checked out. I’ve done a fair amount of “elevator surfing”, which is riding on top of the car.

The weirdest (and funniest) thing I’ve seen was a 12 inch (around that height) Superman figurine that had its feet glued to the top of the elevator. The head was slightly tilted back and the arms were pointed upwards so it appeared like Superman was flying up, up, and away! whenever the elevator was in use. I have a picture of it saved on an external hard drive somewhere. That s**t was hilarious.

So im a fire alarm technician, and in buildings with a fire system, we have to test the detectors in the elevator shaft on an annual basis… The elevator tech gets called in and while he does his inspection, we get access to the detectors.

The weirdest thing we’ve ever found? One time we went into an elevator pit and there were hundreds of little balled up pieces of tin foil all over the floor of the pit. We unrolled one and inside was a roach… Not the bug, the discarded stub of a joint.

Apparently some kid in the building would walk down the stairwell, go into the back alley and smoke a J. Then ball up the roach in a piece of tin foil, and since there was no place to dispose of it, and probably didnt want to get caught throwing it away in his apartment, he just chucked them down the elevator shaft as he went back up.

Concierge knew which kid it was because he saw him on the security cameras, so he just told the kid, “hey, we dont want you throwing the tin foil balls down the elevator shaft, so if you have anything to throw away, you can use the bin behind my desk, and I wont say a word.”

Elevator people are the true heroes.