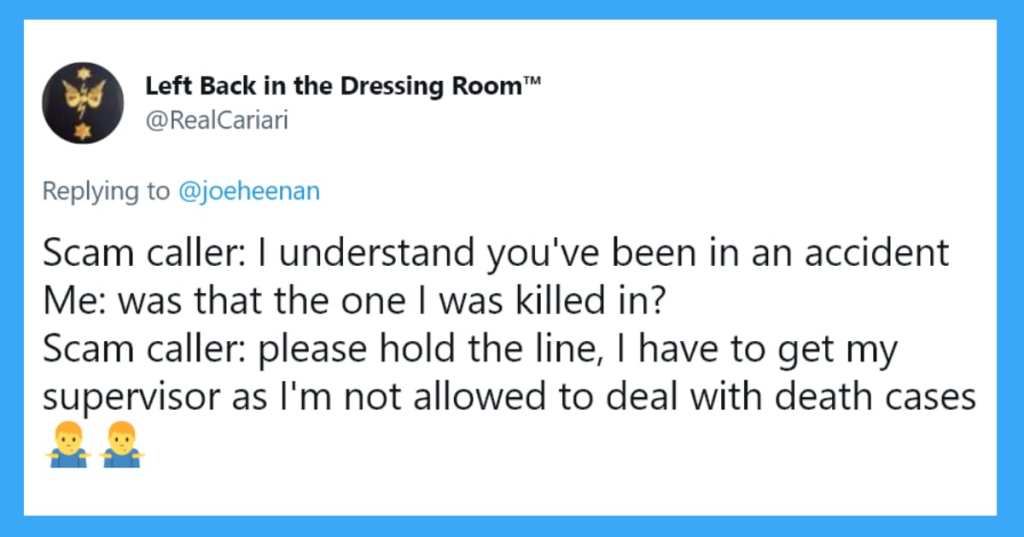 People Reveal Their Favorite Ways to Deal with Scam Callers

I would say that these days, roughly 1 out of every 1 phone call I get is from a scammer.

That’s not to say I don’t have friends or family who communicate with me. It’s just that that’s usually over some form of text, or in person. If it’s an actual *phone call,* it’s almost definitely a scam.

And boy oh boy are they tiring to deal with.

I love scam phone calls.
I pretend I'm an old Scottish woman desperate to pay them.
My record's an hour.
I pretended to go to the toilet 4 times during that one & spent half an hour reading out my card details incorrectly.
At one point I said my couch was on fire.
Great fun

Lucky for us the internet is replete with suggestions on ways to turn those annoying calls into fun little diversions. Let’s let Twitter teach us how to scam the scammers.

The best supervisor tag-in ever.

Scam caller: I understand you’ve been in an accident
Me: was that the one I was killed in?
Scam caller: please hold the line, I have to get my supervisor as I’m not allowed to deal with death cases
?‍♂️?‍♂️

How about you just come do it for the entire state while you’re at it?

My Dad used to stuff like that. He was once offered free replacement windows, they asked how many he wanted, he replied 500. Yes he said may as well do the whole street.

The Batman was right – The Penguin is a true menace to our city and must be dealt with at once.

I had a company ring me about an accident – I said thank god you’ve called I need to report that I was assaulted by a penguin at Edinburgh Zoo – then said I can’t sue the zoo so I want to press charges against the penguin – can u help me ?? They hang up then not sure why

You’d be surprised what people will hang on through in the pursuit of cash.

Another favorite is to agreed to all their request, but first I want them to pray with me. I make up some real weird crap, about forgiveness for all the laws I’ve broken, fraud, violence & murders I’ve committed – most hang up, but some still want to pursue the scam! ?‍♂️?

Getting into character is one of the most fun ways to mess with ’em.

I did about 17 minutes as a posh old lady before one of them started swearing at me in his old language, then he said in English, “YOU KNOW WHAT THAT IS? YOU’RE A COCKSUCKER.” I replied, “oh goodness, I haven’t done anything like that since my Dennis passed away in 1973.”

Think of it as a public service to put your unlimited plan to use.

I know what you mean, which is why, if they’re just trying to sell something, I’ll thank them and hang up, but if it’s an obvious scam attempt (your computer has a virus, etc.), then it’s game on, because all the time they’re talking to me, they’re not ripping someone off.

The ol’ bait and switch.

I love the ones telling me I have an issue with my Windows on my pc…..I keep them in talking about windows, then after about half an hour I tell them I’ve got a Mac and I thought they were on about double glazing.

Now I know my ABCs, next time won’t you please not be.

I’m now disappointed I’ve only managed 34 minutes. Repeating back instructions using a made up phonetic alphabet is a fun challenge (“A anuerism, D detectorist, B bedpan, L lasciviousness” etc.)

I don’t know what’s so confusing about that.

“So that’s T for… Pterodactyl… K as in Knight, and M as in Mancy… hello? Hello?

It was a dark and stormy night…

My fave is to be a “detective” investigating a murder at the premises, just picking up the phone and how the caller is a suspect as they must’ve known the occupant, and they must attend their nearest police station to help with enquiries….

That oughta keep ’em busy for a while.

How do you handle scam calls?