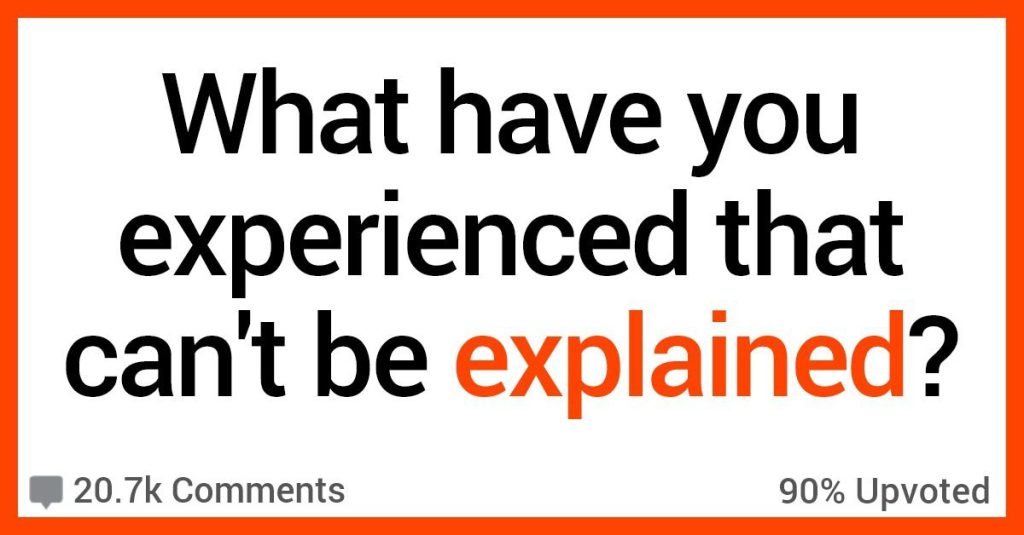 Life is full of little experiences that feel just out of the ordinary enough that we feel they need explaining, and yet, sometimes, we can’t.

We have a tendency to call these things “supernatural,” as though there’s no way in nature it could actually happen. But is that true? Or are we looking at it too narrowly?

What is a supernatural event that happened in your life that just can not be explained? from AskReddit

Here are a few stories of interest from Reddit. See if you can spot any explanations yourself, or if you’re left baffled.

I had a phase in my mid-teens when I would read the obituaries in the local newspaper. I saw a name that was familiar as it was the same as a family friend. It had his full first, middle, and last names. I didn’t say anything to my parents since I figured they already knew.

A few days later my mom told me he died and I said I knew since I saw his obit. She said, “He died last night in his sleep.” I went back through the newspapers (my mom kept them for a week before throwing them out) but the obit wasn’t there. When the real obit came out it had his first and last name but just his middle initial. This was almost 40 years ago and I still think about it.

The Protector on the Stairwell

When I was a kid (about 10-12ish) I was carrying a load of laundry upstairs home alone while mom was out doing errands. We have this weird carpet runner over our hardwood stairs that’s only really attached at the top of the flight but otherwise not fitted or secured to each individual stair, so naturally I step on an air bubble of carpet with my vision obscured by the laundry and fall backwards while bear hugging a bunch of blankets.

I specifically remember thinking “welp, guess I’m about to die” while almost airborne with just my big toe left on the carpet when I felt two hands, one on either side of my shoulder blades, give me a firm shove that launched me back up on the step and diagonally against the stair rail. I assumed mom somehow silently came back early without announcing herself and turned around to thank her while still clinging to the railing, but no one was there.

I scurried upstairs to put my things down while calling her name and walked the house afterwards to check if any doors were unlocked or if her car was there. I finally resorted to calling her cell where she told me she was hitting up a few more stores. It still feels like there’s a presence on that stairwell- like someone’s watching but in a protective way rather than sinisterly.

I had a dream once about my high school best friend who had moved out of state and started a family. I hadn’t seen her or spoken to her in at least 10 years and had never met her child, except seeing pictures/ posts on Facebook and commenting on them.

In my dream I was walking down a street at night and out of nowhere her little girl appears next to me and I asked her, “Where is your mama? Why are you by yourself?” I remember her taking me to some bushes near a random house on the street and finding my friend in bad shape (beaten up or something) on the ground and I remember running to the door of the random house screaming for help and to call the police. This is all I can recall from the dream but I think there may have been a little more.

The next day, I wake up and think to myself, man that was weird. Maybe I dreamt of her because we had just spoken a little in comments of a Facebook post, I should send her a message. I go on about my day, go to work, get home later that day and sit on my couch and scroll through Facebook.

BAM. 1000 posts— Rest In Peace, etc – All of them tagged my friend and her daughter. I thought WHAT IN THE ACTUAL F*CK!?!? At that point there was no information as to what had happened, so I thought it must have been a car accident or something. Over the course of the next few weeks to months, more and more information came out and it was NOT an accident. My friend and her sweet baby had been murdered by some animal (I won’t refer to them as a person).

This happened about 5 years ago. I still remember the main parts of the dream vividly. I still am a little horrified that I had this dream that night. When it was happening possibly. I haven’t been able to tell anyone else about it either because just thinking about it gives me chills.

I was out with my parents, and it was late coming back home.

At around 2:30am we were at a traffic signal, a homeless guy comes and knocks on the window of the seat where my mother was sitting. As she rolled down the window to give him money, he said “check what is happening at your brothers house” he proceeded to take the money and walked away.

Probably thinking that he was a bit crazy in the head, we didn’t bother and went home.

Next morning mom gets a call from her brother’s wife. He has had a heart attack. At 2:30am.

Went with my brother to see an old family property my mother had inherited in a really rural area. We were just looking about, it hadn’t been lived in for decades. A bit of wind, a bit of a rainy day, and both me and my brother were inspecting the house until we started hearing a weird rhythmic knock coming from around the building.

Just a knock at regular intervals much like a clock sounds but a lot louder. We stepped out to look around, but the noise started sounding like it was getting further away from us, until it disappeared. We left shortly afterwards.

A couple of days go by, and I stopped by my mother’s. I ask her if she has any pictures of the original owner of the house which was her grandfather, so my great grandfather. She pulled it out, guess what? The man had a wooden leg as a result of a war injury. Told my mother all about it and it was like she was remembering him. She says that’s exactly how it sounded when he walked on the porch.

When I was going to my families home I got in a suv going down the road. This was in Bangladesh at the time and after taking the suv the next two hours would be a highway going down a forest.

I was sitting shotgun and along the highway their was an old man walking down the highway. He was hitchhiking and the driver decided to pick him up. He insisted on sitting in my seat and obliged as he was an older man.

About an hour down the drive our car collided with a bus and the shotgun seat was mangled up. We all got out and we looked around but we couldn’t find the old man that insisted on taking my seat anywhere.

Stories like these aren’t rare but I didn’t believe them. We all know the man sat in my seat and we all saw him. But he was nowhere to be found.

I grew up in a very rural area. Mostly crop farms everywhere. About a mile from my parent’s house, there was this old abandoned farm house that all the area kids said was haunted. They would sneak into the house after dark, all the typical stupid kid crap, but I believe there are things in this world better left alone and never went.

Years pass, the house fell into disrepair and was eventually torn down, leaving an old weathered barn. Well, I make a little side money selling photos of abandoned places, so I wanted to take a picture of the barn. I parked on the road and was walking up the drive, I made it about ten feet before I just could not walk any further. My feet wouldn’t move forward, my adrenaline spiked and I burst into tears. So I turned back and ran to my car. I didn’t feel safe until I got past a nearby creek you have to cross to get there.

I let it go, but a few months later we had to drive past the property after having Christmas dinner with my parents and there was a creature standing in the drive. It reminded me of the Faun from Pan’s Labyrinth, just super tall with a wide head and horns or antlers, but the eyes were more on the side of the head.

Again adrenaline kicked in and I burst into tears, but I was trying to keep it together because I didn’t want to freak out my kids. My husband asked if I was okay, I just said “you saw that, right”

I refuse to drive that road ever again.

When i was a kid (around 6) i lived in a very arid area, and a wide field of red dirt was between my house and my bud’s. Every day, walking over there, when I got about halfway across, I’d pick up a dirt clod or a small rock, and toss it behind me over my shoulder. About 10 seconds later, it would come flying back over my head and land in front of me. I’d just grin and keep walking.

I remember this really distinctly, even trying to replicate it later in childhood after I’d moved away, and being sad that it didn’t “work” any more. Didn’t question it as a kid, but looking back, just really weird.

Not scary but still not explainable: When I was 22, I visited my Grandma in her retirement home at Christmas. She was well, nothing out of the ordinary. A few days later I travelled to my then-boyfriend across the country.

Two days after New Year’s I woke up at 2 am crying. And I just couldn’t stop. I wasn’t really sad or overly emotional, but the tears just kept streaming down my face. Nothing like that ever happened and I was kind of confused, as was my bf. I fell back asleep a few hours later.

Three days later I was informed that my Grandma had died that night at about 2 am. Due to the divorce of my parents communication was difficult and we were only informed after the funeral.

I don’t believe in anything supernatural, but it’s hard to wrap my head around, especially since nothing like this ever happened again.

I had a dream at age 9 where I was walking through an alleyway with another boy (Who I didn’t know at the time) having a conversation about School grades or something.

2 years later I meet this boy, and turns out he’s a friend of my brother who’s a year older than me, but it still didn’t hit me yet that he was the one I was walking with in my dream.

Another 3 years pass, we are now in Highschool, and all 3 of us are walking through the usual alleyway that we passed through to get home, then a conversation about School grades pop up and I get hit with the biggest realization and feeling of Deja Vu ever.

I was reliving the dream that occurred 5 years prior and my memory of that dream became very vivid at that moment. They thought I was a mf Wizard predicting what they were gonna say a second before they speak. This happened 8 months ago, it was great.

What do you think of these stories? Are there any you think truly can’t be explained?