Reddit User Asks Women How They Deal with Not Being ‘Pretty’, and One Man’s Reply Will Blow You Away

AskWomen is a subreddit dedicated to asking women, well, anything. This is a safe place to candidly share thoughts, promote respect, and foster good discussions.

A few years ago one woman took to the platform asking other women how they “deal with not being pretty”. She went on to explain that she will never be pretty no matter what she does.

“I can wear makeup, do my hair, wear a lovely dress and heels and never look like a 9/10”

But from her post, readers conclude, it’s not only her “reflection” of her outer self, but it is also something deep within.

“How do you accept how you look and learn to love yourself regardless?”

She even goes as far as blaming people not liking her or not being invited to events on her looks.

Many Reddit users had uplifting advice to help her see she’s more than looks. And then one man stepped up and his response stood out among them all. 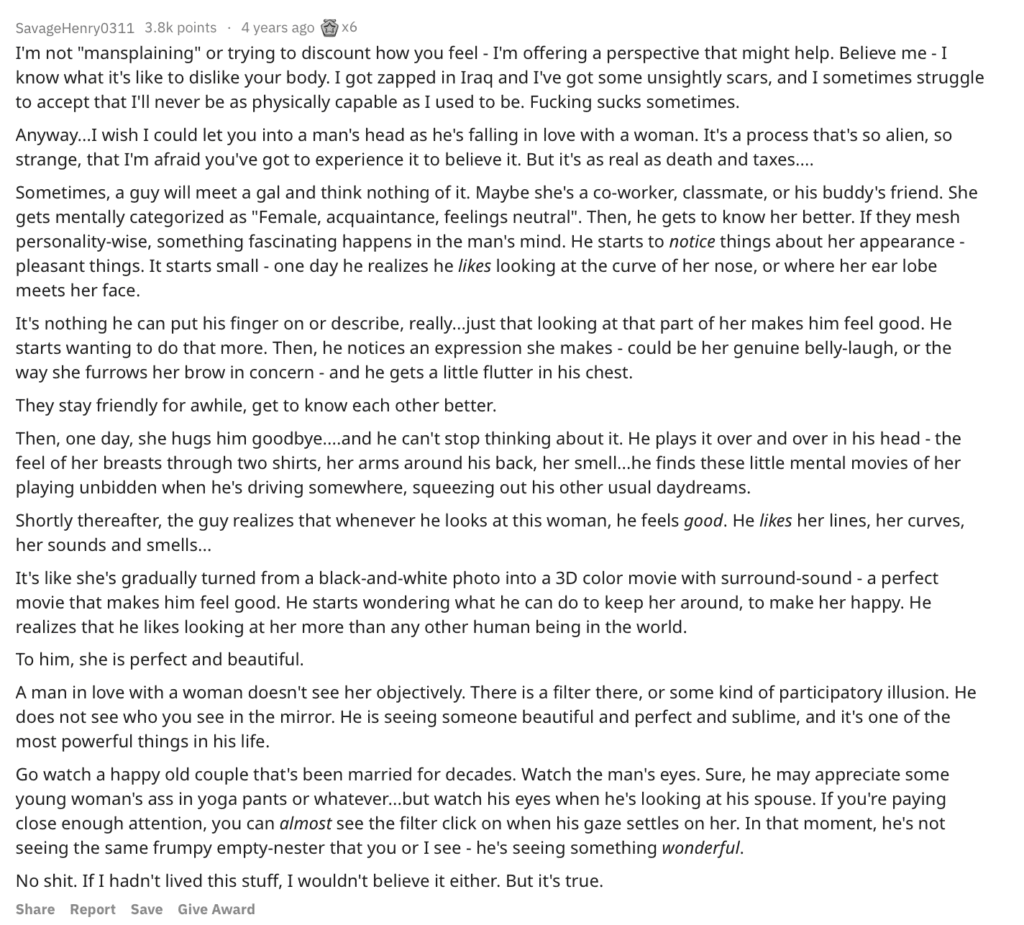 “It’s from the heart. It was written in one sitting at a coffee shop before work. It sort of poured out of me, and it’s as honest as I know how to be. I still believe it, years after writing it.”

“I’m not known for giving love advice. I’m a big former Marine who teaches Krav Maga in his spare time. I do EMS in the ghetto. I have a terribly dark, sarcastic sense of humor – the kind that really offends people who haven’t seen what I’ve seen, been where I’ve been. Soccer moms think I’m a monster, and coroners invite me to their holiday parties. I’d imagine a lot of people would be shocked to know I wrote that response, that I think and feel those things.”

“I am one of those people that folks seem to confide in, though. Maybe they know they aren’t going to shock me, and I’ll give honest advice if they ask. I’m also very respectful of people’s privacy. I think I was driven to respond to her because I saw some parallels in our experiences that might not be obvious to her, or to the casual reader. We’re also inherently different enough that my perspective might benefit her, perhaps give her a new way to look at relationships between people.”

My heart is breaking for her and she has since deleted her user account. But Savage Henry put it best:  “I really hope she’s happy these days, doing good stuff with people who love her.”