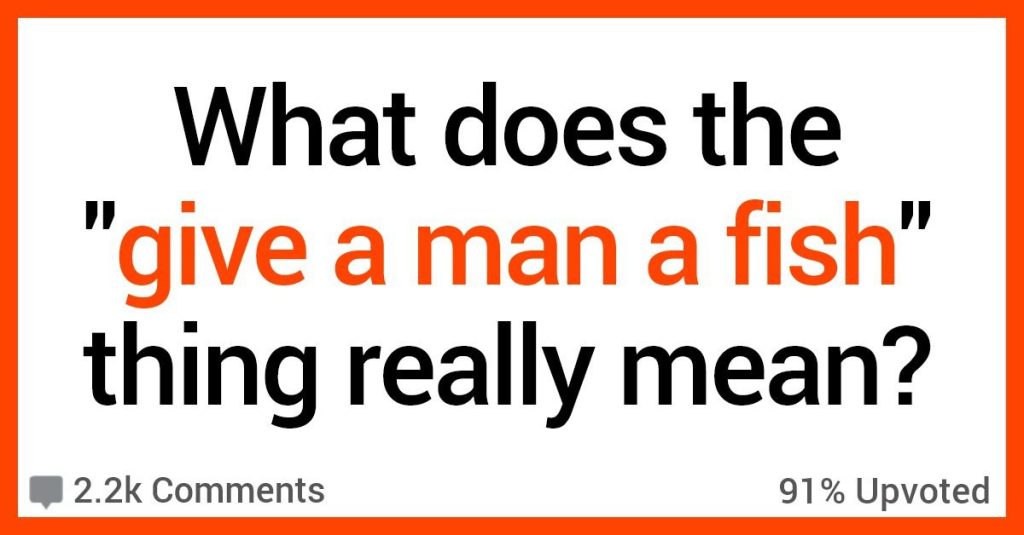 People Reveal What “Give a Man a Fish” Really Means

Feels like there are a lot of idioms out there that we just kind of accept and move on from without always diving into how they can be properly applied to our lives, or whether they’re even especially valid.

Take, for instance, the fish thing.

Can Reddit help us make sense of how it can be applied to the following areas?

Making sure your parents actually fix some of their tech problems themselves so that they don’t constantly badger you for help doing things like installing a web browser or finding an app on their phone.

Give a puppy a ball and she’s happy for a minute.

Teach a puppy to fetch a ball and she wants to play fetch all the time, any time you sit down, it never stops, OMG what have I done????

Chiropractic care vs. seeing a physician specializing in Musculoskeletal medicine who can counsel the patient on the importance of muscle balance, activity modification and the importance of compliance with home therapy programs.

Chiro adjustments undoubtedly help with pain, but if you don’t fix the underlying imbalance, then you’re just going to line the pockets of your chiropractor and never be satisfied.

The Socratic Method is about not giving the student the answer, but asking him enough questions to figure it out him- or herself.

People learn better when they arrive at the conclusion themselves, rather than just memorizing random facts with no context.

There’s tons of micro-finance schemes which do exactly this. Muhammad Yunus got a Nobel Peace Prize for setting up a bank (Grameen Bank) which primarily dealt in microloans to women in Bagladesh. Give them a microloan to buy two chickens. Those chickens will lay eggs and make other chickens which can be sold and buy more chickens and so on.

The loans have nil or minimal interest and are backed by eternal parties. Whilst the Kiva concept was that your money would help a lady in Fiji buy a loom, the money donated to Kiva never actually went to the final recipient. Local banks provided the loans and Kiva provided security on them

I’ve had a f**kton of people that have wanted to be apprentices. Most don’t last a week. But further than that….

Bread. Before even getting apprentices to peel stuff etc… I get them to make bread. Because bread. Once they’ve made the recipe a few times I get them to try and make a ‘flavour’ of their choice.

Typically they’ll use an ingredient with extra liquid, and not think about how that will affect the texture. But you let them go and do their thing.

It usually turns out completely s**t.. and then after you talk with them about what went right, what went wrong. How to change recipes on the fly while keeping things within the parameters of the expected outcome.

You can always teach. But you can never force people to learn. You can also not expect people to just know the outcome

This kind of speaks to the lack of survival/home skills a lot of us have.

It used to be that skills like darning socks, sewing, making jam and pickles, etc. was passed down through generations.

Now, we a) don’t have time and b) don’t learn these skills from our parents (unless maybe you were Mennonite/grew up on a farm).

It’s cheap and easy to buy new socks, and planned obsolescence means most technology has a short life. It’s sad because it just increases consumerism and waste, and we have lost certain fundamental life skills.

Basically teaching women breaks the cycle of poverty because as a parent they can then teach their children.

Work your a** off everyday following the Amazon warehouse rules, learn how to not die picking products, and Jeff Bezos will get to take a space trip.

I showed a guy from my office how to change the engine & cabin air filters for less than $25 with Amazon filters.

He’s been getting jabbed for $70 every 6 months x two cars by his oil change shop for a few years…. Instead of doing it for him, I made him do it.

It amazes me how many people get away with never cooking. Either they leave it to someone else or order out. Home cooking is healthier, cheaper, provides leftovers for days to come and can be a unique experience! Weird as it is, I find it fun to experiment with recipes and alter tastes.

And cooking doesn’t even have to be hard. It’s as simple as throwing something in the slow cooker while you’re at work or frying eggs over the stovetop!

13. The means of production

Give a man a fish, and you feed him for a day.

Offer him a fish a day to work for you for eight hours, then take him on your boat, show him the nets and sonar, teach him to use them and pull out 100 fishes a day, and give him one.

He will get all mad now because you taught him to fish and he can do it himself, then remind him he doesn’t own a boat and could never afford one on his measly one-fish-a-day salary.

Literally anything in the factory I work in.

Fix someone’s 40 year old machine, it will work for 30 mins before breaking again.

Teach the stupid motherf**ker how not to break it and it can go 1 hour before breaking again.

Me I’m the stupid motherf**ker.

I tried to use this idiom with a coworker once. She asked me to do something for her that she didn’t know how. I started showing her how to do it instead of just doing it and walking away. She asked me why I was trying to teach her and I started to say,

I changed the idiom to “give a woman a fish and you feed her for a day… ” when she cut me off again to say,

She also asked me for help once carrying a box of fairly light supplies to which I said “that looks like a one man job.” and she responded by putting them back and saying “if that’s the case why don’t you do it as one man?”

You know what I’ve always said: give a man a fish and you better be sure that’s something he wanted. Nothing weirder than an unsolicited fish.

What does this saying mean to you?