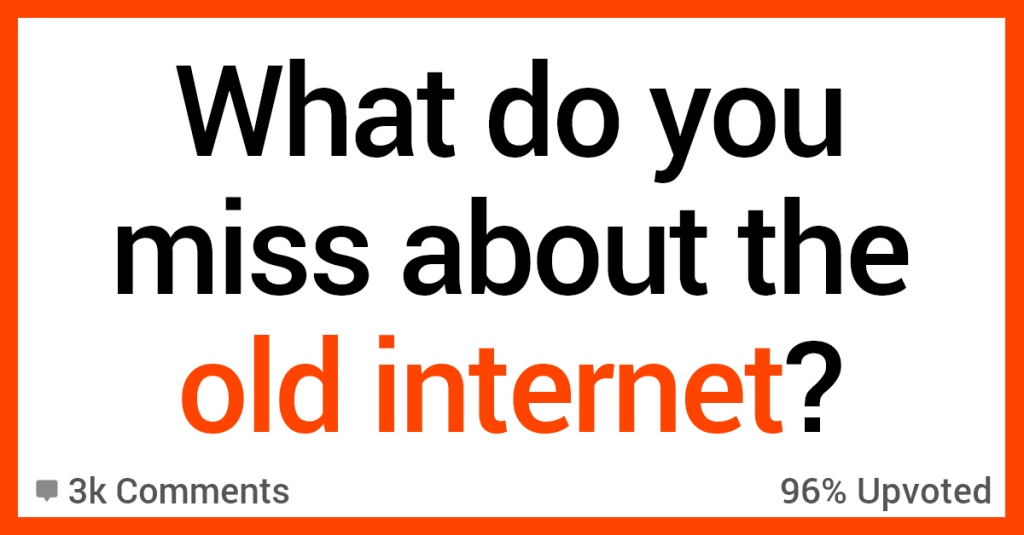 People Reveal What They Miss About the Old Internet

When I was a kid and people would talk about “the olden days,” I used to picture like, covered wagons and crap.

Now I remember a time when the world was less on fire and the internet was slower, and how one probably had a lot to do with the other.

What do you miss about the internet of the past? from AskReddit

Let’s take a bittersweet stroll down memory lane and see what the people of Reddit miss about the old internet.

1. They mystery of it all

The fact that it still felt like some kind of mystery we had to figure out, there was always another website or something that you didn’t know about, you could just kind of find new stuff every day and it felt like you were discovering something, it felt like a process of exploration!

Remember the time when yt had the 5 star rating system?

Also there weren’t a lot of youtubers that brought content on a regular base.

Instead there were a handful of videos everyone knew about.

Of course social media helped making noise for some big problems of today, but real-life interaction was pretty much killed by social media, at least here in Germany.

It feels very sanitised and clean. Like, there’s no mystery to it.

Not sure I’m getting my point across but yeah.

Also no one really had a clue what anyone what was doing which was really nice.

Now it is a machine that is being used to get more customers etcetera.

It was a weird place.

How it used to just be a part of life, and now it is life. Smartphones were probably the driving force here.

When I was younger I had to wait until I was home to get online, now it’s always in my palm, I use it to manage almost every aspect of life, and my attention span is fried.

I know you can still get on and play but it doesn’t feel the same anymore.

Maybe that’s more of a “youth and nostalgia” thing than an Internet itself thing, though.

In the late 90s, there used to be these awesome fansites for basically any kind of media you could think of. Comic book characters, celebs, TV shows, you name it, all created by mega-fans who would collect and curate fanfiction, fanart, quotes, poems, jokes, pictures, etc.

They were real labors of love and often had awesome content.

You could be friends with people online, without your irl family & friends demanding you friend them.

Now it’s Steam, Twitter, Insta, … everyone is everywhere and they demand your interaction as their own gamified self worth.

Just like random, high-concept comedy sites that you’d run across because people weren’t wasting all their jokes on twitter. Things that were impossibly funny at the time but long gone now.

“Once it’s on the internet it’s there forever” ….except for basically every website I used to read back in college.

When it wasn’t basically a corporate hellscape with an endless barrage of advertisements and relentless format copying. My company is making a product based solely on a tik tok trend. What’s cutting edge and boundary pushing about a supplement based on questionable science and even more dubious marketing research of “it’s trending, let’s see if it sticks”?

I miss when it was wild and amateur. People got famous, but it was from outrageous stuff that no one had thought of before.

As someone who’s been online since 1991, I remember the early days.

I miss the Internet that was dominated by tech-savvy geeks and nerds, and message boards that required effort to join and were moderated, as opposed to free-for-all social media platforms, like Facebook and Twitter.

Social media brought a buttload of idiots and a**holes onto the Internet. Sure, we had people like that before social media, but it wasn’t the norm (probably because it wasn’t generally tolerated on moderated message boards and getting online was too difficult/complicated for the average person).

One thing I definitely DON’T miss is paying huge fees per hour.

The information age was the ability for anyone to learn about anything. It may have been anarchic in the way information could be collected, but today it’s entirely possible to avoid ever seeing conflicting information.

You could go through many pages where there were some micro-communities.

No everybody stays on 10 top pages and custom made sites are made only for business. That sucks.

For better or worse, the culture was niche and hadn’t yet hit the mainstream.

Made everything feel so much more genuine and special.

Kinda makes ya yearn for the covered wagons, eh?

What do you miss about the old internet?