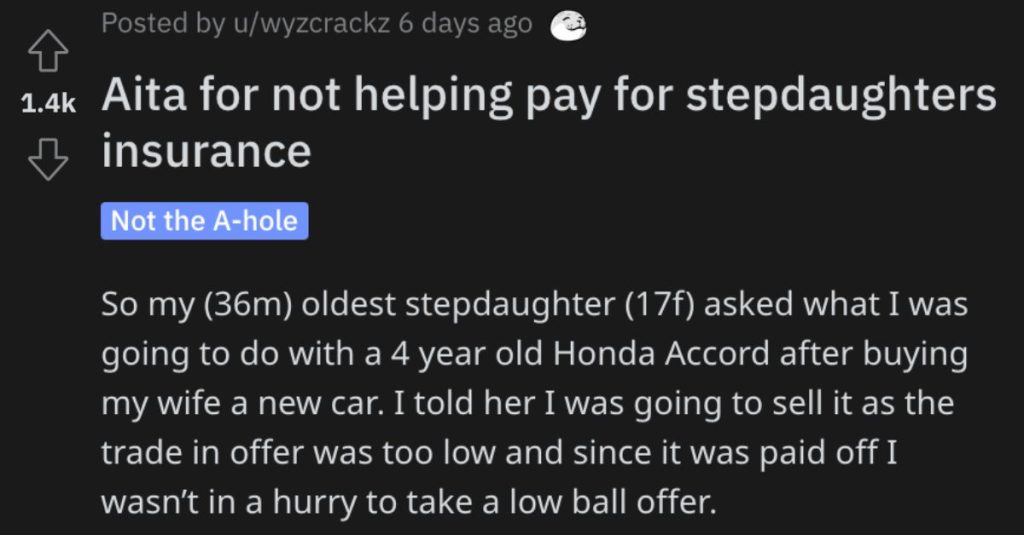 Teenagers and their cars, am I right?

Let’s just say that things can get a bit touchy when it comes to helping kids buy their first car…especially when there are other adults involved.

Take a look at this story from a stepdad who has just about had it with his stepdaughter and her father when it comes to getting the teen her first car.

AITA for not helping pay for stepdaughters insurance?

“So my (36m) oldest stepdaughter (17f) asked what I was going to do with a 4 year old Honda Accord after buying my wife a new car.

I told her I was going to sell it as the trade in offer was too low and since it was paid off I wasn’t in a hurry to take a low ball offer. She asked me if she could have it and I told her that she needed to arrange a sit down with her, I, her mother, and her father and we could talk about it.

Now I’m not saying that the Accord is a luxury vehicle but it had all the options, 30,000 miles and 4 years old, a much nicer vehicle than I would have gone out and bought for a teenager, but since I had it, I wasn’t going to sell it to buy her something else.

Well a few days later her dad calls me and asks how much I want for the car, I told him I wasn’t asking for any money for the car but I wanted him, my wife, and I to all be on the same page as far as rules for the car for my daughter.

Immediately after my daughter calls me and asks what the rules will be and the first one I said was I expect her to use this until she is out of school unless it breaks down.

This is only relevant because a few years earlier her phone broke and her dad refused to replace it so I bought her an iPhone 6, next year she wants an iPhone 7 and I told her no, that her mother and I get new phones every 3 years and she doesn’t need a new one. She complained to her dad who bought her a new phone, and I was stuck with an extra phone.

Well she tells me that her dad was going to buy her a new car in a year or so, so she would only use it for that long, and if that was unacceptable to me then I could go ahead and sell it, which I did for ~15k.

Fast forward a couple of weeks and she is driving a brand new Civic and her dad calls and asks me to pay for insurance. I tell him no.

He wanted to spit in my face and reject a great vehicle for no money, he wanted to be the big man for his daughter, he could pay for insurance.”

And here’s how people on Reddit responded to this story.

This reader said that this guy is not the a**hole by any stretch of the imagination. 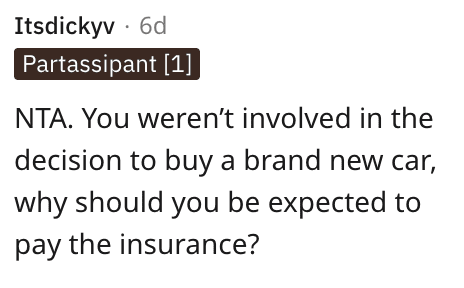 Another person said that the stepdaughter needs to take responsibility for paying for her own insurance. 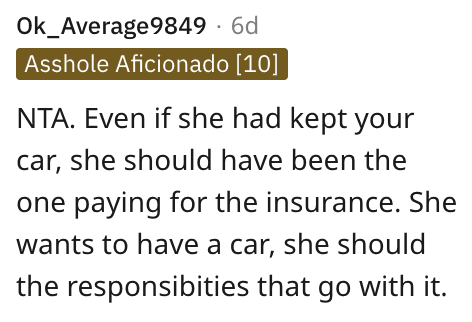 This individual argued that the stepdaughter is just being manipulative to all the adults in this story. 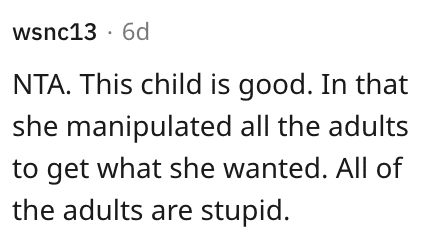 And finally, this reader said that the stepfather is not to blame in this story. 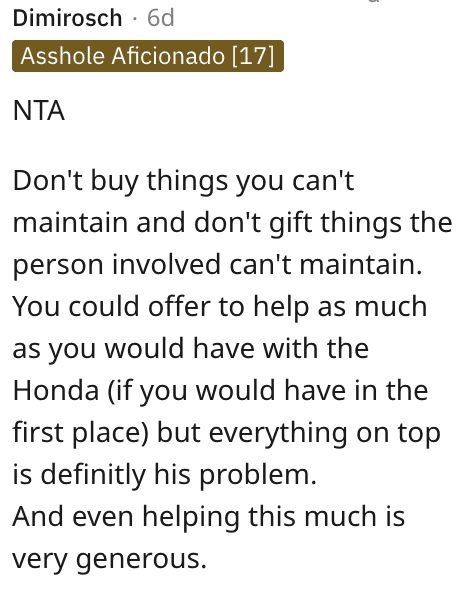