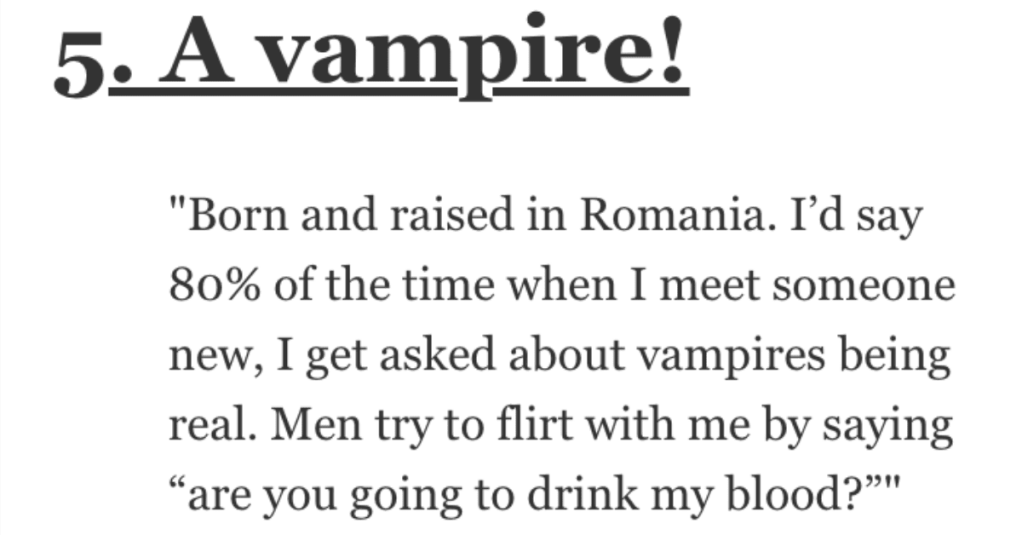 People Share Common Myths About Their Country That Are False

There are a ton of differnet myths out there about people from different parts of the world that it’s enough to make a person’s head spin.

And a lot of them aren’t true at all!

But still, people believe what they want to believe…until now, that is!

What myth about your country is false but people still believe it?

Here’s how people responded on AskReddit.

We are Czech Republic, not Czechoslovakia anymore.”

No, we’re not part of China. We’re not even in the same region. Yes, the population is 60% ethnically Chinese, but that doesn’t make us part of China any more than it makes the USA part of Britain. As a matter of fact, there’s a problem of racism against mainlander Chinese, since locals tend not to see them as “true” Singaporeans.

This is exacerbated by the fact that lots of mainlander Chinese are pretty pro-China (human rights violations and all), while the local Chinese don’t like China and the CCP very much. We’re closer culturally to Taiwan.

It is not illegal to be naked inside your own home. You can be starkers while bathing or f**king if you like. You just cannot use “I am in my own home” as a defense against streaking or showing everyone your rude bits. 90% of the population live in government apartments and we don’t need pervs flashing their dongs through their windows.

Incidentally, this law came about because pervs were flashing their dongs through their windows. Singapore used to have a big flasher problem back in the 80s – times were weird.

It is not illegal to chew gum, only to import/sell it or bring it onto the trains. This is because d**kheads used to literally gum up the train doors and make everyone late for work. The government put up with it for a few months and then said f**k it, no more gum for everyone, this is why we can’t have nice things.

The government doesn’t fine people for every little offense anymore. They used to, but enforcement has become lenient in the last two decades. Sadly, this means there’s a ton of litter where the streets used to be pristine. Still, you might not want to litter or spit right in front of a police officer.”

“The image most people outside of Europe have of Austria.

Do you really think that we are always wearing Lederhosen and Dirndl?

That we all are living in the Alps and that we yodel from one mountain-hill to another to stay in touch with our neighbours?”

“That Sweden is a socialist paradise.

It’s neither socialist, nor a paradise (though it is a nice country to live in except for the weather).”

“Born and raised in Romania.

I’d say 80% of the time when I meet someone new, I get asked about vampires being real.

Men try to flirt with me by saying “are you going to drink my blood?””

“Germany – That WII is a huge taboo topic and everybody just pretends it didn’t happen.

I’ve had multiple US exchange students here in Germany ask me, if I knew about Hitler and the Nazi regime, and apparently they expected me to go “Huh, what? No, please educate me about my own history.”

Apparently this stems from a misunderstanding about not being allowed to do a Nazi salute in Germany – which has a completely different reason.”

“That everyone in Japan works crazy hours and never has enough time or energy for things they want to do.

People on average work longer hours than mainland Europe sure, but work less hours than the US, so that’s BS.”

“I live in South Africa.

Many people still believe we have wild animals roaming around and s**t, and people living in huts, etc.

That does happen in certain parts of Africa but I live in the suburbs of Cape Town. We have better internet than some first world countries.”

“I feel like Russia is commonly hated especially lately (not that there are no reasons for that huh).

I have a strong feeling that people simultaneously think that Russia is a dangerous sh**hole and that we all love and support Putin and his government. Both of those things are not true.

Well, some parts of Russia are poor and I myself have friends from different places who have only 10-15k roubles monthly to spend ($150-200).

At the same time, even though I am pretty privileged being born and raised in Moscow in an upper middle class family, have a flat that I don’t need to pay rent/loan for (my husband’s family got it for free during the USSR period).

My very first job ever pays me enough money to spend on anything I want except for big purchases like a new iPhone or a car; I have a degree (not for free but for reasonable money ($2500 a year)); and last year our free healthcare literally saved my life (yeah I know, taxes, I pay them, nbd).

Small quality of life things we have: I haven’t used any cash in years, everything can be paid via Apple/Google/Samsung Pay, even in the smallest shops. Our delivery services are on point, I can order any groceries I want via an app and they will deliver them in 7-15 minutes.

Another QoL thing I forgot to mention: we have our own tech ecosystem made by Yandex that almost everybody here uses – it consists of a virtual assistant with a home pod, one subscription for music, movies and other bonuses, food delivery service, taxi aggregator, car-sharing service, etc, and everything with a cash back. They also develop autopilot electric cars.

About Putin: none of my friends support him. Most of the young people here want to emigrate to not have anything in common with him.

Most important part: Russia is full of culture. Literature, language, music, nature, food, people, their stories – it’s all amazing and deserves some love.”

“Everyone plays soccer and knows how to dance samba.

There are monkeys in the streets.

The capital is Rio de Janeiro.”

There’s a whole world of people in between! Some of us don’t even like football.

One of my friends DOESN’T EVEN DRINK TEA! Not sure why she’s my friend to be honest…”

That we don’t shower. We do, guys, we’re not in the 1700s anymore. Also that French women don’t shave.

I mean, there are some that don’t, but this has more to do with their personal choices and a general trend of having more and more women that don’t shave around the world than their Frenchness.

We do eat frogs and snails though.”

Temptation is there but the static shock wouldn’t be worth it.”

“Iceland was not named as part of some conspiracy to keep folks away from a good thing.

The name comes from the fact that early settlers arrived during summer and then suffered horrible losses of livestock and people once winter hit and icebergs were seen filling the fjords. It was more of a warning than anything, that this place sucked.

Greenland on the other hand was probably named as such to make it sound more hospitable.”

“Kenyans are all long-distance runners, live in huts, speak no English, and have pet wild animals. Ugh.

So here goes: The long-distance guys are mainly from one community/ tribe called the Kalenjin that’s about 15% of the population. Next, Kenya is still a developing nation with a lot of poverty, but there’s a lot of modern architecture.

Next, the country is rated 18 out of 100 on the English Proficiency Index. And lastly: you can apply for a special (and rarely-granted) permit for your bobcat named Babou, but keeping wildlife is not at all common.

And the Kenya Wildlife Service will conduct regular visits to ensure Babou isn’t being kept in Meowschwitz-like conditions.”

We are loud though…”

Many people believe we have vampires, but in my 700 years of living here, I haven’t even seen one.

I asked my mates back in the castle and they also haven’t seen any, and they’ve been around for longer than I.”

“People generally assume that when you’re from Belgium, you are French-speaking.

While a big part of the country is Francophone, the majority population is Flemish (Dutch-speaking).

I blame this on mostly 3 factors:

People mainly visiting Brussels (which is bilingual, but has a Francophone majority)

“Greece is not only beaches and Islands, we also have beautiful places for the winter.

Many mountains and mainland attractions.

Every corner have something interesting.”

“The myth is that everyone here is always d**nk on vodka and people all ride bears, play on balalaikas and dance the kazachok and that we’re either dr**k or mad.

While there IS a problem with al**holism, a lot of people don’t drink, especially not vodka.

Funnily enough, bears do appear, but VERY rarely. And the people that ride bears or have them as pets? They’re considered unusual by other Russians.

We dance the kazachok only ironically at this point lol

But, ushankas ARE great and warm, so people do wear them – not ALL of them though Also we’re not all superpeople.”

“All of our country is just weed and red districts.

Yes we have these things.. but the Netherlands has lots of culture!”

“That the Irish are the biggest d**nks in the world.

Completely false and mean as we’re only the second biggest drinker in the world but we hope to get first place next year.”

“Everyone drinks maple syrup, there are moose everywhere and we’re saying “sorry” all the time.”

“That we say “shrimp on the barbie”.

It was an ad campaign to appeal to Americans.

It was the most successful tourism campaign still to this day, but literally no one in Australia says that.”

“That Brazil is a huge tropical jungle in which people speak Spanish.

São Paulo for instance is a huge sprawling metropolis with as many inhabitants as New York and Los Angeles combined.

In some southern areas of the country it actually snows.

And we were a Portuguese colony, so we speak Portuguese.”

What myths about your country are not true?