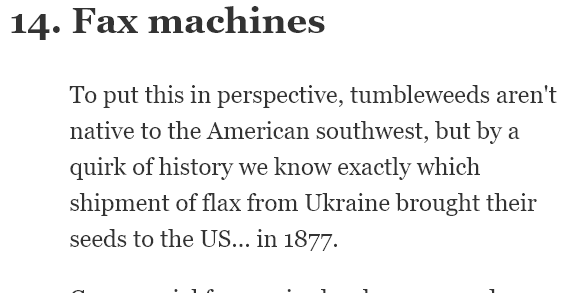 15 Things That are WAY Older Than We Think

Did you know that Betty White is older than sliced bread?

It’s true. Kinda. Obviously for as long as we’ve had bread and sharp things we’ve been cutting it, but commercially available pre-sliced bread didn’t come around until 1928.

What’s older than we think ? from AskReddit

Need more of that kind of nonsense? Reddit has the hookup.

Beer is thought to be older than bread.

It’s much easier to fill a jar with wheat and water, let it ferment, and brew beer than it is to grind grain, mix it, and bake it.

I was really surprised to discover when Oxford university was founded.

They don’t know the year for sure, but they know there was definitely teaching going on there in 1096.

The ancient Romans (well, the wealthy ones) had central heating in their homes.

You can actually still see the pipes in some of the buildings at Herculaneum!

It may only take 8 minutes for light to travel to earth from surface of the sun, but the light bounces around inside the sun for over 10000 years before it reaches the surface.

Roman law was so advanced that there are still large chunks of statutes (in civil law countries) taken pretty much directly from Roman codici written 1500-2000 years ago.

In common law countries, you find stuff like the Statute of Marlborough from the 1200s, still in effect. Along with still relevant case law from the 1700s.

The wealthiest of the ancient Minoans had very close to modern day plumbing.

The entire Minoan culture is really fascinating, not to mention their poor choice of clothing lol

While in college I discovered that my ol trusty pregame hypeman was born the same year as my dad. (I’m 30, for scale.)

Suddenly, snap yo fingers meant arthritic relief. The outlined struggles with dementia in out of your mind. Shots! of Metamucil. Turn down for, *cups ear* .. WHATTT??!!

Cardboard has been around since colonial times at least.

I learned this at the book makers shop in colonial Williamsburg a few years ago.

The Colosseum had a version of this called a velarium, which was a large awning that could be used to cover the seating areas and was controlled through a series of pulleys.

The Colosseum also had rudimentary elevators, used mostly to transport wild animals and scenery pieces from the storage areas to the arena floor.

The relationship of humans living with dogs (or some kind of domesticated wolf creature) dates back over 15,000 years.

Some of the earliest known fossils of Homo sapiens are found with dog bones.

Essentially, the bond between man and dog goes back farther than we can even document.

To put this in perspective, tumbleweeds aren’t native to the American southwest, but by a quirk of history we know exactly which shipment of flax from Ukraine brought their seeds to the US… in 1877.

Commercial fax service has been around longer than tumbleweeds in the American southwest.

I was shocked to learn that Oreos predate chocolate chip cookies, sliced bread, and my 100 year old Great Grandmother.

But we’d love to know if you have any other facts like this.

Leave them for us in the comments!