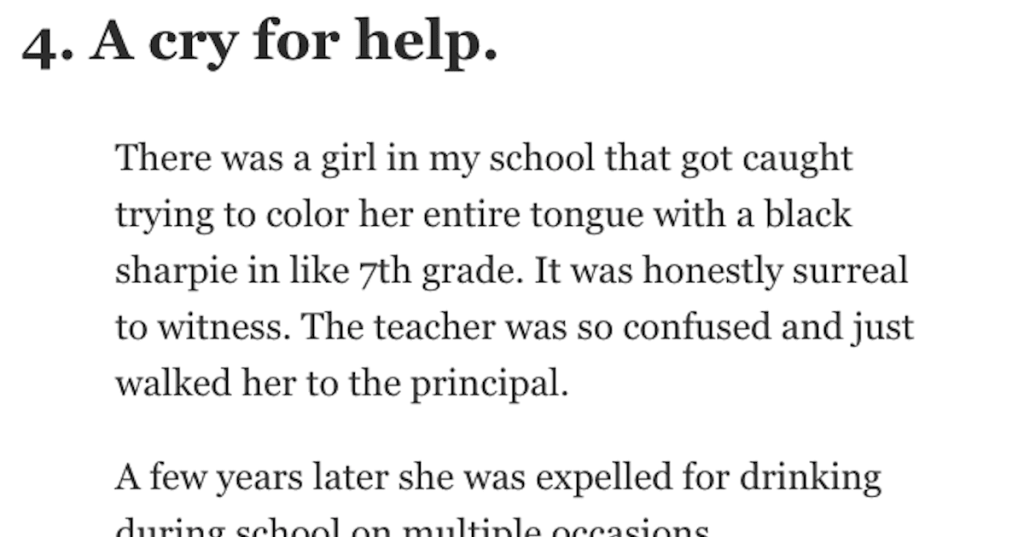 Whether you referred to that kid at your school as strange, odd, weird, different, or just a little off, every single person out there knows who I’m talking about, right?

They’re hard to forget, because they definitely march to the beat of their own drums – for better or worse.

These 17 people are recalling those people for us on Reddit, along with the event that cemented their reputation forever.

Ate a live lizard while the entire school was hanging out on the football field during a fire drill.

16. She was just practicing for the pandemic.

The weird kid at my school always claimed she was a wizard and when someone spoke to her when she was ” casting a spell ” ( screaming at the ground ) she would turn around and either scream in their face or bi*ch slap them.

I was new to the school at the time and I got screamed at cause I was legitimately worried that she might be hurt or something.

Set his arm on fire on a school trip to France. Sprayed his arm with deodorant for about a whole minute before getting someone to light it. It wouldn’t go out until he used the tap in the bathroom to douse it with water. He ended up with blisters and permanent scarring.

So the school trip ends and we go back to school the week after. All of a sudden me and 4 other kids get pulled into a classroom, to be questioned by police and the head teacher. He basically told his mum that we did it to him? Obviously this did not stick, as we all had the same story. If I had facebook I would look him up, see how life is for him nowadays.

There was this guy, kn class below me, who just ate everything.

Once he went to the front of the classroom where the sink thing is, took a big stack of paper towels back to his place and just started eating it mid-lesson.

Another time he drank a Capri Sun in class and when he was finished he just ate the package with straw and everything.

The weirder thing was when he ate a toy car the teacher brought to show something. He just sat in front of the teachers desk took the car from it and swallowed it without saying anything.

Dude would wear a storm trooper costume and taped an old flip-up phone to his arm and pretend to talk through it. This was in HS

He was particularly odd because he was like a born genius so he’d often get bored in class and get up to some weird shit.

He brought a live lobster to a middle school dance and let it go on the dance floor during the dance. Wasn’t even a question of “who would have done this?”

It was Nate, Nate did it…

11. Some things for should be secrets.

Got caught whackin’ it in the school bathroom. Then later got his dick stuck in a shampoo bottle.

Guys, if you get your d*ck stuck in a shampoo bottle, and your mom has to take you to the hospital to remedy the situation, you need to keep that to yourselves. There is no teenager in the world who’s going to keep that knowledge to themselves.

He thought he was a robot. Often you’d find him in the halls alone talking to electronics about destroying the human race or having a conversation with a locker.

He would put on sunglasses and stare at girls’ chests. It was obvious.

Finger themselves during class then brought a cake the next day to apologize.

7. I think he stole that name.

Dressed as a pirate every day for 8 years. Legit said he was leaving rural MI to move to the Caribbean and become a pirate… changed his name to blackbeard ryan…

Do a countdown to his farts like they were a f*cking moon launch.

Raised his hand and when the teacher called on him to answer his “question”, he started singing Frere Jacques.

There was a girl in my school that got caught trying to color her entire tongue with a black sharpie in like 7th grade. It was honestly surreal to witness. The teacher was so confused and just walked her to the principal.

A few years later she was expelled for drinking during school on multiple occasions.

3. This story just gets worse and worse.

Cut himself in class, waited for the blood to congeal a bit then ate it.

Just writing that made me gag.

Years later he got arrested for stabbing someone.

Pulled out his pubes or armpit hair one by one and ate them.

He had a notoriety for shitting his pants at least once a day and was super casual about it..I remember I was behind him in the hall one day when I saw a massive turd plop out of his short legs.

He looked back at it and just kept on strutting.

These tales just brought back so many memories, right?

Tell us the story of the different kid at your school – bonus points if it was you!