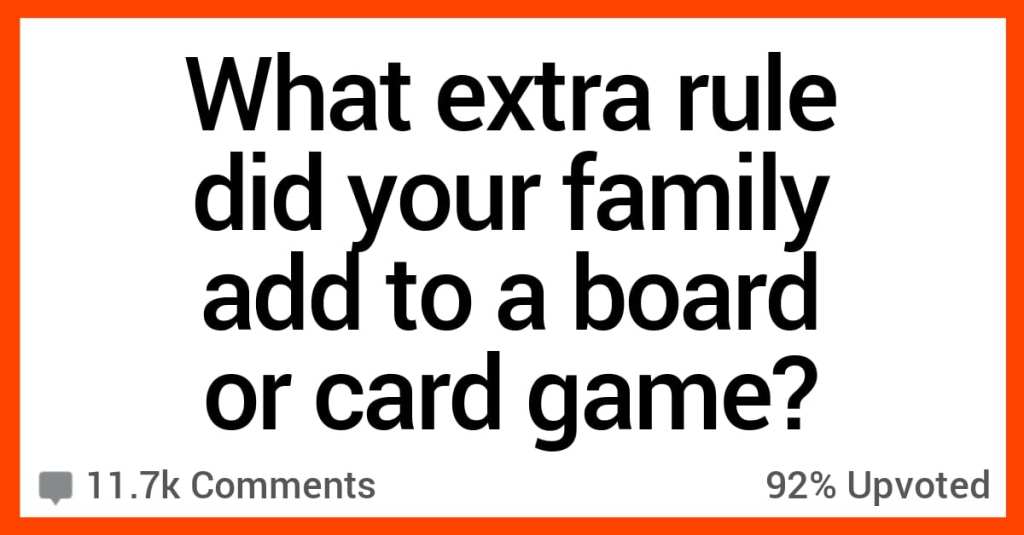 Wait a second…since when are you allowed to run another player’s car off the road in the game of Life? Calm down, calm down, I’m talking about Life, the board game.

But still, I don’t remember that specific rule being in the directions, do you?

AskReddit users shared the funny and strange extra rules their families made up for board games and card games.

“When my mother-in-law was suffering from dementia we would play Uno with her and just let her play any card she wanted to play.

She was at a point where she couldn’t follow the rules of the game but she did understand that she should put down a card when it was her turn.

So we just let her play whatever she wanted, it introduced a fun chaotic element to the game and she got to enjoy participating and spending time with us.”

“”The Mugging Rule” in Monopoly.

If I land on a space that you are currently occupying, I can choose to mug you.

We take turns rolling the dice, if I roll higher, I steal $100, if you roll higher I go to jail.”

“In Trivial Pursuit, we have a rule – if the player being asked doesn’t know the answer, they can ask the room.

The room doesn’t actually answer, but they say whether they know the answer or not. If nobody knows the answer, it’s considered an invalid question, and another card gets drawn instead. (if someone in the room does know, but the player being asked doesn’t, then it’s just a plain old “pass”)

My Dad knows a lot of stuff … I mean, a LOT. When he was a kid he read the Encyclopedia Britannica for fun. Basically, the rule was born from, “If even Dad doesn’t know the answer, then nobody does and it’s a terrible question.”

“At the end of Scrabble you make up a story with all the words on the board.

We never looked at the tiles for scores, we just played to get the best words on the board.”

“Literally ANYTHING goes in Monopoly.

Whatever business deals you make in Monopoly are valid, like paying some insurance each round so that if you land on their rent properties you are immune.”

If you roll three sixes when attacking you defeat every army on the territory you’re attacking into.

If you roll three ones, you nuke yourself and lose every army in the territory you’re attacking from.”

“If you say sorry while playing Uno, you pick up 2 cards!

Slap that +4 down with authority!

Also, if you have exactly the same card as the one that has just been played, you can jump in and play your duplicate regardless of if it’s your turn or not.”

8. Are you paying attention?

“In Catan, when you roll a 7 or play a knight, you have to move the robber.

but you can move it back to the desert and claim any resource you want from the “bank”.”

After a person has laid down, if their set has any wilds, other members are allowed to take the wilds as long as they provide the card the wild was representing.

You’re only allowed to do this if you can lay down in the same turn.”

“In high school, my group of friends loved to play Clue.

Unfortunately we found the game got a bit stale after a few nights of playing.

So, we actually designed our own board “extension”, containing additional rooms, and created new cards for extra weapons and characters so it was more challenging to determine who the killer was.”

“My sister and i play “Life Sucks”.

It’s Life but you only get paid if you land on payday, not if you just pass it.

Basically you end up with a pile of loans and it’s a struggle to get out of debt.”

“We have a generic version of Jenga that has the company name printed on one of the logs.

When someone pulls that log, they have to yell “kielbasa” in Fozzie Bear’s voice (keel-BA-sa).

It never gets old.”

When playing Cards Against Humanity, a random card is added by the phantom each round.

Surprisingly, the phantom frequently keeps up with us. It’s a lot of fun when everyone says “oh, that was the obvious best one” then realizes no one is claiming it.”

“Boggle: youngest child is allowed one and two letter words since she’s learning to read, and she’s allowed to have her sight-words list available for reference to help her practice them.

So far it’s working because she’s finding three and four letter words on her own!

Uno: stack draw 2s or draw 4s until you can’t no mo. Unfortunate soul that can’t stack draws all.

Beer pong: Gentleman’s rule. If the ball rolls back you fight to retrieve it. Winner gets a free shot. Trick shots must be very specific in nature because all loop holes are fair game.

Canasta: The Unicorn. All wilds canasta worth 2000 points. This causes table flips.”

Did your family have extra rules for board or card games?

We can’t wait to hear what you came up with!