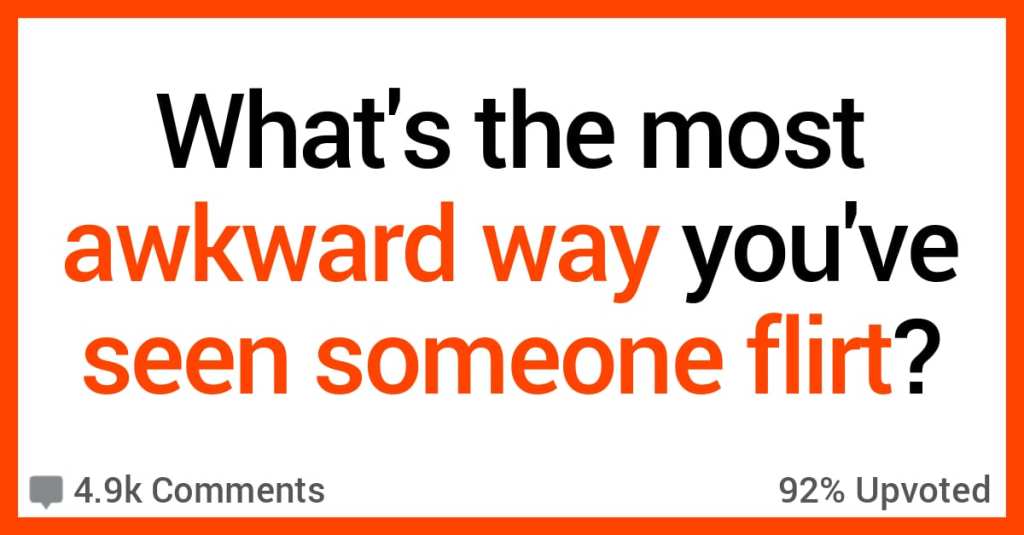 Do you know what EFO means?

I’ll tell you what it means: Embarrassment For Others.

It’s when you see something some awkward and cringeworthy that you get embarrassed for the person it’s happening to…who isn’t you, by the way.

And I personally get a lot of EFO when I see people try to flirt with each other.

“I bartend weddings at a resort and I was stuck next to the dance floor in a really small room a few weeks back. The bride and groom were precious but the people who attended were…wacky to say the least.

One gentleman in particular could probably compete and win a Michael Scott look and act alike contest. He was goofy, free spirited, but did the awkward stuff like push people out of their chairs to dance or (very poorly) do the worm.

Through the latter half of the night he was dancing with a younger woman, despite having a ring on his finger while her not so much. He would lean in for a kiss and she would slowly pull away awkwardly.

She pulled him out of the room a couple of times but they kept returning to the dance floor for their awkward slow dance and missed kisses. As the night progressed he kept trying and more frequently.

I never saw a kiss, only extreme awkwardness.”

“I had an account on OkCupid and a guy messaged me saying something to the effect of “you have a lazy eye, but it’s okay because you have a nice eye color. I got surgery to correct my lazy eye. I can work around your lazy eye. Message me back.”

Yeah, I didn’t message him back.”

“My ex and I were out bowling one time and I went to grab us beers.

I come back to a guy going into detail about his extreme fish collection and how she should check out his fish.”

“Was out with a couple of girlfriends this weekend. One guy proceeds to sit at our table.

Within five minutes his friend joined him (friend barely said a word). Guy 1 was quiet and mumbled and asked my girlfriends and I each at least 3 times what we did and then asked my friend if he could eat some of her food.

They lingered for like half an hour at least…it was weird.”

“The worst experience I ever encountered was at a Final Fantasy symphony orchestra concert in Atlanta.

This guy approached my sister and I wearing a large Squaresoft blazer and velcro shoes. It was the nerdiest thing I have ever witnessed. He proceeds to ask my sister what her favorite Final Fantasy song was. Then he uttered this gold.

“You remind me of Aeris. Can I be your Cloud?”

I walked away from that with an uncontrollable gut wrenching laughter and left my sister with that guy. Whenever I see her at holidays I always bring it up.”

“I kept running into this girl throughout the day.

Towards the end of the night, I saw her at a WaWa and so I said, “D**n girl, your nickname must be Visa, cause you’re everywhere I want to be”.

There was a store full of people to witness this. 2004 was a trying year for me.”

“At a previous job I overheard a guy hitting on one of my cubicle neighbors. It was his last day at the company so it seemed like his thought was “now or never man, gotta at least give it a shot!”

He comes over and awkwardly lets her know he has two tickets to an event, and wants to know if she’d want to join him and grab dinner while loudly and repeatedly blasting nervous fa**s the entire time he’s talking.

She tried to let him down easily, and I stared blankly at my monitor and used all of my strength to keep quiet. I felt bad for the dude, and more power to him for trying, but it makes for a funny mental image now.”

“I was at a party with some good friends. There was this guy there that I think was only invited out of pity. Poor guy.

Anyway, the party is going fine, people are in all the common rooms chatting and eating. The poor shmuck, we’ll call him Bryant, comes up to me and asks if I’ve seen his phone. “No” I say. He lost it he says. Can I call it he asks.

Alright, no biggie, I ask for the number and call it. I walk with him to the other room, which was the darkest most out of the way room in the house, and I hear it rigging. Bryant then proceeds to pull it out of his pocket and says “oh, I guess it was in my pocket the whole time.”

I begin to leave. He then, interrupting my stride, throws an arm around my shoulder and says, “well now you have my number”. “Yep” I say and proceed with haste out of the room.

I can see how he may have thought is was a good idea. It was not.”

All night she kept asking her friends to come up to me to dance with her. I was flattered but still said no.

At the end of the night she came up to me drunk and said “I’m really drunk right now. If you don’t go home with me tonight, I’m going to drive my car into a fu**ing tree tonight!”

That kind of made me cringe. I bought her a taxi ride home.”

“I was at a restaurant one night and one of the guys in our group thought the waitress was gorgeous. He would try to strike up a conversation with her whenever she came to the table but she wasn’t having any of it.

In a last ditch effort to impress her he asked for some extra napkins and after she dropped them at the table, he wrote his number on one and the folded it into an approximation of a rose. Then he walked up to her, while she was waiting on another table, and gave it to her.

He interrupted the customer that was in the middle of giving his order. Total d**k move. He was heartbroken when she never called him.”

“So I was at Burger King with my mom and little brother. Not a huge fan of Burger King so I asked her to get me a salad and I’d go find us a seat.

I go to the back corner area and grab a table and just sit and wait on my phone. Out of the corner of my eye I see this guy start scooching closer towards me. Eventually he’s about a table away. So suddenly he starts chatting with me and me being a socially awkward shy person I just sort of nod and stuff to what he’s saying.

Suddenly he turns the chatting into this weird flirty/cocky look-at-me sort of attitude. He starts telling me he was in the navy (no way he was either, he wasn’t even 18 yet) and he starts talking about prostitutes! Asian prostitutes that he met and hung out with on his Navy adventures. Starts hinting he’s not a virgin.

I’m super uncomfortable and trying to see where the F**K my mom was to end this conversation. She’s over with my brother smiling at me probably thinking I’m hooking up with this guy. Then he changes the subject to can I maybe text you sometime? I flat out said “no, I don’t have texting” (which was true) so he like throws his number that he apparently already had written down at me.

He then tells me to text him because he works at Walmart and can only afford texting, not calls. I’m like “uh…” And he like leaves in a dramatic floaty type of way. He sort if spun out of the booth. My mom finally comes over and wants all the “juicy” details and I tell her what happened. Her “happiness” of me possibly getting a date turns into hysterical laughter. It was one of the weirdest encounters ever.

Moral of the story: don’t tell a girl you slept with Asian prostitutes. It’s not impressive.”

“My aunt’s best friend’s son has had a HUGE crush on me since I was six years old. When we were 12 or 13, he proceeded to sing me ‘Hey There Delilah’ but switched it out with my name and sang it in front of my aunt’s family.

I still cringe when I think about that. And at my sweet 16, he made a twenty minute long speech about how important I was to him in front of all my friends, family, and my boyfriend at the time.”

Tell us about the most awkward time you’ve ever seen someone try to flirt.

We’d love to hear your stories in the comments!