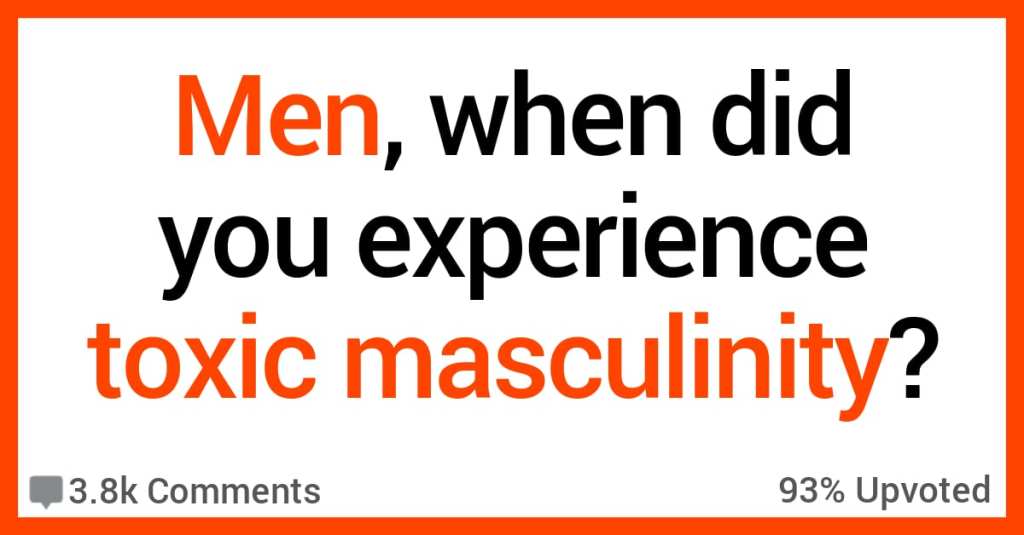 Guess what? Men can experience toxic masculinity, too.

It might not be as common as what women have to go through, but it really does happen.

And we’re about to hear some true stories about it.

“Getting made fun of for wearing life safety gear on job sites.

F**king idiots that can’t taste, smell or hear properly anymore because they’re too stubborn to put on earplugs and safety glasses, because it’s “not manly” to protect yourself apparently.”

“I’ve been called ‘gay’ for rescuing a starving kitten and taking it to the RSPCA.”

“Was at the weight room at high school and all the jocks saw me and they were making fun of me for trying to lift since I was a big boy back then.

When I say they were jocks, I mean muscles, tall, and hard-core abs. When I went to lift they kept on saying they couldn’t believe I was actually attempting to lift.

“The earliest I remember is when I was on my 1st grade basketball team. We got to select what jersey number we wanted to wear.

The coaches would ask everyone why they chose that number and most would list a famous NBA player (23 for MJ, 32 for Magic, etc.). I chose 14 because it was my aunts number, who was a D1 college player at the time.

When I told them this, the coaches laughed at me. Apparently looking up to a non-male athlete was frowned upon even though none of the coaches made it past high school.”

“My favorite color is purple.

Tried to wear purple and nope.

Too many dumba** comments.”

“Mainly how boys are raised to disregard pain and view emotions as a nuisance to be avoided and stifled.

It’s helpful for getting things done but not so good for being mentally healthy.”

“I paint my nails and hooooooo boy.

The amount of s**ist, ho**phobic, and downright ignorant comments I would get from people while at work astounded me.

“People act like I’m suspicious or dangerous when I travel alone with my daughter.

Every time I go out in public without her mother I get people watching me closely. I parked my car in a parking lot to feed her lunch a while back (didn’t want to take her inside due to COVID) and a group of people gawked and circled our vehicle in their truck a few times. That is not an uncommon experience for me.

I’m legitimately afraid to take her into a family bathroom because I fear some Karen is going to call the police and tell them I am doing something unspeakable because God forbid a man act like a nurturing parent in public. I’m scared I’m going to get a gun pulled on me in front of my daughter.

A lot of people assume that a lone man with a child or adjacent to children is a predator by default.

I am her parent and I’m every bit as capable at it as her mother. Me taking my child to the park and feeding her lunch isn’t “babysitting” just because I am doing it alone.”

“I remember in High School (I went to an all-boys school), I would go to watch my older sister play hockey, and I’d get made fun of.

I never understood what the problem with going to watch a women’s hockey game was, especially one where my older sister was playing.”

“Getting s**t on for not caring about sports.

I’m sorry, I just don’t want to spend my time watching men run around a field.

And no, I don’t want to play sports video games either.”

“A redneck fellow student in high school “joked” about how he should r**e me.

I was goth, so I guess it’s how he’d “show me” for being depressed and wearing makeup to school.”

“Growing up being called a flake by my father and not being late like either he meant the other kind of flake. I was destroyed by that ended up trying to prove myself to him. Even joined USMC to prove I wasn’t a flake.

The Marine Corps broke me down and built me back up. Graduating boot camp was the proudest I’ve ever seen my father. But inside I’m sad and lonely I’m a straight Caucasian male who enjoys dancing and dressing to the nines. I just followed the beat of my own drum and my father couldn’t understand that.

He ended up disowning me back in 1992. My father died in 2005 and I didn’t hear about it until 2015. What I’ve discovered is be yourself no matter what whoever says whatever that’s on them it’s their problem not yours just be who you want to be and just be the best you can be

What do you think are some more examples of toxic masculinity?