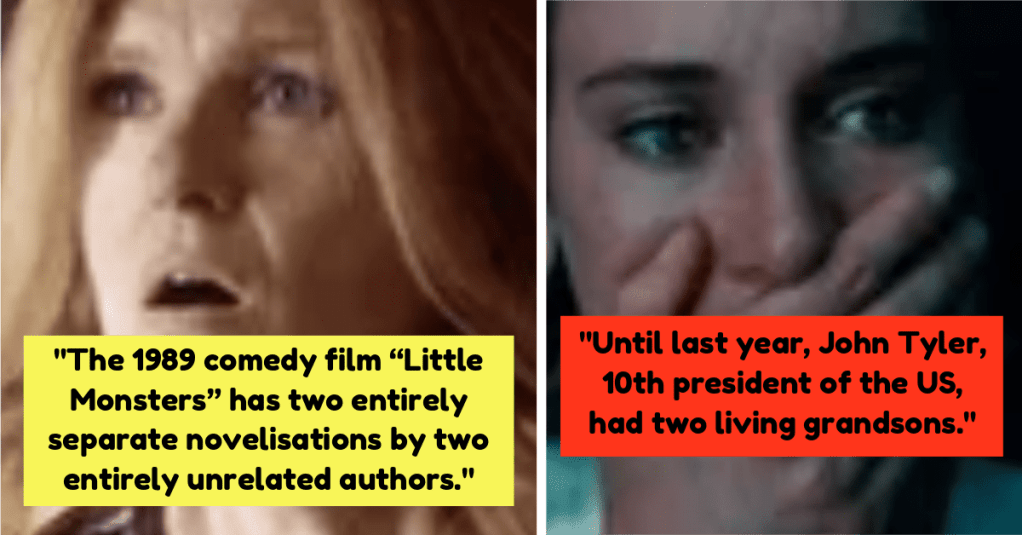 If you love useless trivia, you’re in for a big treat!

This thread on Reddit turned out to be an absolute goldmine of things that are sure to send you down an internet rabbit hole for the next several hours.

What’s the most ridiculous fact you know? from AskReddit

Full disclosure: we haven’t verified any of these, but the mere possibility has us googling like crazy.

A human body can produce enough carbon upon cremation to make 200 pencils.

You can be your own souvenir at your funeral.

Many Buddhist statues are Greek in origin.

Why? It all started with Alexander the Great. His empire was short lived, but it has left a lot of Greek influence in Asia and Africa (Coptic Christians in Egypt use an alphabet based on Greek in Church).

I don’t know why.

Do with this information what you will.

In the mid-1960’s a group of robbers used a surplus Finnish anti-tank gun with a homemade suppressor to punch a hole into the side of a vault at an armored car facility in NY state.

They stole almost half a million in valuables.

Almost all Koreans have a genetic mutation which causes them to not produce body odor.

Source: smelly AF American in Seoul. Riding the bus in summer after working out feels like sitting in a crowded library with your pants full of s**t.

When ancient people found bear skeletons they thought they were humanoid, decided they were demigod skeletons and reburied them with weapons and armour.

The horned lizard in general is ridiculous it’s first few lines of defense are normal. Camouflage, sharp horns, being faster than smaller prey the usual defenses. Then it will lift its tail to try and entice a predator to attack that before its head (which they usually will since it has much less armor) so that they can be yeeted away since it’s crazy easy to detach, and if all else fails it’ll jam it’s face into the predators mouth hoping it doesn’t bite down before firing blood from its eyes that tastes poisonous to freak out the predators and give them time to run away

Up until last year, John Tyler, born in 1790 and 10th president of the US, had two living grandsons.

Bananas are berries and technically they don’t grow on trees, it’s a herb that’s part of the lotus family Musaceae family in the Order Zingiberales (ginger-like plants).

Honey badgers have about 50 other species that they consider prey.

One of which is young honey badgers.

​They also can almost turn around completely in their skin, because it’s so loose, but also thick as f**k.

They regularly fight animals many times their size, lions, hyenas and have been known to f**king castrate water buffalo’s as an attack move.

I’m not sure, but I think they can also lay traps for prey.

Libyan dictator Muhammar Gadhafi had a crush on Condoleezza Rice and they found photo album full of her photos in his bedroom after he died.

There are 22 stars in the Paramount logo.

If you stand at the base of the clock tower in London commonly called Big Ben with a digital radio tuned to the BBC, you’ll hear the sound of the bell striking the hour via the radio before you hear it live.

In other words, sound travels faster digitally from the microphone in the tower to the BBC studio to their transmitter to your radio, than it does analogically from the bell to you.

Your intestines“know” how get back in the right place.

When doing abdominal surgery and the intestines need to be moved or rearranged, the doctor will just stuff them back in.

They will then wriggle back into place.

This is because it’s the world’s number two selling gin.

The world’s number one selling gin is a brand that is only sold in the Philippines, which sells so much that despite only selling in that country it outsells every other gin brand globally.

Mozart wrote the “Night Queen” aria so his sister-in-law could show off.

The piece is so good that it is included in a collection of music from Earth on both the Voyager 1 and Voyager 2 spacecraft.

18. Invasion of the Rabbits

Australia had rabbits (not previously inhabited) brought to the continent and due to no real predator present, the continent began to be taken over by rabbits.

There are now three rabbit fences that literally forced them into a corner of the continent.

I’ve remembered this since I had a Snapple over I dunno ten yrs ago.

Snapple fact 777: cat have two sets of vocal cords, one for meowing and one for purring.

Thank you for letting me get that out

Your eyes have a different immune system than the rest of your body.

If they knew about each other, your eyes would basically start dissolving, as your immune system attacks your own eyes.

Fear not, your brain won’t let that happen.

That when the Milky Way and Andromeda collide, even though the both have hundreds of billions of stars, the likelihood of any 2 stars colliding is astronomically low.

Everything is unimaginably far apart.

the singer of ‘Peanut Butter Jelly Time’ died in an 11 hour police standoff during which his brother-in-law, Snoop Dogg, attempted to calm him down and convince him to surrender.

The eruption of Mount Krakatoa was the loudest sound ever recorded.

Imagine an explosion so big in New York that Los Angeles hears it.

It produced seismic ripples through the earth that were picked up on devices, and showed that the ripples of the explosion circumnavigated the earth several times.

The decibels were so high at the point of the explosion that just the sound was lethal within a few miles and is a decibel level that liquifies solidified concrete.

A lot of the times, in ancient Egypt, scribes would use a logographic symbol after some words they wrote to clarify what they mean.

All Clownfish are Born male.

The Dominant Clown changes to female.

When the female dies the next dominant male steps up into motherhood.

Crisipo, The greatest figure of the Stoic philosophers in ancient Greece, died telling his own joke.

He saw a donkey eating some figs.

He Say, now give him a glass of wine to make it a complete meal.

He gave the donkey wine and got him drunk, he laughed so hard after that had a heart attack and died.

Jerry Parr was the Secret Service agent who grabbed President Ronald Reagan and threw him in the car when John Hinckley shot the President.

He covered Reagan with his body on the way to the hospital and is credited with heroically saving Reagan’s life.

The type they are is the first letter sideways on their back.

The spikes on the tail of the stegosaurus had no common name until The Far Side did a cartoon referencing it as the “Thagomizer” (after the late Thag Simmons).

The name stuck. That is really what it is called.

A mnemonic device for remembering the order of British peerage is Do Men Ever Visit Boston (Duke, Marquis, Earl, Viscount, Baron).

No, I’m not British and my knowledge of this is no more useful to me than British peerage is to the British.

What useless trivia do you know?