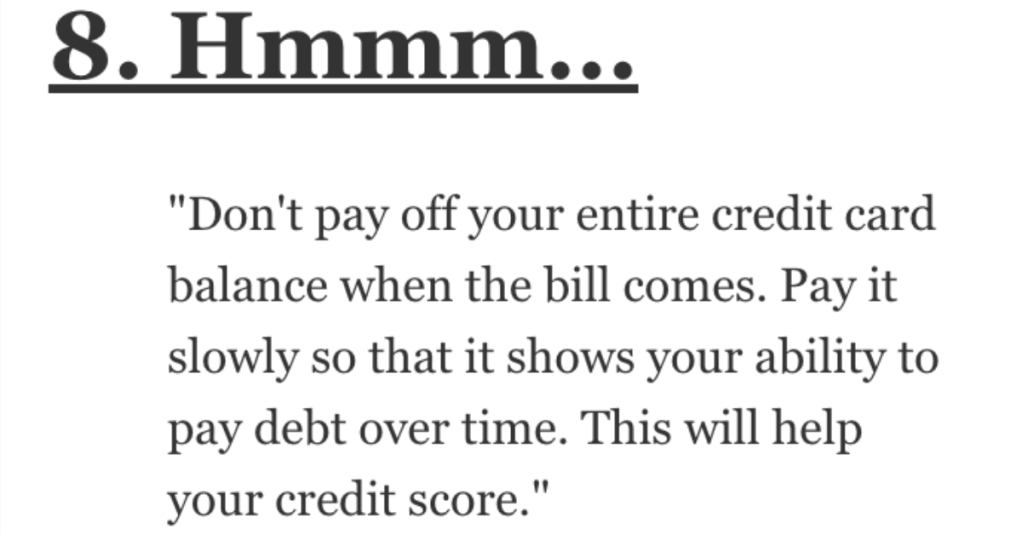 Bad financial advice can come from all sorts of folks, sometimes even from people who really believe that they have it all figured out when it comes to money.

But you always need to be wary and you need to do your homework when you get money advice from anyone, no matter who they are.

“To buy a house when they were giving them out like candy several years ago. I had bad credit and an unstable job, I said no way.

So many people were pressuring me. All those people lost their houses. Those balloon payments are no joke.”

“Recent terrible advice: I got hit while driving on a highway and have a crinkled in rear side fender and cracked tail light. I can still drive it, but who knows what damage is underneath.

My car is only 5 yrs old with maybe 60k miles, so it’s still a great car. Yet, my early 20s friend said I shouldn’t get insurance to fix it and instead just “pocket the deductible to save up for a down payment on another car”. Or maybe file the claim and pocket the money.

My deductible is $300, and I wasn’t at fault, so the other person’s insurance is likely going to pay my deductible. I just straight up cannot understand where he is coming from. Why wouldn’t I get the car fixed so I have a fully functional, reliable car? It’s, at most, $300. I just don’t understand.”

““If you can’t afford to pay back your student loans just ignore it. Can’t bleed a turnip…” – My father.

He followed it with something along the lines of “what’s the worse they can do to you?”

The answer… ALOT. They can do a lot to you.”

“My parents and grandparents keep pressuring me to quit my job because I’m pregnant. They think my husband’s job will sustain us and we’ll just have to penny-pinch a little more.

I don’t know if they realize that we all live in America. It will absolutely take both of our incomes to raise our child, especially since I’ll be taking 12 weeks of unpaid maternity leave in about a month.”

5. Never heard that before.

It’s a Filipino superstition that “saving” attracts an emergency. Do not save so that you don’t experience an emergency.

Being frugal is frowned upon. What happens if an emergency happens and they have no savings?

They “borrow” money from frugal people and if you say no to them because you know they spent their money on useless things they will say “you can not bring all your wealth to your grave”.

I choose the people who I lend/give money.

“Buy things to see the fruit of your labor”

When buying new expensive items, sometimes things they don’t really need. I have no problem on this if only they use this words once in a while but do it every paycheck is too much.

Then they will proceed to tell me buy stuff like them and not be frugal because you know, you can’t bring all those money to the grave so might as well use it immediately.”

“Several years ago, my company went under new management. They were going to have to pay us all of our remaining, unused PTO. I figured, great, I have a ton of PTO left, like $5000 worth. (I had A LOT of unused hours)

One of my colleagues said “YOU’RE going to be hit with taxes.” And she said it like “oh, you better be prepared. Don’t get excited, they’re going to tax the s**t out of you anyway so don’t expect much!”

Then, I was a manager of a call center. The call center agents made 12.00 an hour, but once I came in, I raised it to 15.50 an hour. One of them complained to me that this means her taxes are being raised and she’s earning less. She didn’t see the higher number on the bottom of her check for some reason.”

“Don’t pay off your entire credit card balance when the bill comes.

Pay it slowly so that it shows your ability to pay debt over time.

This will help your credit score.”

My used car I drove for multiple years without maintenance (aside from tires/oil) -> $3,000.”

“My husband and I were looking to sell our home and buy another and the realtor told us to put 99 dependents on our taxes so we make more. She said she had done it for years and it was fine.

We left pretty quickly after that.”

11. Doesn’t work for everyone.

“Take out a student loan.

You’ll be able to pay it back easy when you have a degree.”

““Don’t be a programmer. Your job will get outsourced to India.” – my dad when I told him excitedly as a teenager that I tried coding and loved it.

I ignored his advice and I’m now a programmer and still love it. Oh, and the pay is great too. I am now making a lot more than he ever did.”

She said, “the total price doesn’t matter because you make monthly payments.” I suddenly understood too well why she had always been so financially unstable.”

“A relative tried to recruit me into Amway.

He wound up stuck with a garage full of their products.”

“Yeah even if they’ve recently robbed you, you should still lend them the 500$ dollars they need to move to another city, they’re your family after all.

I don’t even know how mom married your dumb a**.”

“My FIL when I mention our retirement plan “I never contribute to my retirement account. Money now is always better than money later”.

I needed to have a conversation with my husband how we would NOT be supporting his mom and dad and their insane spending when they have no retirement plan and make huge financial mistakes on a weekly basis (good news is they both make good money).”

No real plan past that…”

I had a coworker that got pretty much everything there.

19. Burning a hole in your pocket.

““Spend it quickly or it’ll get stolen.”

Coming from someone with a history of losing and blowing their money.”

“That an emergency fund wasn’t necessary when you can always get a payday loan or use your credit card.

“One of my uncles once told me that I never really had to pay my phone bill.

He suggested that I simply jump to another carrier and let the first company cut you off.

His life has turned out exactly as you’d imagine.”

“”Once you cut up the credit card, you don’t have to pay it.”

My cousin is not doing so hot.

I’m pretty sure there are warrants out for his arrest in several states.”

“”Just get another credit card”.

From my friend who hasn’t worked in 3 years and is currently just vibing with his new credit cards he somehow got approved for.”

“So when I was 24, I was financially struggling. I had a job that worked me a LOT of hours, but only paid me $10 an hour.

My parents talked me into buying a BRAND NEW 2004 4-Door Honda Civic, the pre-interest price tag on it was about $25,000. A few weeks after getting it, my hours got regulated and it took one entire paycheck to make the monthly note on it – I could NOT afford the insurance on it.

I very quickly realized my parents were bad at money.”

In the comments, please tell us about the worst financial advice you’ve ever received.