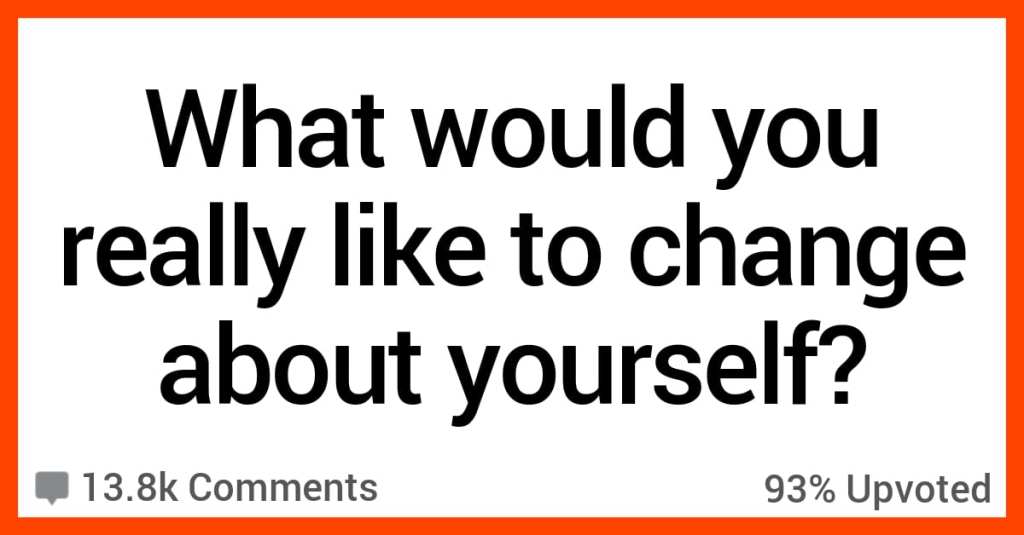 Think about yourself for a minute. There are certainly things about your personality that you would change, right?

That’s what this post is about. Admitting to ourselves the things that aren’t quite right… and hoping we can do something about it.

I feel like I am not enough and am incapable of being loved. I got bullied for years and every time I find someone I get interested in, they leave me.

I just want to be loved but nobody has given me that love.”

I’m way too blunt and come off as rude.

I just want to get the point across but I know there’s nice ways of saying things.”

“I don’t bring anything to the table.

All the things I do, my “hobbies”, don’t mean anything compared to others.

There are some people that are super talented and artistically expressing themselves to the world, but here I am, playing video games and online chess…”

I let one sh*tty thing ruin my entire day, I’m bad at telling the difference between a genuine compliment and a sarcastic remark so I’m usually defensive over nothing, when I feel abandoned or forgotten about I shut EVERYONE in my life out and ultimately make myself feel even more alone.

I make big decisions on a whim and don’t think about the consequences until it’s already too late, I genuinely don’t like people who are overly happy for no reason simply because I feel like they’re rubbing it in my face that I can’t feel that way.”

“I’m not a very honest person.

I try to be honest, but I don’t like hurting anyone’s feelings.

So sometimes it’s easier to lie.”

“I used to be very manipulative and have to actively choose not to do it.

I accepted that the toxic friend was in fact me.

“That I’ve unintentionally picked up a lot of my parents’ manipulative, mean hearted, irrational tendencies.

But I try to actively fight it.”

“I act weird or mean to drive people away.

Reasons vary from I don’t want to be abandoned to I get anxiety around new people.

I get angry easily but it only last for a very short amount of time.

Though it’s pure rage and honestly I imagine punching people.

Feels like one day I’ll just break and beat someone up horribly.”

“That I am a little b*tch that will rather whine about things than do something about it until the last moment.

That I put other’s mood down when I am not feeling well, that happens often(feel bipolar man).

That once everyone will leave me and I will be left with the mess I made of myself.

Will probably find someone else to blame then I guess.”

“I’m an addict. To weed–which seems like a joke compared to “actual” addicts of hard stuff. I’ve been trying to quit for 5 years but I keep coming back.

On the bright side I quit cigarettes, party drugs like shrooms and e, booze, and binge eating unhealthy food.

4/5 vices conquered is cool but I just have trouble admitting I’m struggling on the one that should have been easiest.”

Think about myself way more than I should.

I don’t take care of my body properly and I’m definitely not good at keeping my mental health in good condition.”

“I have a massive amount of anger and can be really mean if I’m not careful.

I was abused as a kid.

It’s not like I don’t know where the anger comes from, but I hate the ugliness of it.”

Is there anything about your life or personality that you’d like to change?