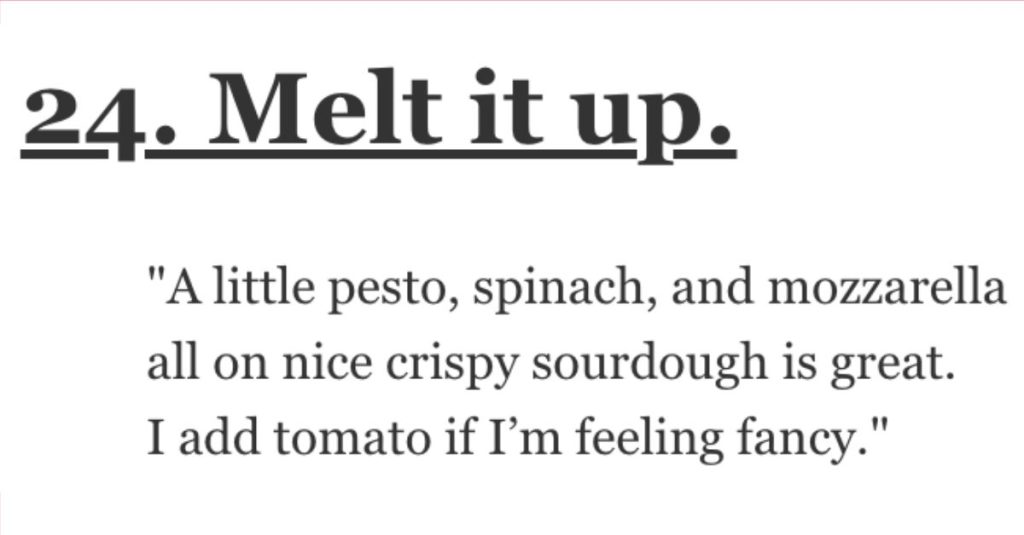 I have two meals that I can make in a hurry when I’m short on time…and I think they’re actually pretty tasty.

One of them is a black bean and cheese quesadilla with a little dollop of sour cream on the side.

And the other is a can of tuna fish with mayo, Crystal hot sauce, and a diced hard-boiled egg all mixed in.

And there you have it! Feel free to use those, brothers and sisters.

Hopefully you’ll get some good ideas!

Crack egg and put in the hole

Flip it after a bit

Add in equal amount of milk to soup(1 can of soup= 1 soup can of milk).

Save some of the noodles w/o cooking them and sprinkle them on top.”

4. Something to think about.

“The high protein campbells soups with some buttered toast is a great hot meal ready in 3 min though.

Or oatmeal made with milk and peanut butter.

OR, budget allowing, cottage cheese/yogurt with fruit and toppings, yum.”

I once read a food critic saying that professional chefs all think that tuna and cheese should never ever go together but if you sit in a diner late at night when all the chefs have long finished service and had a few drinks, they’re all eating tuna melts.

It’s the ultimate sandwich for me.”

Get some pork mince (or beef) crumble it into a hot wok with either vegetable oil or sesame oil and let it stir fry.

Meanwhile chop a red onion, a chili and some peanuts if you have them add them to the wok and continue to cook, mix in some soy sauce or oyster sauce or hosin sauce, whatever you have.

And then eat in lettuce leafs

It might take more than 5 minutes, but won’t take more than 6-7 minutes and its a bloody good meal, you want it to be fairly crunchy so dont need to worry too much about cooking out the onion and pork mince cooks very quickly.

Its my go too meal if i get back late from work.”

It makes me so happy.

I do salami, Turkey, ham 2 slices of cheddar cheese, mayo on all 3 slices, shredded lettuce and pepper.”

“Sharp cheddar in a sourdough sandwich, microwaved to warm the bread and just start the cheese melting.

Eaten over the sink. Why waste a plate?”

“Ramen and an egg, but not the traditional way.

Boil roughly half an inch of water (we want just enough water to boil the noodles, with very little water left over when it’s done boiling)

Smash up the ramen noodles, while still in the package (optional but cooks MUCH faster)

Open the package and remove the seasoning

Dump the noodles in

While boiling, crack an egg and whisk in a small bowl

Noodles should be done and almost all the water should be gone, if not strain out some.

Remove from the heat.

Slowly pour in the egg while mixing very quickly, try not to let the egg touch the pan.

Mix as much of the seasoning packet as you like (I prefer 1/2 – 3/4 because I usually add a salty component at the end.)

Add to bowl and top with some chives, thinly sliced, ripped up ham/salami and/or parsley. Leftover bacon or pancetta are fantastic crunchy components to dial up the texture.”

“Oatmeal with a nut butter mixed in while it’s still hot .

“A very simple recipe my grandma prepared for me when I was a kid.

It’s basically scrambled eggs…but before adding the egg she would cook sweetcorn (from a can) with a little bit of butter, add the eggs and then when the eggs were almost ready, add small cubes of cheese and cook for a minute or until the cheese start to melt(she was using fontal, but any swiss or white cheddar will do). Just a little black pepper and salt.

Takes 5 minutes to do but it’s absolutely delicious, fill you up, not so unhealthy and I feel my late grandma with me.

I tried variations with chives or spring onions, paprika or other stuff. Still good but nothing as good as a simple “uova strapazzate con mais e formaggio”.”

“Naan bread and a tub of hummus.

Hummus is such an underrated food. It goes well with a lot of veggies and breads and chips or heck even cheese.

All the time I hear hummus being listed as one of those weird, gross foods when its actually an amazing snack, or a meal if done correctly.

It’s not really unhealthy, either, especially if eaten with veggies (celery and carrots go great with hummus).”

I like the spinach ones from Trader Joe’s and progreso creamy tomato with basil.

It really makes a decent meal.”

Pick a broth, add (insert Asian dumpling here; mandu are good, but gyoza or wonton work too), add a fistful of fresh greens (spinach, arugula, cabbage, literally whatever you have on hand). Add hot sauce if you want it, a splash of soy if you have it, whatever you like in your broth.

Microwave three minutes; beat an egg while you do. Remove the soup from the microwave and drizzle in the egg very slowly. Congrats, you’ve hit most major dietary requirements and made a satisfying meal that’s as filling as you want it to be.

Peak tier for me is beef broth, a splash of dashi, a splash of soy sauce, a splash of mirin, a big spoon of sambal olek, about four or five mid-sized Chinese beef and vegetable dumplings, a fistful of baby spinach, and an egg.

Sometimes you have to microwave again for a minute if the egg ribbons don’t set.”

“I like to buy a rotisserie chicken and use it for a lot of things…I probably make Quesadillas 2-3 times a week. A little roast chicken and salsa to your cheese quesadilla and you have a real meal in the same amount of time.

The trick is to use butter in the pan and to cook it on medium-low until the insides get melty, and then raise the heat to medium and get your desired tortilla crispness.”

“PB&J, PB on a banana, or even quicker just a spoon full of peanut butter.

The added bonus of PB is that not only is it delicious, but it seems to do a great job of keeping off hunger for longer than many other equivalently sized options.”

Whack on some tomato paste, crushed garlic, red onion; and if I have it any cured meat (salami, ham, cold cooked chicken etc) and then shredded cheese.

Under a grill and BAM! Tortilla Pizza.”

You’ve got your carbs, proteins and a bit of fiber too!

Perfect balance between salty and sweet. Served me well in many occasions.”

“Spread a hot dog bun with peanut butter, and stick a peeled banana in there.

Peanut butter & banana sandwich without having to slice the banana for having the insides smoosh out when you take a bite.

Pro tip: PB on one half of the bun, Nutella on the other.”

“One can of black beans and one can of rotel tomatoes and chilies.

Dump both cans in a pot and heat for a couple of minutes. Then put some on a tortilla.

Add cheese if you want. Easy, filling, and pretty healthy.”

Tostitos Scoops and shredded Mexican cheese melted in the microwave, scoop of sour cream and some green Mrs. Renfros on the side.

Takes two minutes total including putting everything away.

One dirty plate and one dirty spoon to clean.”

Super quick and easy to make and there’s a ton of ingredients that you can add without much effort that will make it even better.”

“A little pesto, spinach, and mozzarella all on nice crispy sourdough is great.

“Egg sandwich lately for me:

-scramble two eggs in a bowl

-put them in a flat pan so they spread out

-flip one egg is cooked

-put cheese or whatever else you want (don’t forget salt and pepper!) on then close the egg up and put the bread together

-cut in half if you would like and enjoy!”

Remember to poke it with a fork to make holes to let the steam out, otherwise it might explode and make a mess in the microwave.

Pro tip, flip a microwave safe bowl upside down over it to make an improvised steamer.

4-5 minutes depending on size, then split and add toppings.”

I got that pre cooked bacon from Costco, rip each piece in half, then 45 seconds in the microwave and its all crispy how I like it, use those 45 seconds to put mayo and avocado on my bread, slice of pepper-jack and then lay the bacon out and done.

Get a large flour tortilla

Get a bag of shredded cheddar cheese

Cut up the hotdogs into smaller circles

Put the tortilla on a plate

Put a lot of shredded cheddar on the tortilla

Microwave long enough for the hot dogs to get hot and most of the cheese. Be sure to leave a large portion of the cheese in the middle unmelted to add to your depression

Fold the tortilla into a burrito

Eat the burrito that is as sad as you are.”

What are your favorite quick and easy meals?

Talk to us in the comments. Thanks a lot!