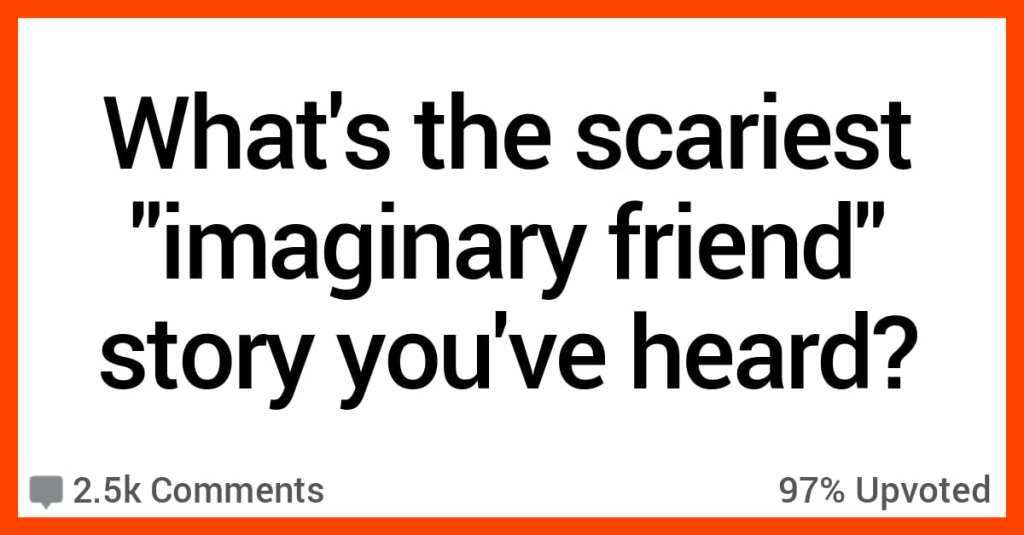 People Shared Stories About Kids and Their Creepy Imaginary Friends

I didn’t have an imaginary friend growing up (or now, thankfully), but one of my brothers did.

What does that say about him?

Is he special? Was he possessed? Should I still be scared of him even though we’re adults now?

It’s all a mystery…

“My youngest sister(4 at the time) had an imaginary friend named Paris Jaris.

My dad had built her a small playhouse in our backyard where my mom could see and hear her while she was in the kitchen. My sister would have tea parties and such with her imaginary friend. One day mom heard her say “don’t worry, as long as I’m alive they won’t hurt you”.

She paused and said “well if you do that then I can’t help you, it’s not nice to kill people”. When my mom asked her what that was about my sister said “sometimes I have to tell Paris to be a nice person or he can’t visit anymore”.

We moved not to long afterwards and she didn’t get a new playhouse.”

“Most of my extended family live around the same area so we have lot’s of gatherings.

For the backstory, one of my uncles (lets call him Steve) lost a childhood friend when he was ~7. Steve and his friend (let’s call him Jack) were having a play-date one after noon and got a bit dirty in some mud.

So Steve’s mother gave Jack a pair of Steve’s shoes to borrow. When Jack’s father came to pick him up after the play date they forgot to put back on Jack’s shoes and Jack accidentally got into the car with the borrowed shoes still on. Tragically the father and Jack got into a terrible car crash on the way home which killed 7-year old Jack. The family had him buried in the shoes he had borrowed from Steve. (i’m not sure why)

Fast forward 30 years to a family gathering in 2010. My 6 year old cousin Sara is playing alone with toys in a quieter room of the house. My Uncle Steve comes up to her and asks her what she is playing. Sara responds saying that she is playing with a friend.

Holding back a smile, Steve asks who her imaginary friend is. Sara continues to play while saying that she is playing with his friend Jack, and that “he is sorry he forgot to give your shoes back”. My Uncle’s jaw nearly dropped. He had not talked about Jack in years, let alone tell that story to a 6 year old.

No one had brought up Jack that day nor at any family gathering recently. Every time i remember this incident I get chills.”

“My when my cousin and I were kids she casually mentioned she had a “friend named Harold who lived in the picture frames.

Their entire hallways was lined with picture frames, and she would always hold her breath when she walked by them.

Anyway one day we were hanging out in their unfinished basement and she pointed to a beam in the far back corner and stated very bluntly that “That’s where Harold sleeps.””

“When my son was 3-4 he started talking about his wife.

He would say she was outside, and very sad.

I remember him putting his hand on his heart and saying he missed her, but we couldn’t let her in. She needed to move on.”

“My son has always talked about “the green lights that come visit him”.

Us: Oh, OK. Are they friendly?

4yr old: They don’t have mouths.

… Sometimes they go into your room.”

6. Where will the man live?

Apparently he would hear someone walking around in the attic when I wasn’t in there. He said he’d seen someone’s head poking out of the hatch watching him at night, and that he was sorry he’d been too scared to do anything about the man in my bedroom.

I no longer live with them. I was talking to the same brother (now aged 10) about him taking the bigger attic bedroom now it’s empty. My youngest brother (5) immediately answered, “but where will the man live?””

“My boss has a stepdaughter who likes to talk about her brother all the time and how he’s a bad boy who likes to play with fire.

She’s an only child…”

“My mom told me that when I was younger (maybe 3-4), I was looking out the window into the front yard laughing.

When she asked me what I was laughing at, I flat out said to her “the people dancing outside with no faces”.

Mom said she just kept looking ahead at the TV and acted as if she had never asked.”

“My coworker’s daughter told me that her imaginary friend “Lisa” said, “Good people die too. You’re good. Watch out.””

“I’ve mentioned this before, but my sister Ashley used to get visited at night by a dead girl with long dark hair and spider hands (yes, this predated The Ring, yes, I’m old AF).

She moved out the second she turned 18, never looked back.

20-odd years later, our half-brother Trevor moved into her old room. It wasn’t long after Trev started sleeping on the sofa, or with the lights on, and told us about his new “friend” that he didn’t like.

She was a dead girl who had long dark hair, an old nightgown, and spider hands.

Needless to say, none of us offered to trade rooms with him.”

“So this is actually my story of when I was a kid. I had an imaginary friend named Derek who was a carbon copy of me. We were completely identical.

I played with Derek for years, longer than what normal kids do. But he would always look at my mom and older sister with a sense of sadness. Eventually he went away. 23 years later im digging through my moms safe to grab some paperwork she’s kept for me and I see a stillborn death certificate for a boy named Derek who shared my birthday.

It was only then I found out I was actually a twin and my twin, Derek, died during birth. Creepy right?”

“Was taking my 3 year old niece for ice cream one evening. I strapped her into her car seat in the backseat.

As I started driving, my niece asks if Jacob (imaginary friend) could get an ice cream, too? I jokingly said, “Jacob can get his own ice cream.” I laughed, and said, “Just kidding – we’ll get Jacob an ice cream.” She didn’t respond so I looked in the rear view mirror.

I couldn’t see very much because it was dark. What I could see was my niece’s face. She looked angry and I was about to reassure her that I was kidding but I realized she wasn’t looking at me.

She was looking at something near my ear, towards the back of my head. Then she says, “I said NO, Jacob. Be nice. NO. She didn’t mean it.””

Do you have some creepy imaginary friend stories?