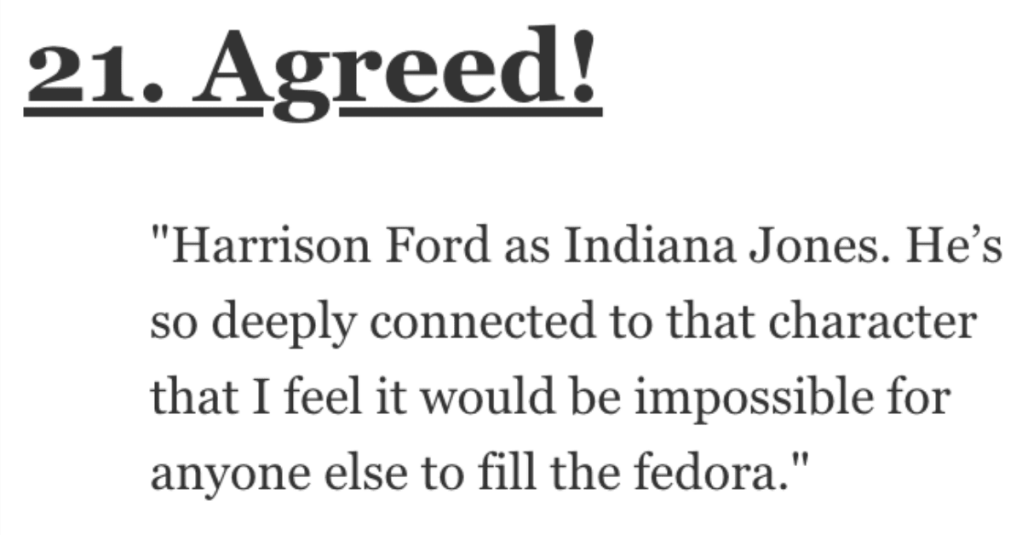 What roles do you think are so great by actors that you’ll never forget them?

I’ll rattle off a few that I think are great to get you going: Charlize Theron in Monster, Robert De Niro in Raging Bull, Sean Penn in Mystic River, Billy Bob Thornton in Sling Blade, Daniel Day-Lewis in…well, pretty much everything he’s done.

There are so many to consider!

Folks on AskReddit talked about the greatest acting roles they’ve ever seen.

It’s absolutely criminal that he never got an Emmy for that role. I still maintain that Dr. Cox is one of the most complex characters to ever appear on television. He’s a self-righteous, depressed, borderline al**holic jacka** who nonetheless feels an incredible sense of duty to his patients and the practice of medicine in general.

He thinks that he’s Superman, and simultaneously loves and despises that idea. Scrubs usually focuses on how much the younger cast like JD, Elliot, and Turk grow over the series, but if you look at Cox – the way he mentors JD, builds a successful relationship with Jordan, deals with the d**th of his best friend, and becomes a father – he grows just as much.

God I love that character.”

So good that I can actually hear her delivering lines from the book that I know never made it into the films,”have a biscuit Potter”.”

“Andre the Giant in The Princess Bride.

There is no way to remake that movie. It is magical.”

And Frank Drebin as Enrico Palatzzo.”

Best book to movie translation for a character I’ve ever seen.”

The Huey Lewis and the News scene is iconic.”

Every once in a while there’s a role that it seems like the actor was born to play.

There’s really not another role that compares in his career.”

There are so few actors out there that could be so funny with such an air of dignity about them.

The boat scene in Willy Wonka simply could not be pulled off by anyone else.”

Umbridge sucked in the books, but in the movies she turned Umbridge into a character that you just don’t like into one that you h**e with a burning passion.”

“Ah. Well… I attended Juilliard… I’m a graduate of the Harvard business school. I travel quite extensively. I lived through the Black Plague and had a pretty good time during that. I’ve seen the EXORCIST ABOUT A HUNDRED AND SIXTY-SEVEN TIMES, AND IT KEEPS GETTING FUNNIER EVERY SINGLE TIME I SEE IT.””

I’m pretty sure Machete was just a film crew following around Danny Trejo on a Tuesday.”

Anyone else in the role knows they never live up to that s**y god of a man.

‘I can make you a man’ is the most brilliant filthy scene to appear on cinema screens while people aren’t nude.”

“Christopher Lloyd as Doc in Back to the Future.

It’s the role he was born to play.”

Other characters I feel could be replaced quite easily. Tim Allen is obviously brilliant as Buzz, but it’s a pretty standard Captain Kirk inspired space captain performance. But I just can’t imagine Tom Hanks’ manic, neurotic Woody being played by anyone else.

It’s really impressive to see a screen actor do such a good job as a voice over too. A lot of them end up sucking, because cartoons require pretty big , exaggerated performances for them to work, and actors can seem to either do it or not.”

“Michael J. Fox as Marty McFly in Back to the Future.

They literally shot half of the movie with a different actor (Eric Stoltz) and it just wasn’t working.

They had to start shooting the movie over from the very beginning. It was a bet that definitely paid off, though.”

The best part of Alien and Aliens. The hero is a woman and no one cares.

Any man or woman would follow Ripley to the ends of the earth.”

“Arnold Schwarzenegger in The Terminator.

I particularly love the scene where she looks at Buffalo Bill’s victim and you hear her voice crack during the first part of the description, where she is looking at tiny personal details like painted fingernails, but then go clinical and determined when she sees the wounds on the girl’s back.

Playing bada** women often veers either towards emotionless and stalwart, or basically aping a 1980s action male role. Foster nailed the emotional vulnerability, ambition, and courage of that character in minute, but profound ways.

And everyone knew it would happen a decade before the first X-Men movie.”

He played that role so perfectly — cringy and naïve while still being likable enough to root for.”

He’s so deeply connected to that character that I feel it would be impossible for anyone else to fill the fedora.”

“Joaquin Phoenix as Commodus in Gladiator.

I have never h**ed a character so much till I saw him in that movie. He is so cowardly, despicable, and creepy.

Phoenix did such a good job in making you loathe his character.”

“Have you seen J.K. Simmons in Whiplash?

His performance in that movie is one of the most convincing that I’ve ever seen.”

He begins as sympathetic and ends up terrifying.”

I cannot envision any other person playing Loki.

And the way Tom talks and how much he cares about the character I don’t even want to imagine him played by anyone else.”

“Eli Wallach as Tuco in The Good, The Bad, and The Ugly.

The man should have been nominated for an Academy Award for his performance.”

I can’t imagine too many actors pulling off what she did. She not only convincingly played multiple characters that looked and felt like different people, but you could even tell when she was one of them disguised as another one of them.

What do you think is the best acting performance you’ve ever seen?