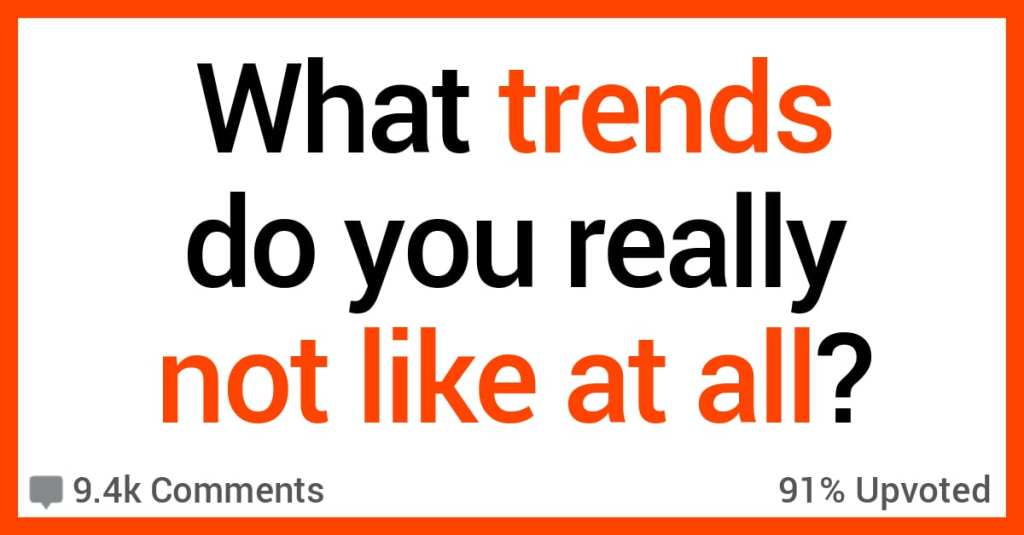 It really drives me insane and I don’t understand it at all.

And I don’t think it has anything to do with the fact that I’m a little bit older: sometimes I talk to people in their twenties and even they think the whole thing is ridiculous.

AskReddit users went on the record about the trends that they really can’t stand.

“I hate the trends of people just messing with strangers or doing tick tocks in the middle of streets.

It’s so f*cking annoying to be on the highway or a busy streets and two di*kheads in the road with a phone gripping at me for honking.”

Unless everyone is laughing in the end, it’s not funny.

There’s a special place in Hell for people that intentionally slap a slice of cheddar in their babies/pets’ face to harvest internet points.”

“True crime channels on Youtube that feature a dead/missing person’s face as the thumbnail next to the Youtuber looking s*xy and making a “shocked face”.”

“Twitter users starting they’re tweets with “can we stop pretending that [such and such] is a bad movie” or the endless “[really good movie that everyone knows is good] is such an underrated masterpiece”.

Just say what you want about the movie, stop trying to convince people that you’re the minority.”

Sorry let me be more specific, it’s not the gender reveal parties, it’s the idea that you need to go above and beyond to reveal your child’s gender.

People should keep it nice and simple, you don’t need to start a wildfire to reveal if your child is male or female.”

Their contribution to society is non existent. Everyone now thinks they can be an influencer too.

No one wants to really understand how scientific research and data works, but may use data out of context, or spread junk science to fit an agenda. Getting “information” through memes, instead of factual, detailed reports.

Cult mentalities in politics and ideologies. Disagree, question, challenge something? Get called a slur or a buzz word.

I’m not really pointing at a specific “side”. Liberal and conservatives are both guilty of it.”

Suddenly everyone has depressive episodes, dissociation, OCD, panic attacks, and it has done nothing to take away stigma. If anything, it’s made stigma worse. Because now I feel like I have to prove myself if I open up about my diagnosed issues.

I’m not a faker, I’m not a self-diagnoser who just wants attention. I’m a human trying to live with a seriously f*cked-up brain.

It’s always so fun when I mention one of my issues, they go “omg me too!!!!” and then treat me like a freak when I do something totally not Quirky RelatableTM.”

I just want to f*cking own things again.

Also, there are so many things that just don’t need to be subscription services, but people are still trying.”

“There was a Tiktok trend where you have your man go get a period product that doesn’t exist.

If someone is getting something for me from the store its rude and embarrassing to prank them like that and have them be so confused.”

“”Good vibes only” and “no haters” are both just sayings that people use to justify not listening to anyone who doesn’t praise them 100% for everything they do regardless of how stupid and or terrible their actions are.”

“People who talk on the phone on speaker.

Just put it to your d*mn ear like humanity has been doing since the dawn of time.”

“Censoring any older TV content that doesn’t meet 2021’s standards. Just slap a warning at the beginning and stop acting like it never happened.

I watched The Craft on TV the other night and every horrible thing Christine Taylor’s character said to Rochelle was cut. She goes from being a racist bully to just being a b*tch and it knocked the wind right out of the sails of that whole part of the story.

I’ve never seen a TV edit of The Craft have that much editing, especially on Channel 5.”

“I have noticed that girls (mostly reality stars and d lost stars) are going overboard with the plastic surgery.

First was of course the big lips and now I’m noticing everyone’s nose is getting smaller and smaller to the point it’s almost nonexistent.

They look beyond bizarre!”

In the comments, tell us about the trends that you really can’t stand.