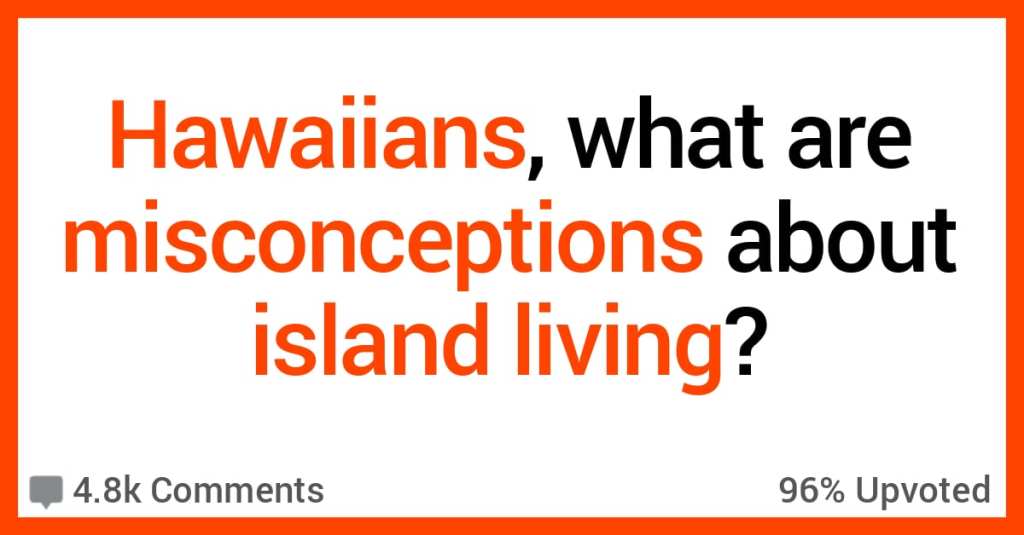 While Hawaii might look like a tropical paradise with no problems to us outsiders and mainlanders, I’m sure that, just like any other place in the world, there is a lot more than meets the eye.

All places have their problems and serious issues that folks from the outside just don’t understand. And that goes double for tourist destinations.

Let’s get a reality check from Hawaiians who took to AskReddit to talk about various misconceptions about living the island life.

“Life can often be very routine.

There’s less space to build new stuff so new developments are generally a much longer timeframe.

If you’re not comfortable going to the same two beaches, the same three restaurants and the same coffee shop on a regular basis, life can be very difficult here.”

“A major employer and source of residency is the US military.

Those of Japanese ancestry make up the second largest ethnicity.

“Dating is hard in Hawaii.

The population is small, and there is a joke that “people are waiting for someone to break up”.

I could see it being lonely there long term if you didn’t find someone quickly or move there with someone.”

“I was born and grew up on the mainland. My wife and I have lived in Hawaii (Maui) for almost a decade now.

It is definitely a lot more expensive to live here. 2 bags of groceries is generally in the $100 range. Rent is crazy. Gas is stupid expensive. The other end of that is that pay can be higher too, depending on the job.

If you get a good job serving somewhere fancy, it’s not uncommon to leave with $300-$500 for a shift. We depend completely on tourism here to survive. So as much as tourists can be annoying, intrusive, rude, and entitled, we need them. Distance is weird.

If I’m gonna drive 30 minutes somewhere, we better be having a whole day planned. Eating out somewhere casual is at least $30 for two people.”

About half of all households are unable to afford basic food, shelter, and healthcare. This is often masked by many families living together in multi-generational households. Importing food, energy, and goods through the 20th century has created an unsustainable dependency that has driven up the cost of living for Hawaii’s 1.4m residents.

Outside pressure from speculators drives up the cost of land and housing. Military and federal personnel make up a notable portion of the population, but often overlooked are their cola and housing allowances that massively distort the rental market. Tens of thousands of airbnb and vacation rentals take additional units out of long term housing exacerbating the housing shortage and increasing costs.

Add to that many who buy up second and third vacation homes, and many foreigners parking money in condos and real estate that all sit empty most of the time.

Because of our somewhat isolated job market, competition is limited and wages tend to be lower for many professions compared to their mainland counterparts. For example, I just passed a law a few years ago that prohibited tech companies from requiring employees to sign non-compete agreements that essentially barred them from working for other competitors. An independent study afterward found without those draconian controls tech sector wages increased by 4% as a result.

But despite these challenges we are making progress. We have among the best access to healthcare, life expectancy, and quality of life. The digital and film industry is taking off, and remote work is opening up massive new economic opportunity.

We’ve tripled our renewable energy in the last decade and are on our way to 100% clean energy and a carbon-neutral economy by 2045. We’re growing brand new niche industries like farm to bar chocolate production which no other state has yet done. We’re expanding local agriculture and tackling food sustainability.

At its peak Hawai’i supported a thriving population before western contact, 100% sustainably. We host more unique and endangered species and ecosystems than any other state, and in some cases than the rest of the country combined.

At 1.4 million people living with limited space and resources, Hawai’i is the perfect model to prove to the rest of the world that we can all live together sustainably with a longer and better quality of life than anyone thought possible. And for our kids’ sake we hope to prove it.”

“After living on the Big Island for 12 years now, I can say it is not always the vision of “living in paradise” that my friends and family keep presuming it is.

My family discredits any struggle I have because I am “in paradise”. Many of us are still struggling despite the “beautiful beaches”…even more so with Covid and the lack of jobs. So many of my friends, and extended family, cannot even afford food, let alone their rent/house payment since this pandemic.

And let us not even discuss how expense it is to BUY a house here! The cost of living here is astronomical, and if you live on a neighboring island to Oahu, you most likely lack proper medical facilities as well…

Many live multiple-families/generations in one home just to be able to survive. Many more work several jobs, just to keep a roof over their head and food on the table.

Yes, it is beautiful. Yes, we are graced with incredible views (when we drive to see them), and yes, we are thankful for what we have…but please do not ever think that it is just a fantasy island we live on. As we all have our burdens to carry.

If you are one of the fortunate who move here when you retire, and already have incredible assets…than this really is paradise!!

If you are from here, or relocated at a young age, have families to support, or otherwise…well, it is a high price to pay, and much sacrifice for so many, for those beaches and views…”

How expensive everything is is definitely at the top of the list. The one that most people don’t expect is that I had a hard time making friends. I’m guessing this could be hard in any tourism based place but I’d go to the restaurant or bar and meet tons of people. They were all there for the week.

It seems that even residents my age were all only there for a short timeframe as well. I just had a constantly rotating group of friends and it got old. That’s part of the reason I moved back to the mainland. Also everyone was always stealing stuff. Mopeds and other goods get stolen all day every day if it’s not locked, it’s gone.

It was frustrating the amount of stuff that would just go missing or get broken into.”

“Being called a haole can be derogatory or neutral depending on how it’s used. I’m a white woman married to a brown man.

Once, we were having dinner out while I was pregnant and our server told us we were going to have the cutest hapa-haole baby. She was pretty nice and I’m pretty sure she said it completely innocuously. Another time I was visiting the Big Island (I lived on Oahu) and was checking out an off-the-beaten-road beach that belonged exclusively to the locals.

It was crystal clear that I wasn’t welcome, and though they never called me it to my face, I heard them call me a haole amongst themselves and it definitely wasn’t neutral.

When I first moved to Oahu, my husband’s employer hosted us for a dinner party with some of his new co-workers. Another white dude who had lived there for about 20 years pulled me aside and told me point-blank that I should expect to be called a haole and not to let it bother me.

That I was a white person from the mainland in their space – it was my trade off. Broadly speaking, it wasn’t really an issue while I lived there. Most people were really nice as long as you weren’t acting like a self-entitled d*ck.”

“There are a LOT of homeless people.

One reason why? The job market relies a lot off of tourism and military. And it’s very expensive to live there – it’s also very expensive to leave. If you move to Moloka’i, and lose your job, where’re you going to go but under a bridge somewhere?

It costs way too much to leave since the only way to leave is by plane or boat and people can’t exactly stowaway on them easily.”

“Many people who live here are treated as second class citizens by the tourism industry.

Sure, it provides jobs, it’s a very important part. But how would YOU feel if you had people wanting to build a play park on a cemetery where your ancestors were buried? If you say “Build it somewhere else”, they will always ask you the same question: “Where?”. And what’s the answer? Well, there probably isn’t.

It’s a real Zero Sum game, because if you want to build something, you’ll probably end up evicting someone else.”

“Lived in Honolulu for four years. People tend to think of Hawaii as a peaceful, laid back place but really it’s a f*cking madhouse.

I also lived in Florida for five years and I always tell people that Hawaii really is what people only think Florida is. I’ve shared many stories on Reddit over the years of the endless string of lunatics and crazies I dealt with on nearly a daily basis out there.

There’s something about being on a remote island in the middle of nowhere that really brings out the loony in people.”

“Born and raised on the Big Island, live in California now.

I can only speak to my own experience in the town I grew up in, on the island I grew up on, but it’s a pretty d*mned normal life, just happens to be in a very beautiful and unique place.

Like any other tourist destination, the vast majority of visitors only see what’s on the path of the “guided tour” so to speak. When you peel back that curtain, you just see people living their lives like anywhere else.”

Are there any more Hawaiians out there who can tell us what island life is like?

And what some other misconceptions are about living there?

If you fit the bill, please share your thoughts with us in the comments.