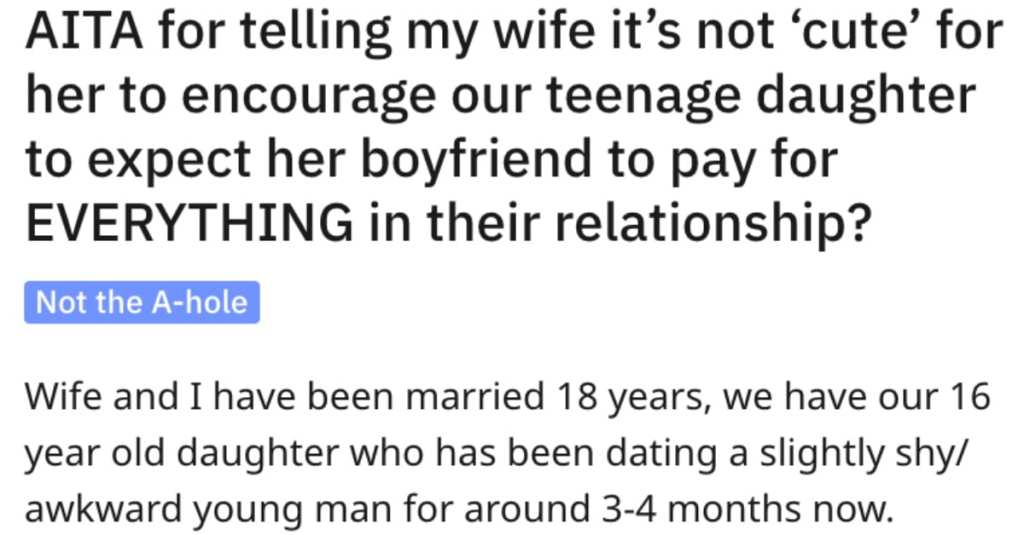 Was It Wrong to Tell My Wife Not to Encourage Our Teenage Daughter to Expect Her Boyfriend to Pay for Everything? People Responded.

Well, maybe that’s a bit of an exaggeration, but based on what you’re about to read, chivalry could be on the ropes.

Or at least what some folks think of as chivalry, aka “the guy always pays for everything.”

Hey, to each their own, I guess…

But this father clearly has some issues with the whole thing.

Here’s what the guy shared on Reddit’s “Am I the *sshole” page.

AITA for telling my wife it’s not ‘cute’ for her to encourage our teenage daughter to expect her boyfriend to pay for EVERYTHING in their relationship?

“Wife and I have been married 18 years, we have our 16 year old daughter who has been dating a slightly shy/ awkward young man for around 3-4 months now.

He seems very nervous around my daughter and has admitted in a passing comment here and there to my wife and I that he can’t believe she agreed to date him and he thinks she’s way out of his league. He seems very respectful, just shy.

My wife is usually an independent, awesome woman and her ideals align closely with mine particularly in term of feminism and equality. We have both striven to raise our daughter to be as independent and capable as possible.

Since my daughter has been dating this kid my wife has changed considerably and has given our daughter advice that has left me with raised brows more than once.

Some of the advice I’ve heard my wife give is ‘oh it’s cute for boys to pay for everything, especially in your first relationship!’ Or ‘oh honey don’t worry about that, he can pay for you, if he really liked you he would’ and similar.

I’ve tried to balance this out by telling my daughter straight away ‘two people in a partnership should be contributing equally’ and my personal favorite ‘if someone asks if they can take you out to dinner, it’s reasonable to expect them to pay, but if someone asks you to grab dinner with them, it’s reasonable to split the payment’. I figured that would be an easy way for a young person to understand the difference.

However I’ve noticed my daughter becoming more and more entitled with her boyfriends money. They haven’t been anywhere obviously since we’re home but the way she talks about him ‘oh I’ll just ask him to pay for x’ etc leaves a bad taste in my mouth.

She has also flippantly bragged/ mentioned that she gets him to buy gift cards for her etc by mentioning her mother’s advice, i.e. ‘if you really liked me you’d pay for x’

I spoke to my wife privately and told her my concerns, she insists it’s a rite of passage for girls and it’s cute that she should feel a guy is completely spoiling her.

I told her that it’s not cute for her to be thinking it’s acceptable to view relationships as personal ATMS, and my wife became very angry with me and is now calling me an *sshole with a lot of hostility.”

Here’s how people on Reddit responded to his story.

This person was as clear as day: it’s not cute and the man’s wife is to blame. 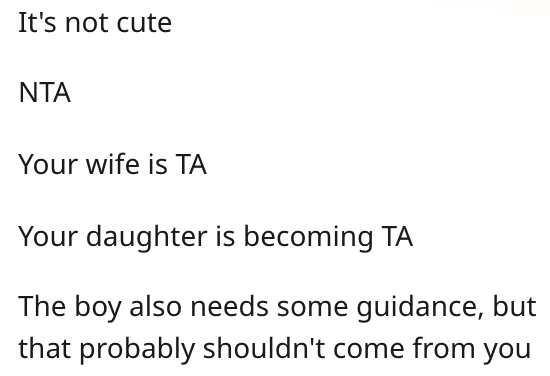 A woman weighed in with her own opinion and she made a very good point about the overall attitude toward paying for dates. 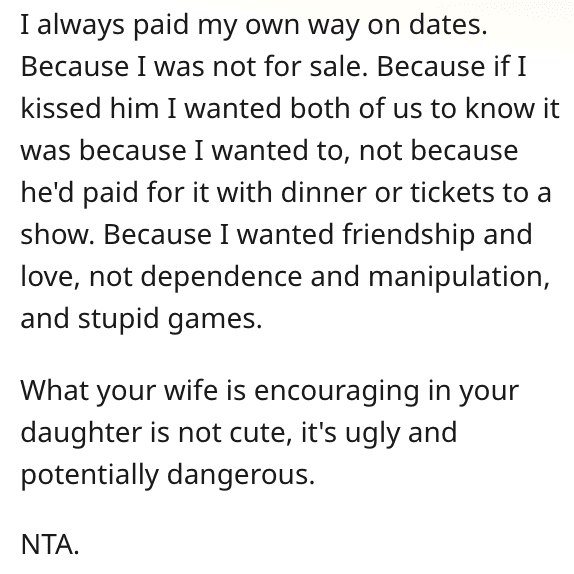 And then another person made a good point about thinking about if the shoe was on the other foot.

Maybe this whole thing is a little bit outdated…? 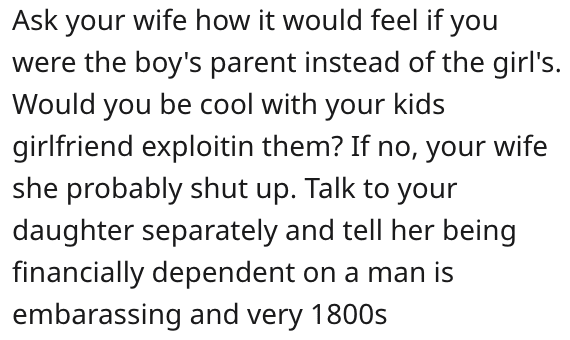 This person was short and blunt with their thoughts.

But another Reddit user made a good point about how times have changed and maybe the mother in this story is just feeling nostalgic for the old days. 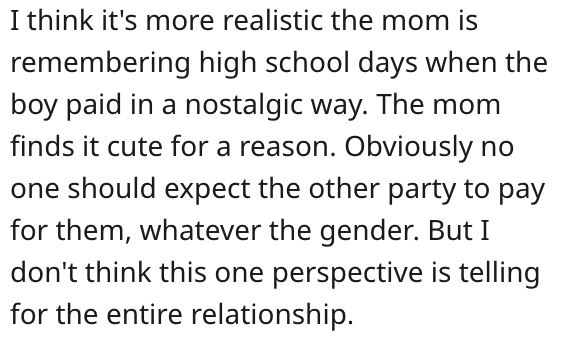 And, finally, someone talked about how the mentality that men should spoil women all the time is still out there and that a big part of it comes from immaturity. 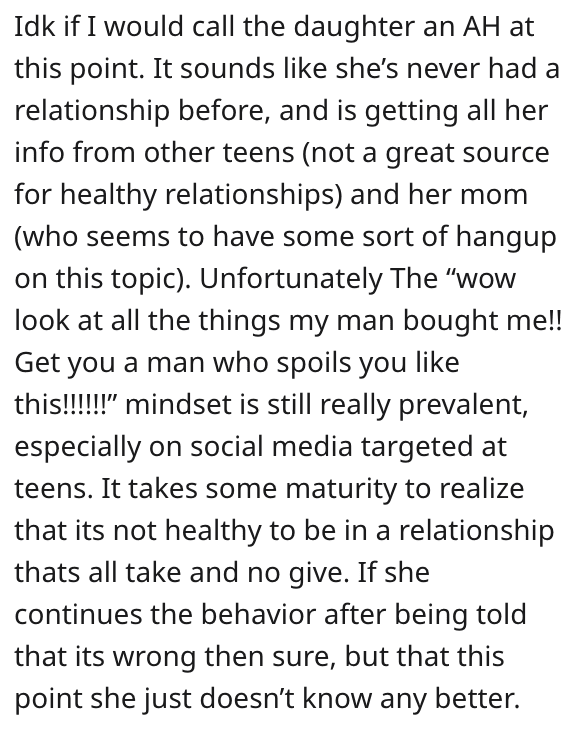 Okay, readers, now we want to get your opinion?

Share your thoughts with us in the comments. We look forward to hearing from you!