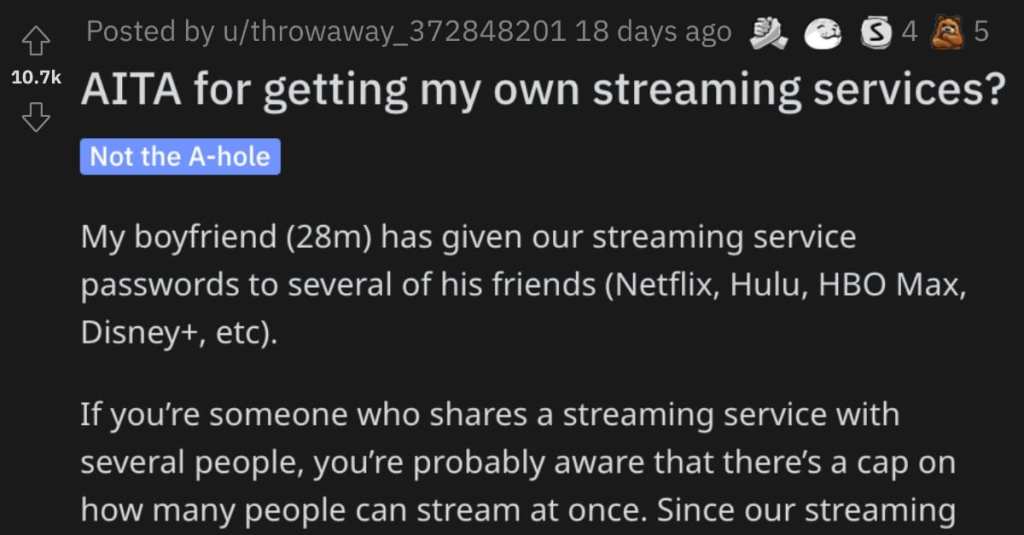 I’ve heard countless stories in the last little while about people figuring out how to use the streaming services of their friends and family members…and sometimes people get really upset at folks who aren’t buying these services on their own.

And here’s another tale of streaming service drama from a girl whose being called out for using their boyfriend’s passwords to watch all kinds of content.

Check out this story from Reddit’s “Am I The A**hole?” page.

AITA for getting my own streaming services?

“My boyfriend (28m) has given our streaming service passwords to several of his friends (Netflix, Hulu, HBO Max, Disney+, etc).

Whenever we try to watch a show or movie together and we can’t proceed because of limitations, he’ll excuse it by saying “we’ll just try later when they’re not watching.” The issue is someone is always watching lol.

My patience began to wear thin. So I told my boyfriend “I don’t mean to be nasty, but your friends are being freeloaders. They have jobs and if they want to use HBO Max, they can pay for their own subscription. It’s really hard to watch anything I, or we want to watch with so many people on.”

He told me I was being selfish and that since he pays for it, he can share it with whoever he wants to. So I subscribed to a few services on my personal devices and paid for them.

I was watching a show that I had been dying to watch on my laptop and my boyfriend asked if I wanted to watch something with him. I said “No thanks, I’ve been dying to catch up on this.” He then said “See? Just be patient, not everyone is watching all the time.”

I said “Oh actually I made my own account.” He got offended because he said he already pays for subscription services, so i’m just wasting my money and being childish.”

Now let’s see how readers responded to this story on Reddit.

This person said this person isn’t an a**hole and they can do whatever the hell they want with their own money. 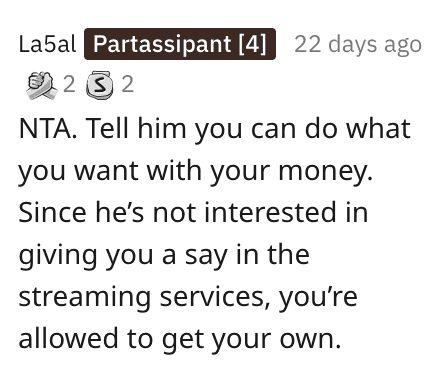 Another Reddit user agreed they aren’t wrong in this story and they offered a possible plan of attack to fix the situation. 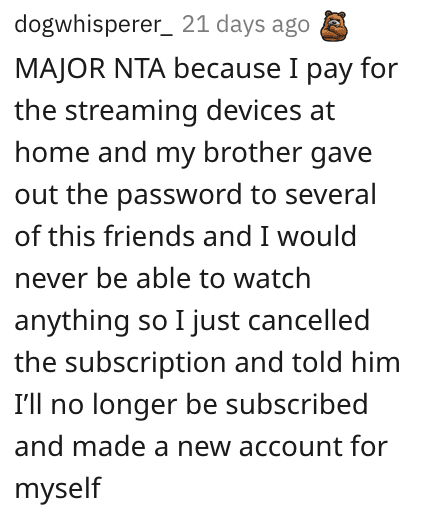 This individual said that the boyfriend in this story just seems to be majorly disconnected. 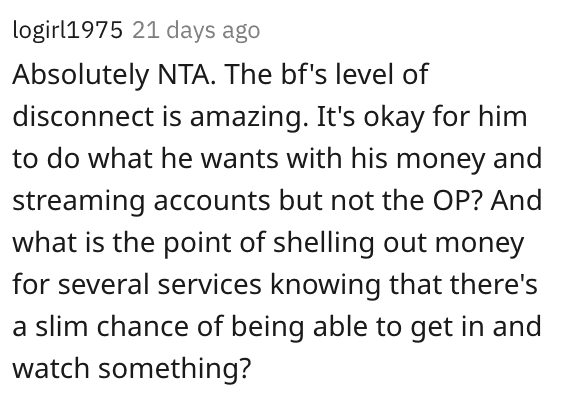 And this person said that they could relate because they had a similar situation…and they quickly realized how to fix it.

Do you think this person is acting like a jerk?