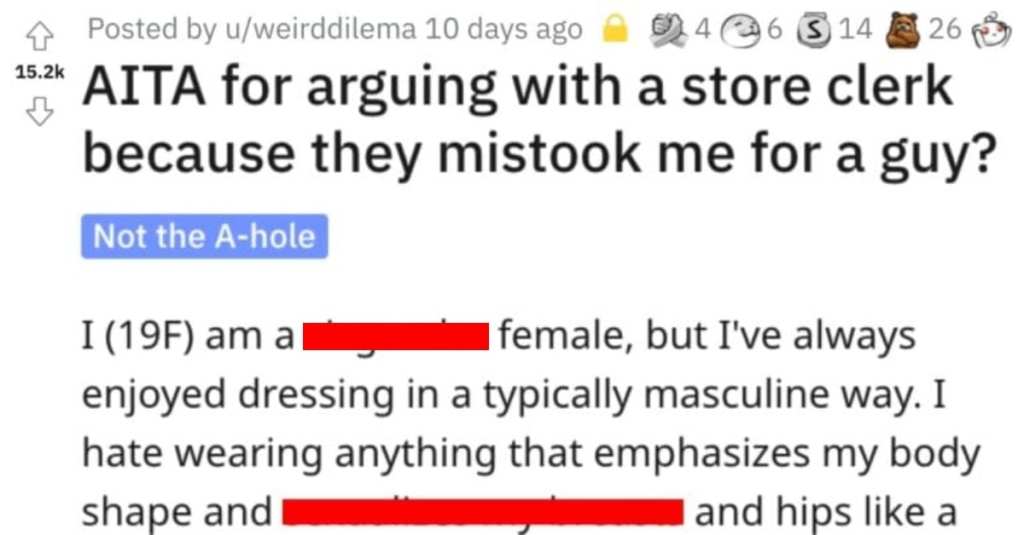 Woman Gets Into an Argument After She Was Called a Guy. Was She Wrong?

In case you haven’t been paying attention, gender is a hot-button issue these days and things tend to get heated.

And here’s another story from a young cisgender woman who was mistaken for a male. In case you don’t know, cisgender is defined as “a person whose gender identity matches their sex assigned at birth. For example, someone who identifies as a woman and was identified as female at birth is a cisgender woman.”

She shared her story on Reddit’s “Am I The A**hole?” page to see what people thought. Let’s take a look.

AITA for arguing with a store clerk because they mistook me for a guy?

“I (19F) am a cisgender female, but I’ve always enjoyed dressing in a typically masculine way.

I hate wearing anything that emphasizes my body shape and s**ualizes my breasts and hips like a lot of women’s clothes often do, I don’t wear dresses or heels or whatever clothes you’d normally associate with femininity, you get the gist. My go-to outfits usually involve a pair of baggier sweatpants, a plain T-shirt and sneakers.

I recently got my hair cut into a pixie though, and now people started mistaking me for a guy wherever I go. It’s usually not a big deal since I just correct them, they apologize, we laugh it off and move on.

Today however, as I was out shopping with my family, my mom walked up to a store clerk to ask her where the changing rooms were. The store clerk asks “For you or for the young man?” and I immediately tell her I’m actually a girl.

She shrugs it off, points us to the nearest changing room and goes “Well, he can change in there then.” and I correct her again. I thought okay, maybe she didn’t hear me at first, but she looked at me and said “Okay, okay” this time, so she definitely heard me.

After we’re done, we go pay for our clothes and the same store clerk says something along the lines of “That’ll be 30$ for you and 65$ for the boy, 95$ in total”. This is when I flipped my s**t and told her, in a not so polite of a way, that I was a girl and she was extremely rude for continuing to call me otherwise.

She rolled her eyes and argued back that if I look and act like a guy, I can’t expect people to refer to me as a female. This went on for a few more minutes before me and my mom eventually left the store.

I don’t feel like I was wrong to get angry. I don’t mind it when people misgender me by mistake and correct themselves after I tell them I’m a girl, but I feel like this woman did it to p**s me off on purpose.

And now let’s see how people reacted on Reddit.

This person said that the woman needs to be reported for her behavior. 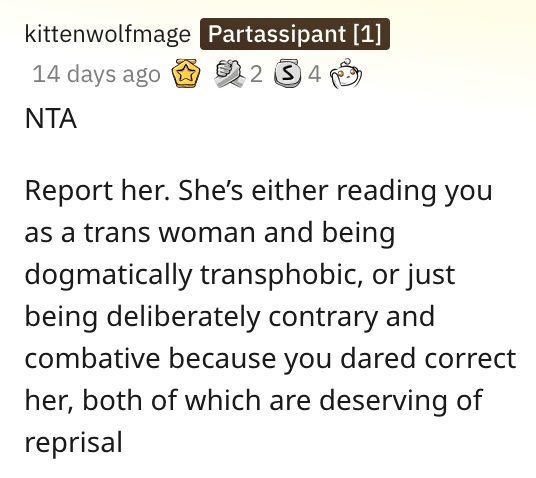 Another Reddit user argued that the woman was definitely doing this on purpose and went so far as to call her a bigot. 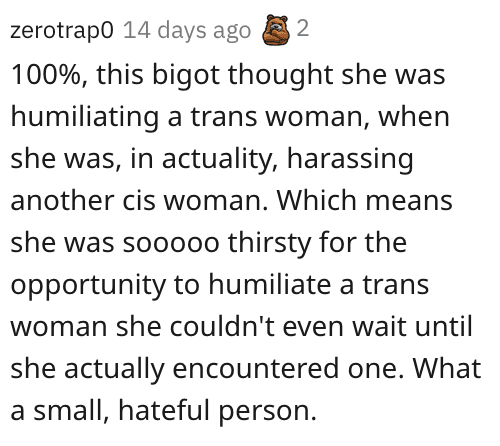 This reader called it “classic sexism” and said that they could relate to this story. 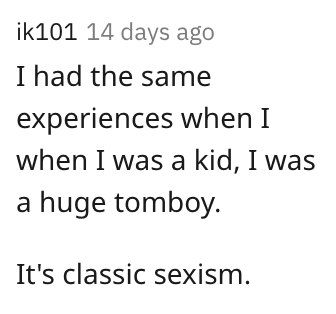 Lastly, this Reddit user made a good point: she can be both transphobic and s**ist at the same time. 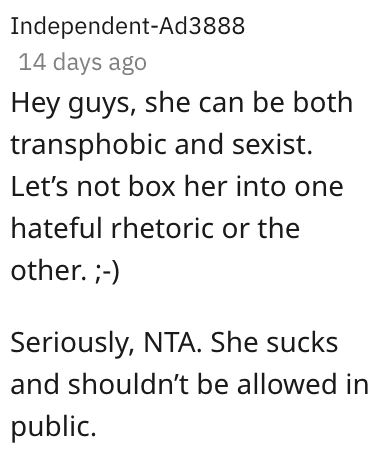 Do you think this young woman was out of line?

Or did she do the right thing?

Share your thoughts with us in the comments! Thanks!