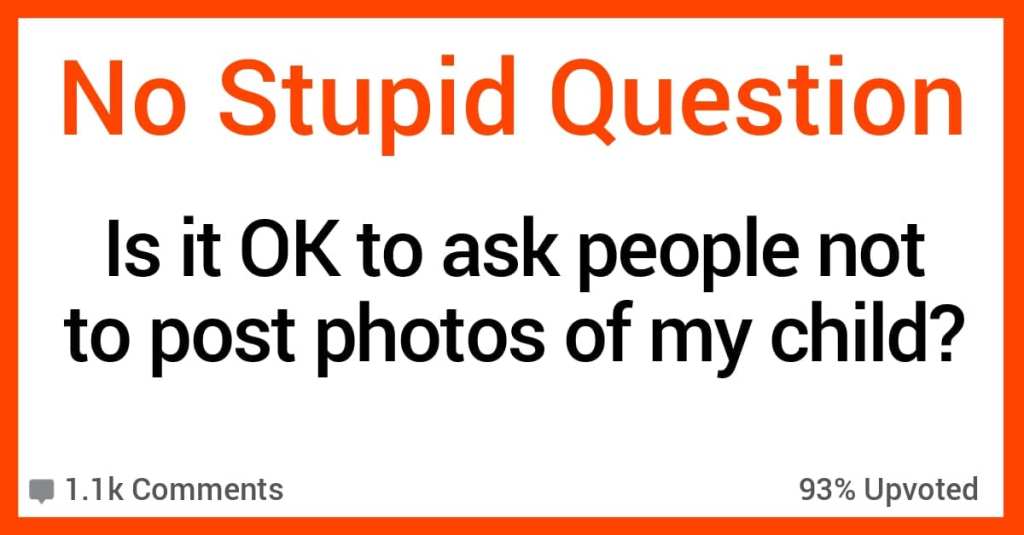 Person Asks, “Is It OK to Ask People to NOT Post Pics of My Kid Online?” 15 People Share Their Opinions.

Everyone has different rules when it comes to their kids and social media. Whether it’s screen time for them or how often we choose to share their images ourselves, parents’ expectations really run the gamut.

It seems to follow that we would ask others what they’re comfortable with – and then follow their lead with their kids – before posting pictures of minors on the internet.

Am I being unreasonable asking people to not post pictures of my kids on social media? from NoStupidQuestions

This woman is not finding that to be true, though, leaving the rest of us to realize, once again, that you can’t assume much of anything when it comes to human behavior.

Here are 15 people weighing in on what expectations are reasonable, and what might be expecting too much.

I have a friend who, in addition to never posting pictures, also asks that nobody ever say what her child’s NAME is on social media.

As a dad myself, do I think that’s crazy over the top levels of protection? Sure.

But do I also respect her wishes as a parent? Of course.

That’s not unreasonable at all. That’s your decision as a parent and anyone that argues might have their baby picture taking privileges revoked. I don’t blame you and it’ll be how I handle my children if/when I have them.

People need to respect your decisions. Don’t back down no matter what they say.

13. People have their reasons.

My biological father accidentally found out we had our daughter and we do not say her name or post her pictures on social media. He’s into little girls and our closest family knows and backs us 100%. The less he knows about her the better it is. We never mentioned the name part but it just happened organically and I didn’t realise till you mentioned it in the post.

It’s a special case for us but we’ve had no push backs from people not in the known.

People like you that respect our boundaries( even when it is over the top and you don’t know why) makes it so much easier for people in our situations.

I’d even say OP’s stance is the most reasonable possible. Remember how embarrassing it is for teenagers/young adults, to have photo albums with their baby pictures shown to friends or partners. Now imagine your parents had shared those pictures with the whole world.

People are way too careless about posting shit on social media and i applaud OP for not wanting to subject his/her baby to that.

It’s your job to protect their privacy until they are old enough to do it themselves. You’re doing exactly what you should be doing!

A family friend of mine recently had a baby (about 1.5 years ago). She’s made an Instagram page in the baby’s name where she posts embarrassing pictures of the baby with captions pretending to be the child – for example, captions like “Mama said I have to take a bath after soiling my diapers, but that ruins the fun!” and the like. I am mortified for her and feel bad for the child once the kid is old enough to read. It’s so painfully cringy and such a violation of the child’s privacy!

It’s bonkers to me that a parent could be so selfish & not consider the fact that eventually, their child will grow up, and the child won’t want their name and pictures plastered all over the internet from before they were even old enough to understand consent.

Not only is it reasonable, it’s responsible and forward thinking. There is no guarantee that any of our kids would thank us when they get older for posting pics of them online for all to see. If they want to share them one day then that’s their business.

The way I handled it was to set up a private group for close friends and family to share the occasional picture, but only because those people knew my kid in day-to-day life anyway. That said, my mother-in-law still kept reposting pics to Facebook until we threatened to block her.

I’ll double down on this, as an already established mother. I didn’t let people post pictures of my kid for a long time. Immediate family is allowed to post pictures now, because they respected my boundaries. More than that, they respected me as I figured out what my boundaries were. I needed to figure out as a mother what felt appropriate, what felt like an overshare.

If OP wants to keep their children off the internet, especially after their previous experience, absolutely everyone needs to respect that wish. There is no reason the child’s picture is needed online.

It would be good to look up what the laws are in your area, as chances are posting a picture of your child on social media would constitute “publication”, and you would have to provide permission for that.

I’m a drama tutor for after school classes and whilst the business I used to work for would encourage us to post on Instagram, I refused to do so unless I had consent from the parents. Too easy for a business to get sued.

I have asked my family to consult me/us prior to posting any photo of our kids or ourselves.

Most do, but a few wanna tease me or argue with me.

I do not talk to them anymore.

My kids, my life, my decisions.

Privacy is a right, which you should be able to exercise whenever possible

My sister is pretty adamant about not using social media.

The kids are teens now and they have their own accounts but post very rarely.

It’s a personal preference and I think it’s a pretty reasonable one.

3. It’s not all that uncommon.

I know numerous people who exercise their right to keep the image of their baby private.

2. And not just reserved for babies.

My aunt and her spouse specifically had a sign outside their wedding ceremony location entrance requesting that while photos were allowed, they were not to be shared on social media.

That same announcement was also made immediately before the ceremony started.

AFAIK, nobody shared anything.

You aren’t being unreasonable at all.

My husband and I decided before Baby was even born that he wasn’t going to have on online presence until he could fully appreciate what that meant, and decided he wanted one. Meantime we send pics and vids of him through WhatsApp etc, but his relatives on both side of the Atlantic know that none of these images or vids are for wider dissemination, full stop.

I feel pretty badly for the generations who have had their whole lives put on the internet without their knowledge or consent. Family vloggers are gross, becoming a meme clearly has some downsides, and it’s been pretty well proven that excessive exposure to social media had a deleterious effect on a person’s self-esteem. I want my kid to be aware of what he’s getting into.

Can’t we all just respect each other? I’m starting to think the answer is not really.

What are your rules when it comes to your kids and social media?

Let’s compare in the comments!