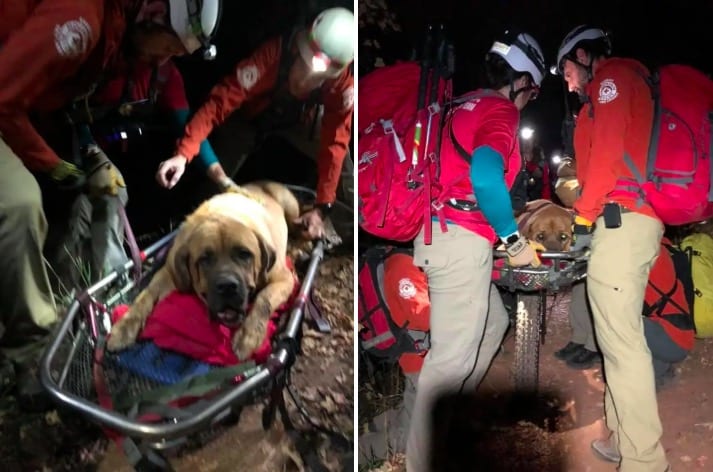 Floyd the dog found himself in quite the pickle recently. He hiked with his human companions all the way up a mountain in Utah. But when it was time to go back down, Floyd was way too tired to complete the journey.

If Floyd were a Chihuahua, his exhaustion would be no issue. His owner could just pick him up and carry him home.

But Floyd happens to be a 190-pound Mastiff. None of his human family members were capable of transporting him down the mountain. So, they called for help — and that’s how Floyd ended up being calmly loaded onto a stretcher by the Salt Lake County Search and Rescue team.

The family had started the three-hour hike around noon. Amy Sandoval, the sister of Floyd’s owner, says they ended up on a “very tricky slope” after taking a wrong turn on the descent.

“We had a 10-year-old with us and it was so hard getting everyone back up to the trail.

Poor dog just couldn’t take any more after that.”

She says Floyd’s owner never left his side. He was even willing to wait there with him overnight if necessary, despite the cold weather. The family also gave Floyd their remaining water, opting to go without themselves.

Todd Taylor, one of the rescuers, told Buzzfeed News:

“They were sitting up there for a few hours.

[Floyd] would walk a few feet and then sit down and his paws were hurt and cut up.”

Thankfully, some fellow hikers called 911, and the all-volunteer rescue team came to help. They carried Floyd down the mountain on the stretcher. It took four hours.

He is now happily relaxing at home, recovering from the ordeal.