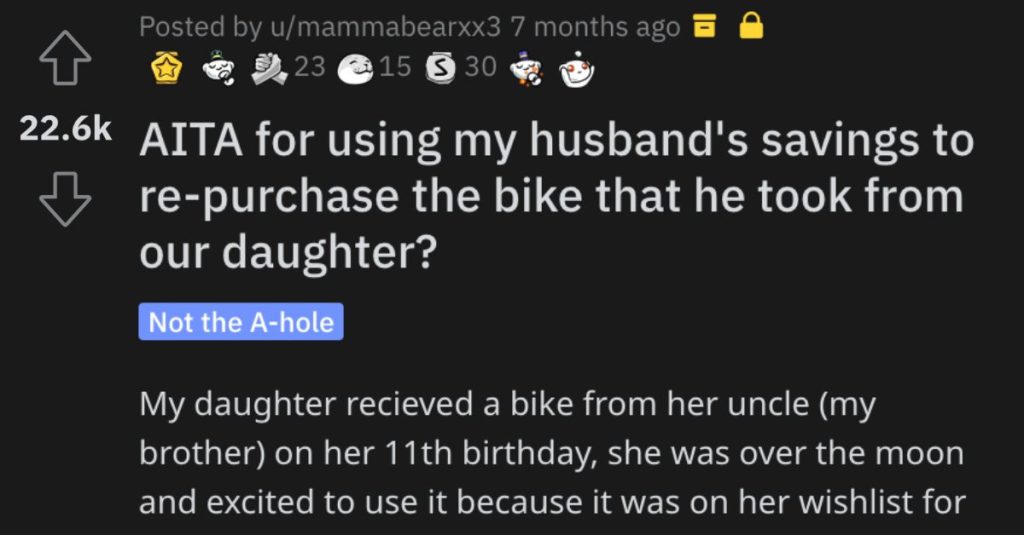 She Bought Back the Bike Her Husband Took From Their Daughter Using His Money. Was She Wrong?

I’ll be rebuying that, thank you very much!

Oh, boy, this promises to be quite a story from Reddit’s “Am I the A**hole?” page!

Check it out and see if you think this woman stepped over the line.

AITA for using my husband’s savings to re-purchase the bike that he took from our daughter?

“My daughter received a bike from her uncle (my brother) on her 11th birthday, she was over the moon and excited to use it because it was on her wishlist for so long.

Days ago, I discovered that my husband reached out to my brother to ask for the recipient for the bike and returned it to the store and kept the money for himself while my daughter was at school (the bike was at home). My daughter and I got home and she started crying after noticing the bike was gone.

My husband was home at the time, he told me he returned the bike and got money in return to spend on something useful for us since the bike was just there as a “distraction” and there was no need for it now since it’s winter.

I was aggravated and lost it on him saying it wasn’t his, didn’t come from him, and he didn’t pay for it so he had no right to touch it ESPECIALLY knowing our daughter’s been wanting it for a long time and my brother was decent enough to buy it for her despite barely having money to get him by.

I told him what he did was theft and insisted he hand over the money to me so I could re-purchase it but he said he spent it on stuff for the house and doesn’t have any money left now but I knew about the money he was stashing away in the bedroom that he forbade me from touching and I took some of it and went out to re-purchase the bike while he was out the next day.

He found out and verbally lashed out at me saying I should’ve never touched the money he was saving for himself which isn’t much but I lashed right back that I had to so I could re-purchase the bike he took from under our daughter. He explained that he didn’t keep the money for himself and instead spent it for necessities for our home but he was at fault for taking the bike in the first place and he was responsible for getting it back. He yelled at me for almost 10 minutes then stormed outside and started s**king.

My daughter asked why her dad was upset and that she no longer wants the bike if dad doesn’t want her to have it, but I assured her that’s not the case and told her she shouldn’t feel guilty and to just focus on enjoying her bike.

My husband hasn’t stopped grilling me about how I disrespected and undermined him and managed to make our daughter h**e him after making him look like the bad guy, I again said he shouldn’t have touched the bike, end of the story.

He’s called me a thief and juvenile for taking money from his savings and being sneaky about it.

AITA for the way I got the bike back?”

One person said she’s NTA and that her husband sounds pretty controlling. 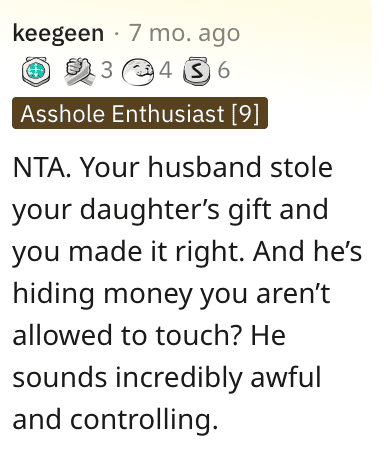 And this Reddit user also said she’s NTA and that she should get her daughter away from him. 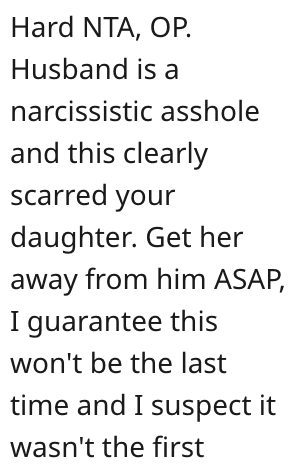 This individual went so far as to say this woman and her child are in danger because of this man.