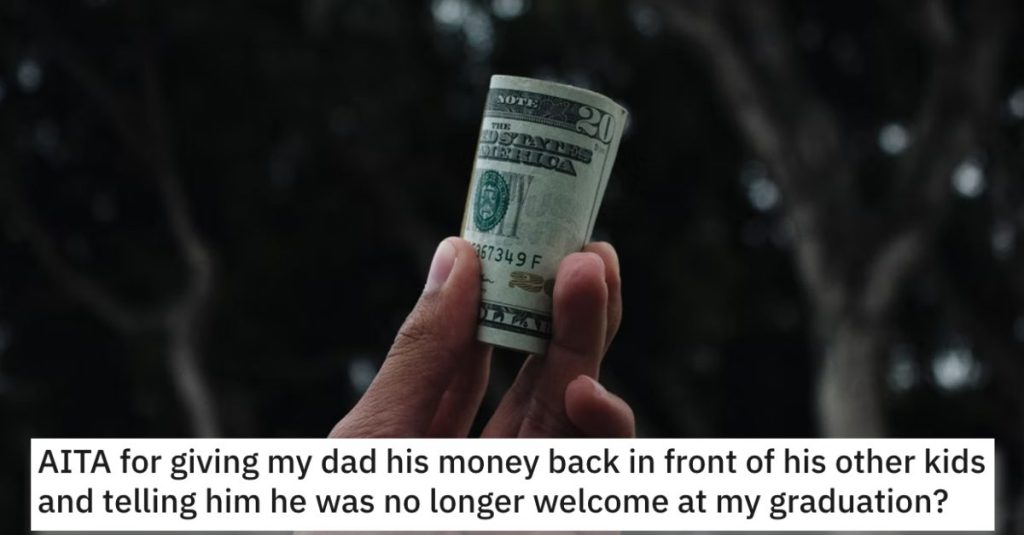 And the person who wrote this post is clearly fed up…but did they go too far in the way they treated their dad?

Take a look at this story and decide for yourself…

AITA for giving my dad his money back in front of his other kids and telling him he was no longer welcome at my graduation?

“My graduation ceremony is being held next week. My dad had given me some money in advance to pay for the party. I live mostly with my mom but they were supposed to be hosting the event together.

Dad and I have a rocky relationship. After my parents divorced when I was 4 they split custody of me and he was able to stay a good dad. When I was 10 he met Jane. Jane had three kids, twins and a single kid. They got married when I was 12 but I would say even before that I felt like he prioritized her kids over me a lot.

He would cancel plans with me if they wanted to do something and would either do the thing with them or force me to go and say it was even better than our plans, when for me it wasn’t. Think going for a hike with me vs taking them to an indoor play area. Or seeing a movie with me vs the kiddie park. One more example is when I was given a ticket for a concert my dad and I both love.

He was supposed to buy a ticket to come with me for some father/son time, but actually spent it on his youngest step kid who wanted their room painted. He told me at the last minute and it hurt. There are other times stuff like this happened.

He didn’t show up at the hospital when I broke my arm because one step kid was getting their tonsils out and wanted both him and his wife there. He told my mom over the phone to tell me he was proud of me for being brave and understanding, even though I never said that s**t.

When I would bring this stuff up to him he’d tell me it was natural to feel jealous of sharing his attention. That was all he would say.

In 2019 he told my mom he would split the cost of a trip I wanted to go on with one of my clubs, because she didn’t have the money all by herself. Mom had her half saved. We told my dad he needed to pay. He said bills were tight and it was the twins birthdays and the money needed to go on something for them.

He told me we could do something as a family when the trip happened instead. I told him to forget it. That he was making it clear who was more important and I was going to stay with my mom where I actually mattered. Mom borrowed money to cover the other half of the trip.

Dad told me he regretted making me feel less important and we were working on things and then the graduation money was given about a month ago. Then a week ago he called and told me how one of the stepkids was being bullied, how bad of a time they’re having it, and with that money they could help cheer them up for their birthday. I was pissed. I hung up.

Then two days later I showed up at his doorstep, gave him the money and told him I didn’t want to see him or his new family at my graduation, and that he had chosen who was more important so he better stay out of my life. His stepkids and two younger bio kids were there. I didn’t stick around. He called and told me we needed to talk it out like adults, and that I had hurt the kids feelings. His wife freaked out on me so I blocked her.

One reader said they are NTA and that their father chose other people above them. 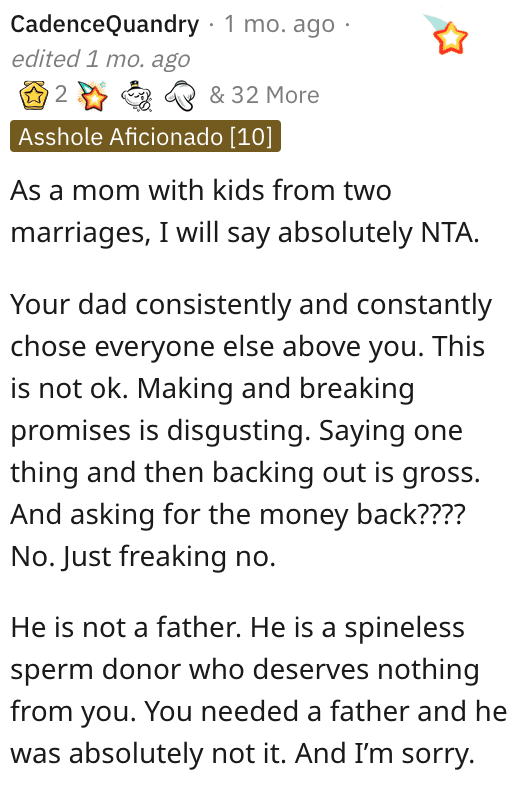 And this individual could relate to this story… 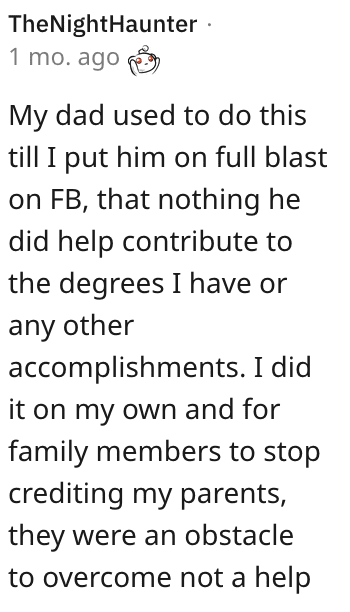 Another Reddit user said that this person’s stepmother is part of the problem here. 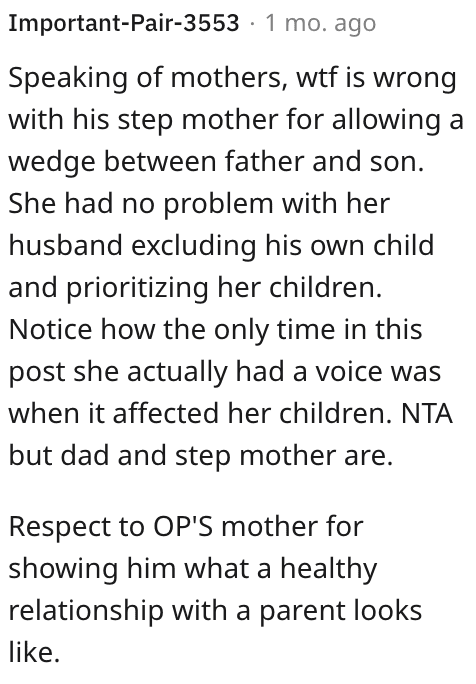